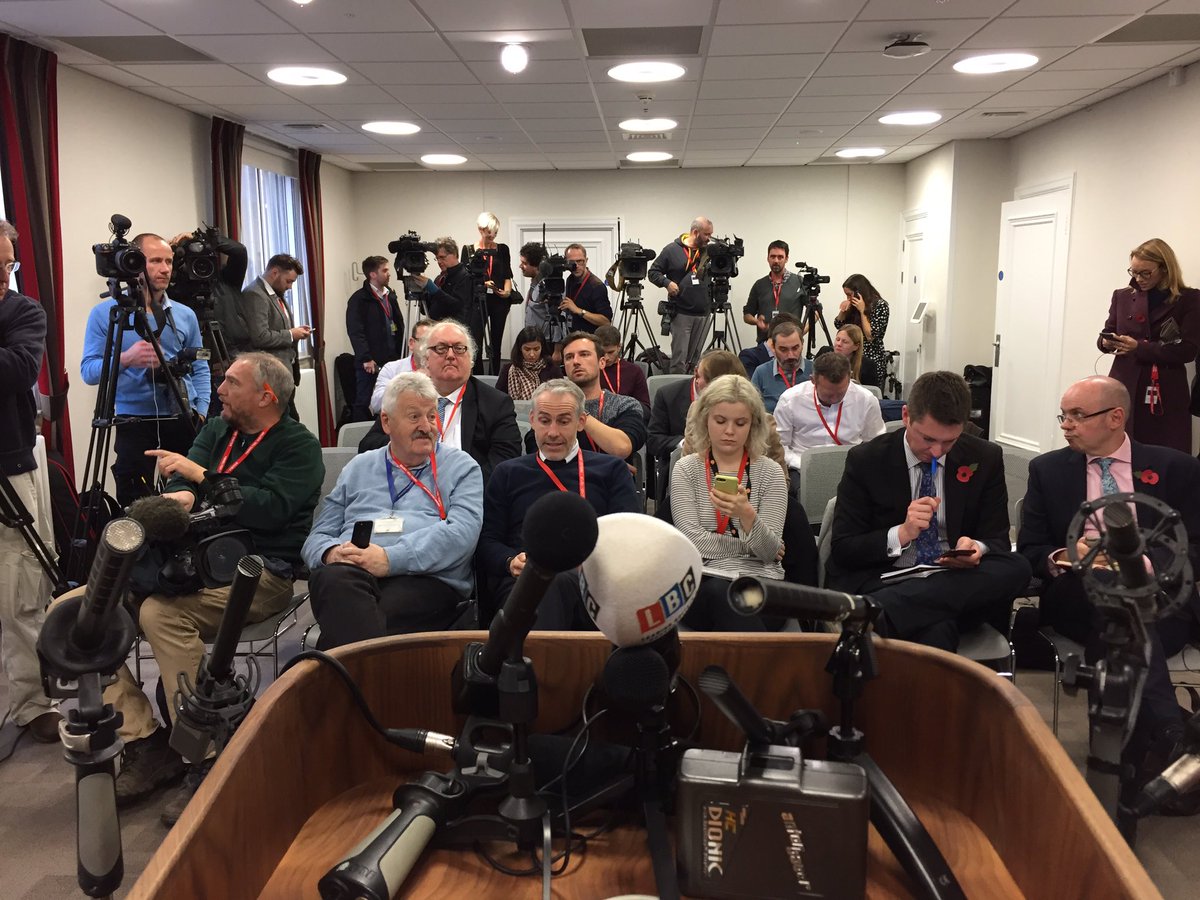 Following a meeting with the Labour Assembly group this afternoon – reportedly said to be “inconclusive” – the First Minister made a statement at Cathays Park; his first official statement since the death of Carl Sargeant earlier this week.

His voice cracking, Carwyn Jones said it has been “an awful time for everyone” and he acknowledged the “great hurt, anger and bewilderment.”

Paying tribute to Carl Sargreant he said he had never had an argument with him and he had served Wales “with distinction”, driving through the most legislation of any other Minister by sheer will.

He criticised “inacuracies in the press” but believed it would be inappropriate to go into any detail as it’s subject to a Coronor’s inquest and the Sargeant family deserve answers to their questions.

He maintains that he handled the accusations “by the book” and “had no alternative but to take the actions he did”. There’s a legal process to go through and he welcomes scrutiny of his actions in the future, which should be done independently.

He ended by saying Wales, “has lost a person of great warmth, ability and charisma”. These were some of the darkest days for the Assembly, but we all needed to remember that they were even darker days for Carl’s family.

So, Carwyn stays on.

Judging by the levels of media interest there was perhaps an expectation he would resign – and it’s unlikely those calls will end based on this statement.

Calls for Carwyn to stand down mainly came from those close to either the Sargeant family or close friends of Carl himself, as well as a Tory MP and UKIP – the latter saying they will seek to table a motion of no confidence in the Assembly.

Crucially, there haven’t been any calls for a resignation from Labour AMs and I suspect that if there is a no confidence motion tabled soon, Carwyn would likely survive. Whether backbenchers start to have misgivings will probably come down to what was said in the meeting earlier today and whether they were convinced or not.

I’ve tried to piece together what’s known so far.

The First Minister attends a meeting with the Prime Minister, after which he requests a meeting of party leaders in the Senedd to discuss their handling of harassment allegations against staff and elected members.

Reportedly, he’s informed around this time of allegations against Carl Sargeant but sources told BBC’s Vaughan Roderick (and, later, ITV’s Adrian Masters) that the First Minister knew long before then and a previous allegation – which now formed part of this investigation – was already dealt with and explained. This hasn’t been confirmed.

The initial investigation is handed to the First Minister’s special advisor, Matt Greenough, who spoke to the women involved.

The Llywydd, Elin Jones (Plaid, Ceredigion), confirms that a cross-party meeting on harassment would be held the following Tuesday.

Rumours start circulating that a cabinet reshuffle was imminent and Carl Sargeant could lose his post as Communities Secretary as part of a wider plan to promote some of the new intake of AMs.

The reshuffle; Carl Sargeant loses his job. Following the meeting with the First Minister, he releases a statement demanding an “urgent investigation” and a chance to clear his name, denying “shocking and distressing” allegations made against him about his “personal conduct” but also saying the details were not given to him. He hopes to rejoin the government at a later time, but is suspended by the Labour Party.

The First Minister says Carl was “removed”/sacked and that the allegations were the reason behind his decision.

Carl Sargeant is later informed via e-mail by Louise Magee – General Secretary of Welsh Labour – that he’s being investigated for “unwanted attention, inappropriate touching or groping”.

Matt Greenough and colleagues are pictured “celebrating” in Cardiff city centre that evening (take it with a pinch of salt, given the source).

Deryn Consulting’s Cathy Owens (a former Labour special advisor) appears on Sunday Politics Wales to recount her personal experiences of sexual harassment saying there were “sexual predators” in politics who were being protected by their parties and that parties didn’t have appropriate procedures in place. Finance Secretary, Mark Drakeford (Lab, Cardiff West), also appears saying harassment shouldn’t be tolerated at the Assembly.

The First Minister gives an interview broadcast on both BBC Wales and ITV Wales, insisting he only knew about the allegations last week and that following “multiple allegations” against Carl Sargeant (via the initial investigation) he had no choice but to refer the matter to the party – though he confirms the police are not involved.

Huw demands to know the specifics of the allegations so Carl can prepare his defence and be satisfied with the “transparency and legitimacy” of the procedure. He also demands details of how the initial complaint was dealt with. The “anxiety and distress” caused to his client is made apparent and he raises the possibility that the complaint’s handling by the First Minister and the Cabinet Office impacts its impartiality and could lead to evidence being manipulated.

An anonymous Labour AM criticises the fact the matter was dealt with by the First Minister’s staff and not the civil service because Carl Sargeant was a crown appointment – so should’ve kept his job, pending an inquiry under the Ministerial Code.

Carl Sargeant dies. All Senedd business is suspended for the week amidst a palpable sense of shock.

Outside his home in Bridgend, the First Minister gives his first comments on camera since Carl Sargeant’s death, saying he was “saddened” and that the Sargeant family’s desire for privacy needed to be respected.

Carl Sargeant’s family later release the correspondence between his legal team and the Labour Party (above), saying he had been denied “natural justice” – sentiments echoed by Jenny Rathbone AM (Lab, Cardiff Central) and other anonymous Labour figures. There are some calls for the First Minister to resign over his handling of the matter.

Lobbyist, Daran Hill, visits the Sargeant family and says people in Connah’s Quay were angry that the First Minister was due to explain the matter to AMs before the family. The Coroner confirms an inquest into Carl Sargeant’s death will open on Monday (13th November).

Leighton Andrews publishes a blog claiming Carl Sargeant was a “workplace target” and there was a “toxic atmosphere” within the “Fifth Floor” (Welsh Government offices at the Senedd) that included bullying, favouritism and personal undermining/misinformation that impacted his own and Carl’s mental health. He made a complaint to the First Minister in the autumn of 2014 but this was never formally investigated.

The First Minister attends a Labour group meeting at the Assembly and afterwards makes the statement at Cathays Park saying the due legal process must be respected, defending his actions as “by the book”.