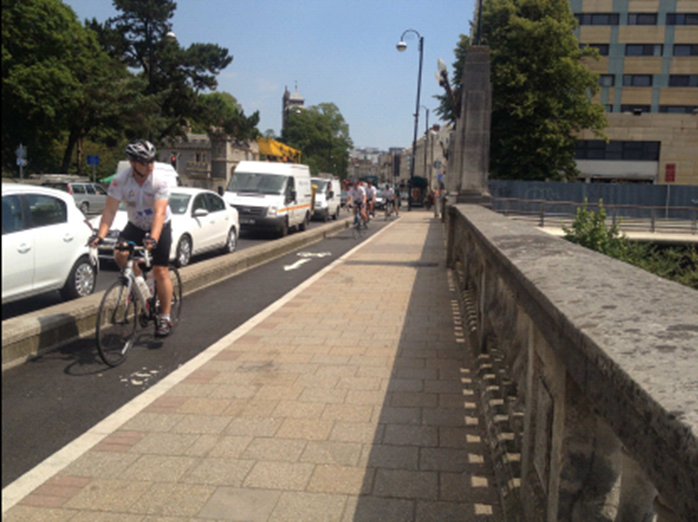 “The Act was never going to change Wales overnight, but there are lessons to be learnt about delivery to date. This report and the recommendations contained in it seek to challenge the Welsh Government to deliver a generational change in this key policy area. If Wales is to deliver on the promises made in the Act, we need to see long-established behaviours start to change.”

1. A lack of leadership and direction

It was hoped that the Act will have increased the uptake of walking and cycling, but figures have remained static and in some cases (i.e. walking to school) have actually gone backwards.

Local authorities were tasked with carrying out mapping exercises to determine what routes are used and what routes can be further developed, but this was hit-and-miss, with it often being left to “enthusiastic” junior council officers without much leadership from above.

Some witnesses even blamed the mapping exercise to diverting resources and time away from delivery on the ground. With only a share of £700,000 to work with, Bridgend Council told the Committee that their share only covered a third of the cost.

However, local authority planners and engineers had to make realistic bids because they felt the money wasn’t there. Also, because the Act places a requirement on “continuous improvement”, councils focus on smaller bit-by-bit projects. Active travel routes were also said to be “the first thing squeezed out” by developers when negotiating with planning authorities.

Wales currently spends £3.30 on walking and cycling per head each year (~£10.2million), compared to £6-per-head in England and £20+ in the Netherlands and Denmark.

The Committee called for Wales to aim to spend between £17-20-per-head on walking and cycling each year (which works out at between £52.7-62million annually) and if the extra money can’t be found it should be redirected from other transport projects. The wider health benefit of a £62million annual spend is estimated at up to £870million.

Coincidentally, the Welsh Government recently announced they were going to spend £20m a year (£6.45-per-head) for the next three years on active travel.

A number of councils felt the mapping exercise would raise expectations amongst the public about what walking and cycling projects could be delivered. Others told the Committee that engagement with the exercises was “minimal” or didn’t reach the people who don’t regularly walk or cycle.

There was also criticism that there wasn’t enough focus on the disabled and different types of disability – people with sight problems, for example, are going to be affected in different ways to wheelchair users.

4. The associated guidance is too specific

Following the Act’s approval, the Welsh Government issued new design and audit tools for active travel routes. Some witnesses believed these tools were inflexible, citing the example of developing routes in the valleys which would probably fail to meet gradient criteria. Cardiff Council called for the Welsh Government to provide examples of the sort of infrastructure they would like to see.

There were also specific challenges in delivering active travel routes in rural areas (due to the state of minor roads) and challenges facing disabled users who can’t dismount from their bike when told to by signs.

Some contradictions in the audit tool emerged where the health impact assessment gets worse if you develop routes that reduce journey times by foot or by bike (because you reduce the amount of physical activity).

5. Our behaviour needs to change

It might be a bit obvious, but the main obstacle to getting this to work is….us. As a society we’re over-reliant on cars and, outside Cardiff, don’t really walk or cycle that much.

Infrastructure was said to be only one way of solving it, with the Director of Public Health Wales saying, “You can build a cycle path, but it doesn’t mean to say people will use it”; for example, the Welsh Government ended its support for a successful walking scheme (Let’s Walk Cymru).

One policy option raised during the inquiry was the Welsh Government using its recently-devolved powers over speed limits to introduce a blanket 20mph speed limit in urban areas.