In something that’s become an annual tradition, the Tories held a debate on veterans’ affairs in the run-up to Remembrance Day.

Mark Isherwood AM (Con, North Wales) started by noting the multi-cultural makeup of the Commonwealth armies during the First World War. While he welcomed commitments by the Welsh and local governments to honour the armed forces covenant there hasn’t yet been an independent review of its progress or delivery.

“The covenant states that no-one who has served in the armed forces should face disadvantage, and, in specific circumstances, can expect special consideration, in regard to their NHS care. Despite this, however, veterans and their families have faced inconsistencies when accessing healthcare in Wales, with the third and charitable sectors often having to deliver the specialist and rehabilitation services they need.”
– Mark Isherwood AM

He called on the Welsh Government to consider the creation of an Armed Forces Commissioner – later supported by UKIP’s David Rowlands – to improve the accountability of public organisations when it comes to delivering the covenant.

Neil McEvoy AM (Ind, South Wales Central) went one step further and tabled an amendment calling for a No Soldier Left Behind Act to guarantee housing and healthcare for veterans. This was also supported by UKIP and Caroline Jones AM (Ind, South Wales West). Neil said a number of veterans have said the covenant wasn’t working and one, Gus Hales, has gone on hunger strike to demand better support.

“I know that this Welsh Labour Government is extremely proud of the 385,000-strong armed forces community across Wales, and we are highly committed to the principles of the armed forces covenant. As I’ve stated to the Public Services Secretary, I think it is important that we continue to strengthen the veteran unit within Welsh Government and further drill down into assessing any potential gaps in service delivery that need to be addressed.”
– Rhianon Passmore AM (Lab, Islwyn)

Dr Dai Lloyd AM (Plaid, South Wales West) recounted the experiences of his grandfather during the First World War (in Welsh, with English closed captions):

Mohammad Asghar AM (Con, South Wales Central) honoured the “loyalty and heroism” of Commonwealth forces; 150,000 soldiers from India served on the Western Front during the First World War and 12 Victoria Crosses were awarded to soldiers from the Indian subcontinent. Darren Millar AM (Con, Clwyd West) honoured Irish veterans of the First World War, including his great-grandfather.

Janet Finch-Saunders AM (Con, Aberconwy) wasn’t happy that the Welsh Government had rejected the idea of an Armed Forces Commissioner on cost grounds; “What cost is one life?”

“I want to pay tribute to my father, John Mervyn Jones, born in 1910 in Cwm Aman, Aberdare. He joined the Royal Naval Reserve in 1938, not because he was young and naive, he was a 28-year-old schoolteacher, not because he was seeking adventure or longing to fight, he was one of the gentlest men I’ve ever known and he had seen his uncle come back broken and destroyed from the First World War; fighting was not what my father would have wanted to do. He didn’t even join out of patriotism, but he had seen the rise of fascism in Europe, and he was convinced that the only way to defeat fascism was to fight.”
– Helen Mary Jones AM (Plaid, Mid & West Wales)

Replying on behalf of the government, Public Services Secretary, Alun Davies (Lab, Blaenau Gwent) said it was important to recognise the family impact of conflict; it was ordinary people who upheld our freedoms.

“I think it is important to recognise that when we talk about the losses that this country has suffered in terms of maintaining our freedom, our society, our communities and our democracy, these are people—they are fathers and mothers, wives and husbands, brothers, sisters, sons and daughters—and we all know people who have suffered as a consequence of conflict.”
– Public Services Secretary, Alun Davies

The Welsh Government supported nearly all of the Conservative motion and although they reject the idea of an Armed Forces Commissioner, the Secretary accepted the importance of public services being held accountable with regard to the covenant.

While the Tories didn’t agree with the government amendment – which replaced their call for an Armed Forces Commissioner with the liaison officers bit – they ultimately backed the final version of the motion.

Neil McEvoy’s amendment calling for a “No Soldier Left Behind Act” was rejected by 6 votes to 27 with 18 abstentions. The Conservatives abstained because it referred solely to soldiers and not the armed forces as a whole, while Plaid Cymru was willing to keep an open mind but didn’t think a law was necessary at the moment. 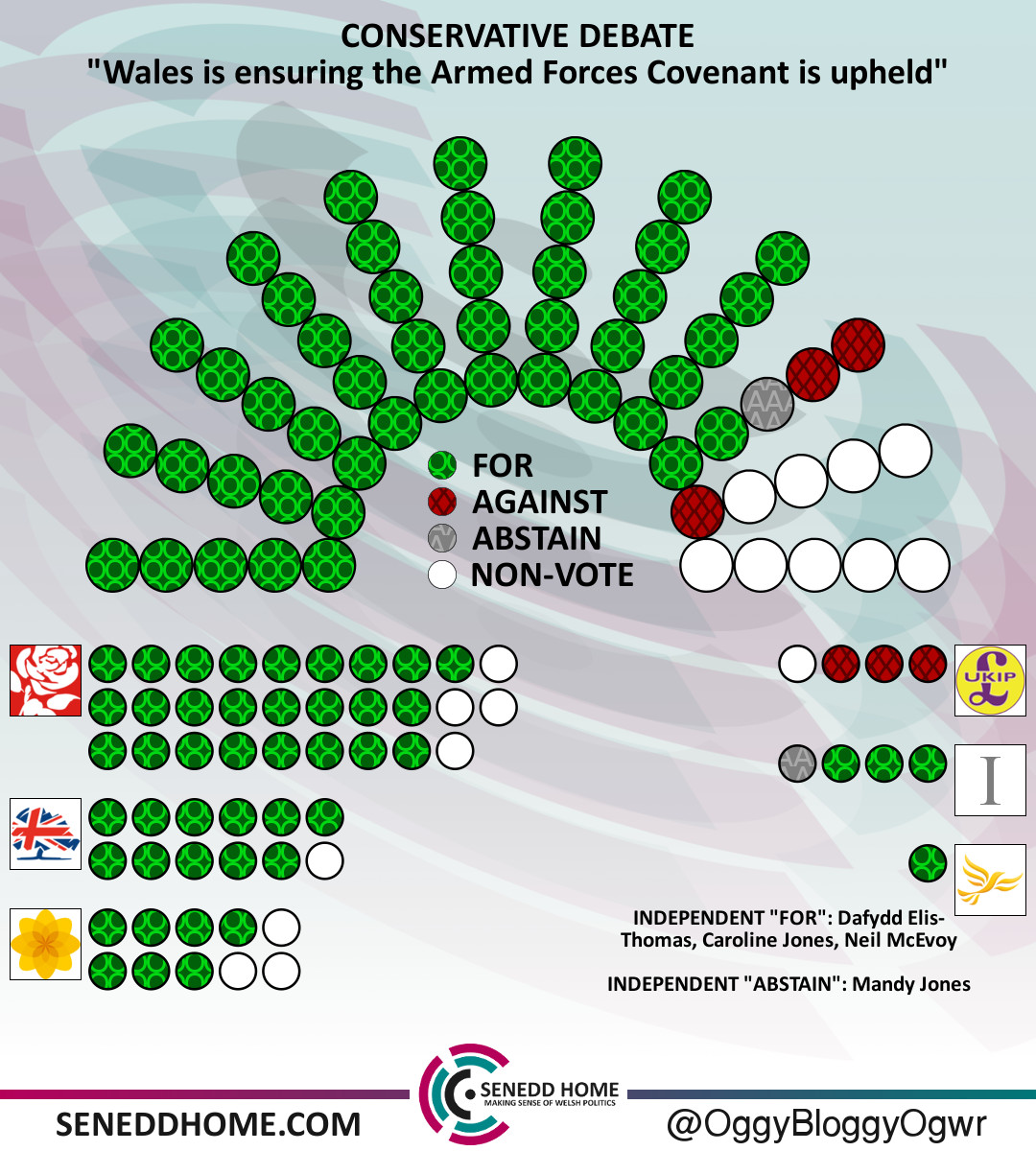