The Senedd, in accordance with Standing Orders:

Finance Secretary, Mark Drakeford (Lab, Cardiff West) said the budget marked a significant milestone in devolution as Welsh rates on income tax will be set for the first time – he confirmed there would be no changes for 2019-20.

He warned that the short-term and long-term impacts of Brexit and continued austerity would be “profound” and if the UK Government had maintained public spending in line with economic growth, Wales would’ve had £4billion more to spend this year. A number of changes will be made in the final budget to take into account additional money coming to Wales as part of the UK budget including extra cash for local councils and extended business rate relief.

Opposing the draft budget, Darren Millar AM (Con, Clwyd West) said this was a “record-breaking budget” and the Welsh Government had received more money than ever before. He bemoaned increases in land transaction tax for commercial land sales over £1million, saying it was a traditional Labour temptation to tax and spend.

“Now, this is a budget, which you’ve presented to this house, that delivers real-term cuts yet again in the education budget, with schools set to receive £12 million less next year than in the current financial year. We already know that 40 per cent of schools are already operating with a budget deficit, and that looks only likely to rise. Is it any wonder that Estyn have concluded today that half of our secondary schools have shortcomings?”
– Darren Millar AM

David Melding AM (Con, South Wales Central) said the Welsh Government’s house-building record hasn’t been great and, should Mark Drakeford win the Labour leadership, called for the creation of a Cabinet-level post for housing.

Rhun ap Iorwerth AM (Plaid, Ynys Môn) described it as an “austerity budget”, but was bound by an agreement with Labour to abstain. He raised the issues facing local government and he didn’t believe they’ve been treated fairly by the Welsh Government.

“But this budget also reflects broader problems within Government and its failure to think and to act holistically when it comes to budgetary decisions, and a failure to take preventative steps now. Cutting funds from crucial preventative services provided by local government is, of course, going to increase the pressure on our health service.”
– Rhun ap Iorwerth AM

Former Finance Minister, Jane Hutt AM (Lab, Vale of Glamorgan) couldn’t believe that Wales was in a similar position now as it was when an emergency budget was passed by the Conservative-Lib Dem coalition in 2010. Similar sentiments were expressed by Rhianon Passmore AM (Lab, Islwyn) who concluded that the draft budget was doing as much as possible to support essential public services.

Neil McEvoy AM (Ind, South Wales Central) said the budget “didn’t meet the needs of Wales” and cuts to local government funding, in particular, were having a real impact on the ground with basic services being cut or withdrawn. He wanted plans for a tourist tax to be revived and for the “bedroom tax” to be abolished in Wales (as it is in Scotland).

Mercifully, I don’t have to go through the observations of the individual Committee Chairs as I’ve already summarised their respective findings here.

The vote was a formality due to the budget agreement between Labour and Plaid Cymru – of which this is the final year. That explains the Plaid abstentions.

A vote on the final version of the budget is scheduled for 15th January 2019. 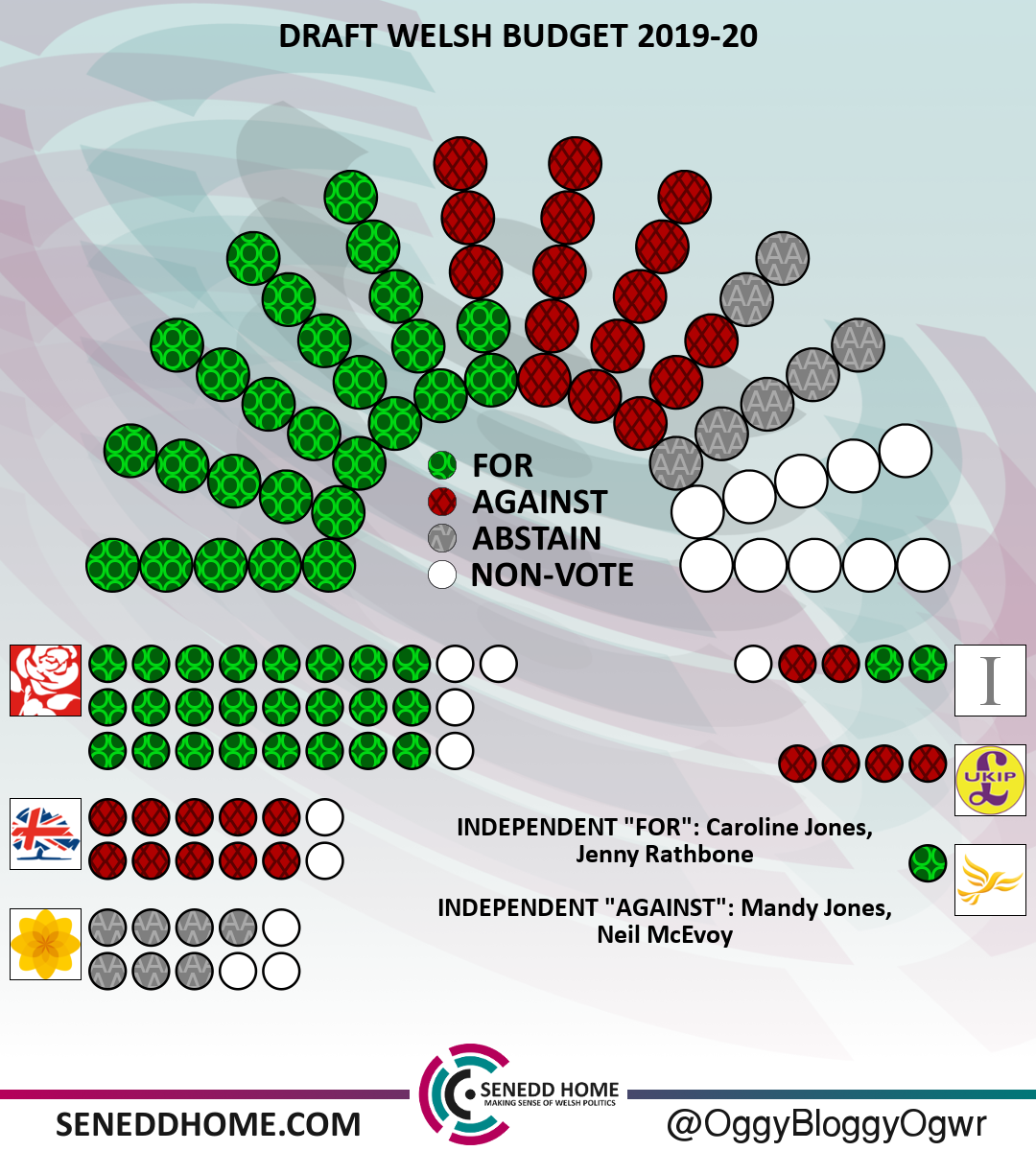