Following Tuesday’s vote in the UK Parliament – which hasn’t provided any clarity at all on where we’ll be on March 29th – the Senedd held yet another Brexit debate.

Far from clarifying matters, Tuesday’s vote has “confused things further” according to the Counsel General and Brexit Minister, Jeremy Miles AM (Lab, Neath). The Welsh Government now outright supports extending Article 50 beyond March 29th – but this would require the consent of the EU’s 27 member states and an extension has to be requested as a matter of urgency.

“Any other mature democracy, faced by the challenge of the sort posed by Brexit would have seen a Government seeking to build a broad-based consensus about how to move forward in admittedly difficult circumstances. But the UK Government manifestly failed to reach out. Rather, it embarked on a narrow partisan strategy to unite the Conservative Party, not the country; a strategy based on red lines, self-imposed deadlines and on an inability to listen to or respect the legitimate interests of the other party in the negotiation.”
– Counsel General & Brexit Minister, Jeremy Miles

The scale of the defeat in the vote on the deal at the start of January would normally have lead to the Prime Minister’s resignation, he  added. There were promises of cross-party consensus which quickly turned into “going around in circles” putting the UK on the road to nowhere.

It’s our responsibility “to provide direction and hope”

Plaid Cymru leader, Adam Price AM (Plaid, Carms. E. & Dinefwr), said that while it was easy to get depressed at the situation it was the Senedd’s responsibility to provide some direction and hope, but the UK has succumbed to kicking the can down the road – a “new national sport”.

“Mrs May will go back to Brussels for the second time and try over the next fortnight to convince her EU counterparts to reopen negotiations, which they will again refuse to do, and the end result of this is that we are skidding towards a ‘No Deal’ Brexit that Parliament said it doesn’t want but will be the default outcome unless Article 50 is extended, which, paradoxically, Parliament voted against last night. Westminster, in essence, yesterday willed the end of blocking ‘No Deal’ without willing the means of backing a viable alternative.”
– Adam Price AM

The only choices left facing us, he said, were a “No Deal” or a “People’s Vote” – history will judge politicians harshly if they didn’t do everything to stop a completely avoidable disaster.

Shadow Brexit Minister, Darren Millar AM (Con, Clwyd West) accused Labour, Plaid Cymru and the Lib Dems of being an “unholy alliance wishing to frustrate Brexit”. The Tories can’t be accused of wanting to “kick the can” if the other parties want to extend Article 50. Mark Reckless AM (Con, South Wales East) said that to avoid a “No Deal” the withdrawal agreement needs to be changed so it’s acceptable to the House of Commons.

“I’m alarmed at the toxic nature of the debate about our future relationship with our EU partners, and that should be a worry for all of us. Daily talk of a wartime mentality, being in the trenches, the spirit of the blitz; this is not what our relationship with the other 27 EU nations is about. At times, I feel that we’re only one step away from calling our EU colleagues ‘Johnny Foreigner’. For goodness’s sake—the EU did not bring us to this mess.”
– Dawn Bowden AM (Lab, Merthyr Tydfil & Rhymney)

Alun Davies AM (Lab, Blaenau Gwent) said the situation has changed from being promised an additional £350million a week for the NHS, to talk of troops on the street and martial law; “It’s not a great success, is it?” He refused to be told to respect referendum results when the Conservatives long campaigned for multiple referendums on devolution. Mick Antoniw AM (Lab, Pontypridd)added that the likes of Jacob Rees-Mogg calling for parliament to be prorogued was “sheer insanity”.

Hefin David AM (Lab, Caerphilly) was reluctant to support a second referendum as it would be a sign of weakness in representative democracy – however, he was willing to back the motion as it says a second referendum should only take place as an option of last resort.

There seemed to be a change of heart on a second referendum from another heavyweight on the Labour backbenches too:

“…..circumstances have changed in the last two years. I do not see why we now cannot ask people to express a view in the light of current circumstances. Surely, Brexiteers or Remainers, we will spend all our time debating what Brexit should look like without asking the people. So, let’s settle the question once and for all and settle the question by asking the people.”
– Carwyn Jones AM (Lab, Bridgend) 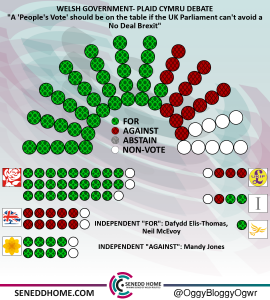