Yesterday, the Senedd debated and ultimately approved the final Welsh budget for 2019-20.

AMs also unanimously approved a motion for the Welsh rate of income tax to remain unchanged.

In terms of the main changes from the draft budget:

In spite of these challenges, we continue to deliver in difficult times. We continue to prioritise investment in the Welsh NHS, education and social care. We are investing in our schools and colleges, creating the health service of the future, building an economy with real social purpose.”
– Finance Minister, Rebecca Evans (Lab, Gower)

Chair of the Finance Committee, Llyr Gruffydd AM (Plaid, North Wales) welcomed the fact that promises local government would be at the front of the queue for extra money has been kept but criticised the general lack of information available for scrutiny of in-year budget changes.

Shadow Finance Minister, Nick Ramsay AM (Con, Monmouth), hailed the new tax-varying powers and the additional fiscal responsibility that would come with it, however:

“I do welcome the additional funding for Natural Resources Wales. We know the difficulties that that organisation has been through over recent years, having its accounts qualified for yet another year running. Can we have an assurance that this money comes with conditions, and that the Public Accounts Committee’s recommendations will be fully implemented so we can avoid some of the havoc that we’ve seen over recent years in that organisation?”
– Shadow Finance Minister, Nick Ramsay AM

Not enough cash for councils?

As a prelude to the next debate on the local government settlement, Rhun ap Iorwerth AM (Plaid, Ynys Môn) said the Welsh Government still failed to realise the depth of problems in local government and while the increase in available money was welcome, it didn’t come close to what was necessary.

One of the sharpest critics of the budget actually came from Labour’s backbenches:

“I will be supporting the budget today but I would be failing in my duty to my constituents if I failed to raise the serious concerns I have.

Firstly, I have seen no evidence that the budget has been driven by either the programme for government or by the future generations legislation. What this budget has done….is increase the share of the Welsh Government budget spent on health and reduce the proportion spent on local government and other services, with some protection for the economy and transport….the percentage of the Welsh budget allocated to health would reach 60 per cent if the current policy continues.”
– Mike Hedges AM (Lab, Swansea East)

It’s very rarely you’ll hear any AM, let alone a Labour one, argue to spend relatively less than health, but Mike underlined the fact that too many people were using hospitals as primary care services, too many people were being prescribed ineffective treatments and nowhere near enough has been done to prevent poor health.

Huw Irranca-Davies AM (Lab, Ogmore) accepted the difficulties the government faced but pointed towards some of the smaller positive announcements; making the case to locate a modern art gallery in Port Talbot, money to support tree-planting and measures to improve access to music and the arts in schools. 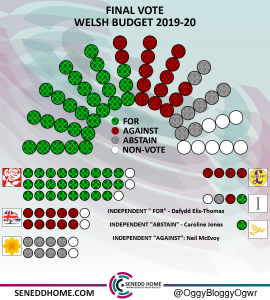