“The context for rail delivery in Wales is complex, fragmented and underfunded. The current railway settlement was designed before the advent of devolution. Although some efforts have been made to evolve it, the current settlement is still a reflection of the times in which it was created. Twenty years on from devolution, the Secretary of State for Transport in Westminster retains ultimate control of railway infrastructure here in Wales.”
– Economy & Transport Minister, Ken Skates

The formula used to fund rail infrastructure is based on rail use, which advantages urban areas – in particular, the south-east of England – over everywhere else.

He added that if Wales receives its fair share of rail investment money in light of HS2 spending in England, over ten years there’s the potential for re-opened lines, the full electrification of the northern and southern mainlines and new stations which could boost the Welsh economy by up to £2billion.

Transport for Wales was also performing better compared to the same time last year, with 95.1% of services arriving within 5 minutes of departure times (90% UK) and the number of cancelled services (1.6%) being lower than last year (2.1%).

The Conservatives were, of course, going to defend funding in Wales, leading to back and forth between AMs over who had the right facts:

Later on, Mark Isherwood AM (Con, North Wales) – a keen user of statistics – said Wales received 6.4% of net government funding for Network Rail, higher than our UK population share of 4.9%.

Rhun ap Iorwerth AM (Plaid, Ynys Môn) told the chamber it takes him 6 hours to make a journey by rail to Cardiff Bay from his constituency and he pays £101 return for the privilege on an outdated train….without so much as a cup of tea for refreshment. Like many other speakers, he made the case for investment in his area – particularly the re-opening of the Gaerwen-Amlwch line to help stimulate the Anglesey economy in light of recent bad economic news.

Reassurances in the regions

Jenny Rathbone AM (Lab, Cardiff Central) said rail and light rail had an advantage over road transport by being somewhat predictable in terms of journey times. However, the pace of change has to be quicker; it’ll take 28 years to get the Welsh rail network up to standard.

Alun Davies AM (Lab, Blaenau Gwent) – who’s quickly becoming something of a thorn in the side of the government – did make a surprising comment:

“….there is no support in Ebbw Vale or Blaenau Gwent for any service to Newport. This was established as a service linking the Heads of the Valleys with the capital, and that is a service that we want, and we do not need a commuter service, either, I’m afraid to say, for Newport or for Cardiff.”
– Alun Davies AM

Rhianon Passmore AM (Lab, Islwyn) disagreed; she was looking forward to Newport-bound services. It was just a shame that UK law passed under John Major prevents a public operator providing rail services.

“The metro and the proposed global centre of rail excellence offer us exciting opportunities, where Wales can be known for cutting edge rolling stock rather than the prolific, prehistoric pacers that we’re currently saddled with. But the challenge….is how to manage customer expectations….when we’re still changing over to the new rolling stock.”
– Vikki Howells AM (Lab, Cynon Valley)

Huw Irranca-Davies AM (Lab, Ogmore) made his case for investment on the Maesteg line; a promised loop to enable half-hourly services was cancelled when Network Rail withdrew funding for a signal box upgrade at Tondu and invested in south-east England instead. He repeated demands for pinch points such as Pencoed level crossing to be removed to enable faster services between Cardiff and Swansea. 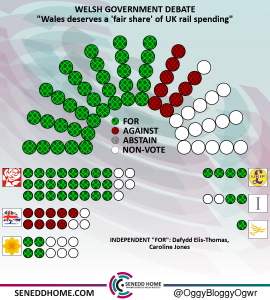