Progress being made? Or burying bad news?

Health Minister, Vaughan Gething (Lab, Cardiff S. & Penarth) said the report showed that clear progress was being made and the Welsh Government’s harm reduction approach was reaping benefits, with a slight fall in the number of drug-related deaths compared to 2017. The Welsh Government now spends about £50million a year on substance abuse measures.

Waiting times for treatment have improved and 86.5% of those who started treatment saw their substance abuse fall – an increase from the year before. A £17.3million programme will offer peer mentoring for out-of-work substance abusers to help them find employment.

Shadow Communities Minister, Mark Isherwood AM (Con, North Wales) didn’t believe there had been a decline in drug-related deaths:

Availability of the highest tier of drug treatment (Tier 4) was also inconsistent across Wales and Mark accused the Welsh Government of “burying” independent reports on drug treatment.

“Why would we not do this?”

Leanne Wood AM (Plaid, Rhondda) said that while the UK Government recently announced a review of drugs policy, they’re pre-judged it by specifically ruling out decriminalisation and legalisation. She called for Wales to draw inspiration from Portuguese drugs policy:

“As well as decriminalisation, Portugal allocated greater resources across the drugs field, expanding and improving prevention, treatment, harm reduction and social reintegration programmes….The Portuguese experiment has been a huge success – levels of drug use are now below the European average; drug use has declined among those aged 15 to 24. Lifetime drug use among the general population has increased slightly, in line with trends in comparable countries. However, lifetime use is widely considered to be the least accurate measure of a country’s current drug use situation.”
– Leanne Wood AM

There was a clear public health reason to change our approach to drug abuse and Leanne supported piloting medically-supervised safe injecting zones.

Joyce Watson AM (Lab, Mid & West Wales) praised the positive changes the report highlighted in relation to alcohol abuse, while Caroline Jones AM (Ind, South Wales West) called for better access to mental health services to prevent people falling into the trap of substance and prescription medicines abuse in the first place. 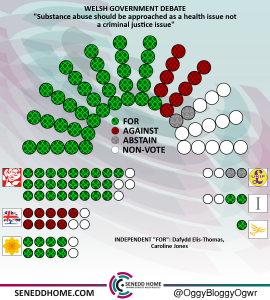