A record of failure

“We’ve already had, of course, three major economic strategies launched by the Welsh Government since the creation of this Welsh Parliament. And I put it forward today: all have failed to boost the regional growth, failed to drive forward Wales’s economic Welsh economy, and failed to create sufficiently well-paid jobs, and failed to create productivity. Wales is currently the weakest, slowest growing economy in the UK, still lagging behind Scotland considerably.”
– Shadow Economy Minister, Russell George

Despite facing similar structural challenges to Wales, many of England’s regions were experiencing robust growth; it’s clearly not the UK Government’s fault Wales is lagging behind. However, there were stark differences between different regions of Wales, later pointed out by Mohammad Asghar AM (Con, South Wales East):

“In 2017, GVA per head was less than £15,000 in the Gwent Valleys. In Newport, the figure was over £23,000 per head. It is a fact that, if you compare the GVA per head of all the local authorities in the United Kingdom, Blaenau Gwent is in the bottom five.”
– Mohammad Asghar AM

Nick Ramsay AM (Con, Monmouth) said using tax powers to generate wealth – as well as regional growth deals – had to be part of the solution; Mark Reckless AM (Con, South Wales East) continued to press for a Newport bypass decision to improve connectivity between southern Wales and Bristol.

Wales, even now, compares less favourably within the UK than former East Germany and southern Italy within their respective nation states. Nonetheless, he accepted the Conservative’s argument on regional differences within Wales and put forward a legislative remedy:

“What I would want to see is a Bill being developed whereby there would be a requirement on Government to demonstrate that they do give due regard to regional fairness and equality in their expenditure decisions in the same way as the Future Generations Act requires the Government to think whether their decisions are beneficial for future generations.”
– Rhun ap Iorwerth AM

Sian Gwenllian AM (Plaid, Arfon) said the situation in rural parts of Wales was reaching a tipping point, with mass out-migration of young people and per-capita income levels being some of the lowest in Europe.

Mike Hedges AM (Lab, Swansea East) told the chamber the only regions and nations in the UK which are net contributors to the UK Treasury are London and South East England. He partly blamed the inability in Wales to turn medium-sized companies into large ones.

Economy & Transport Minister, Ken Skates (Lab, Clwyd South), said the Welsh Government’s Economic Action Plan will enable all parts of Wales to work to their strengths. He also expects regional development policies to be decided in Wales after Brexit:

“It’s worth saying that in a post-Brexit environment, of course, we expect Wales not to lose out to a penny in terms of the investment that we would expect and that we wish to see decisions on economic development and investment made here in Wales.”
– Economy & Transport Minister, Ken Skates

City and regional growth deals would play an important part, but they weren’t a panacea; long-term it requires wealth redistribution away from the south-east of England to the rest of the UK.

He then announced that from this spring his department will publish budgets showing how much is spent on economic development in each region of Wales. 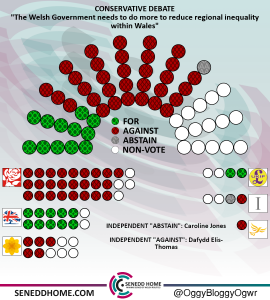