Andrew RT Davies AM (Con, South Wales Central) believed there were mixed feelings in bringing forward this debate. Supporters were still celebrating the recent Grand Slam, but uncertainty in the regional game cast a shadow. He appreciated the WRU’s apology and clarification that there would be no Ospreys-Scarlets merger for 2019-20, but a long-term threat to the four-region model remains.

“The financial structure and challenges currently facing rugby are there to see – sadly reflected in the failure of Welsh regions to make to this season’s knock-out stages of the Champions Cup. At present, we simply don’t have the resources to compete with England and France. We have to be clever, nimble and creative with what we’ve got.”
– Andrew RT Davies AM

While the national men’s team punches above its weight, that success had to translate to the regional game. The Welsh Government has a responsibility to protect the game, not just sit on the sidelines, while the WRU had to properly engage with supporters on change.

Dr Dai Lloyd AM (Plaid, South Wales West) called for better marketing of the Pro14 off the back of the national men’s team’s success:

“Let’s market the Pro14 properly. There’s very swish marketing of the English Premiership. We deserve that in Wales….Attracting more money to the game in Wales, obviously, is the huge challenge, but we are in a strong position….”
– Dr Dai Lloyd AM

Mike Hedges AM (Lab, Swansea East) cited three main problems. Firstly, poor attendances; no region averages more than 10,000 supporters a game. Secondly, TV income for the Pro14 is lower than England and France, making it more difficult for the regions to compete off the pitch. Finally, the weak grassroots game, where clubs are losing scores of players aged 16-19 and attendances are often in double-figures.

Rhun’s local club in Llangefni has a thriving youth section and plays fixtures across the region against similarly strong sides; he supported efforts to bring professional rugby to the north:

“I delight in seeing the young boys that I train being selected for youth teams in north Wales….creating idols in their own region, would be a major step forward….and I hope that the endpoint will be to bring professional rugby to north Wales, taking nothing away from the excellent professional teams we already have in the south. “
– Rhun ap Iorwerth AM

Huw Irranca-Davies AM (Lab, Ogmore) argued that at the very least the Welsh Government needs to support keeping the Six Nations on free-to-air TV:

“There are things that we know the value of and then things that we know the cost of. And if you look at the tragic tale of the England Cricket Board selling the rights to Sky in 2004, at big money that they reinvested in their game, and over 10 years the number of adults players in cricket dropped 20%. There were 6.6 million people who watched live coverage of the Wales vs England Six Nations match….So, let’s not put it behind a paywall.”
– Huw Irranca-Davies AM

Replying on behalf of the government, Deputy Minister for Culture, Dafydd Elis-Thomas (Ind, Dwyfor Meirionnydd), told AMs that while Labour backbenchers would have a free vote, the government would abstain.

“…the changes we have seen in the game emanate from its growth as a global sport, and an important part of that….was that rugby sevens became an Olympic sport and created an interest in nations that traditionally hadn’t played the game….And that, of course, is a challenge to societies and communities that have followed rugby traditionally, but also to professional rugby and to the decisions that have to be taken as a result of these changes.”
– Deputy Minister for Culture, Dafydd Elis-Thomas

He stressed that the Welsh Government provides ample support to grassroots rugby already, particularly at school and youth-level. While the government has taken a “professional interest” in the WRU’s plans they were in no position to tell them what to do.

Sian Gwenllian AM (Plaid, Arfon) and Rhun ap Iorwerth AM joined government AMs and both Joyce Watson AM (Lab, Mid & West Wales) and Carwyn Jones AM (Lab, Bridgend) in abstaining. 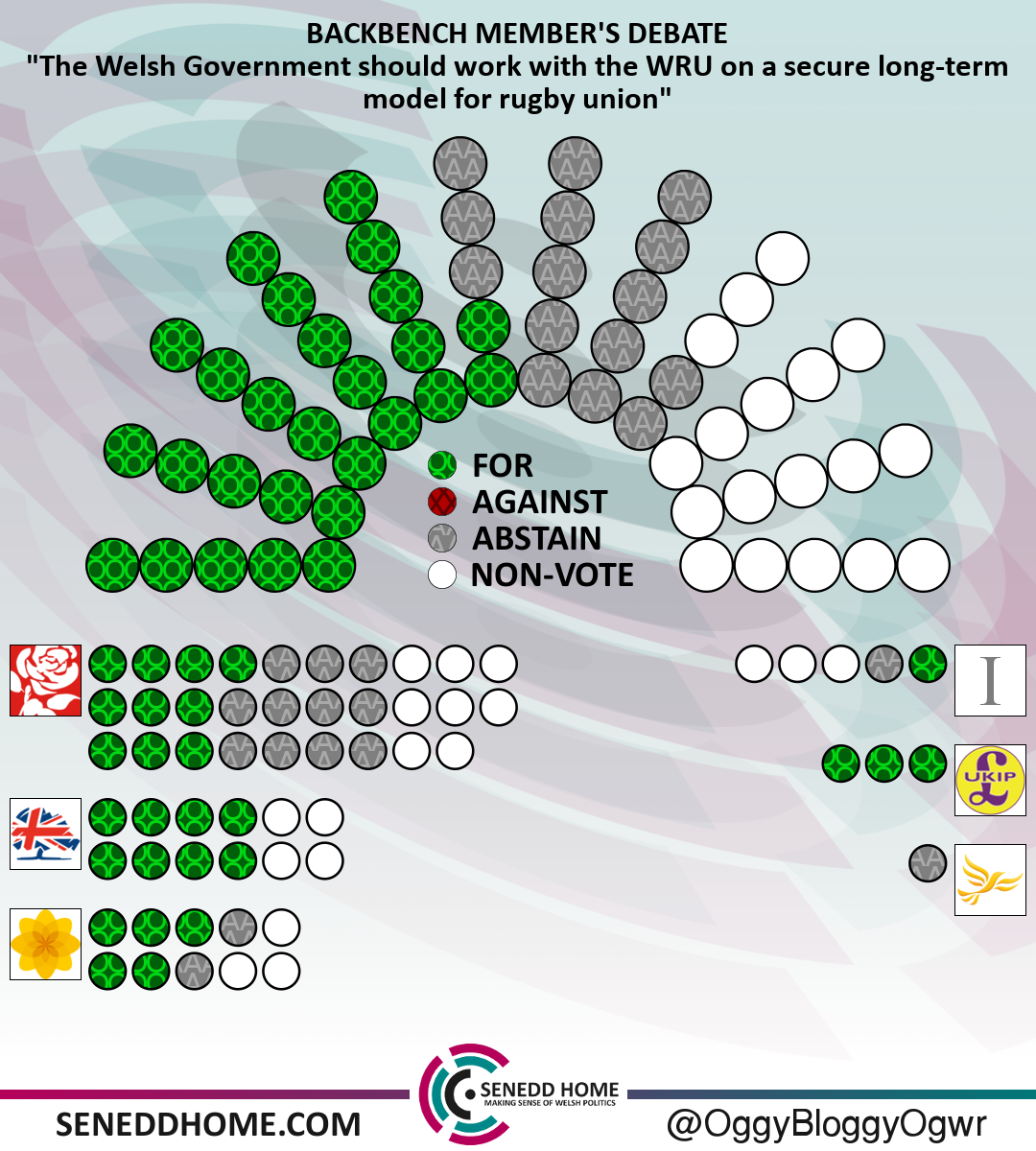