“….of the three economic plans that have been launched since devolution, not one has succeeded in improving earnings or economic output, and the Welsh economy is still the weakest economy in the UK. It has the lowest productivity levels across the UK and of course, those stagnant pay packets are holding us back…. it’s disappointing when we do have those tweets – as was listed on the trade and investment tweet – ‘come to Wales, we’ve got 30% lower salary costs than some other parts of the UK’.”
– Shadow Economy Minister, Russell George AM

He went on to list a number of failings including not doing enough to attract foreign investment, not reforming public procurement procedures to benefit small businesses (22% of Welsh Government procurement spending went outside Wales), and a failure to deliver major infrastructure projects on time and on budget – namely the M4 Newport bypass.

Suzy Davies AM (Con, South Wales West) criticised the Welsh Government’s record on due diligence when it comes to business support: “when you are using my constituents’ money to back a horse, you’d better know how to read a form book”. The UK Government also deserved praise – as did the Welsh Government in some cases – for falls in unemployment.

Mark Isherwood AM (Con, North Wales) said research and development spending in Wales was at a much lower level than the rest of the UK, while Mohammad Asghar AM (Con, South Wales East) said adult learning and upskilling were vital for Wales to meet the challenges of the future.

Rhun ap Iorwerth AM (Plaid, Ynys Môn) said there was no lack of ambition on the part of the government, but there’s been a lack of clear direction and lack of economic fairness; Plaid proposes an economic summit and a law which would ensure economic development spending is more evenly spread across Wales and not over-concentrated in and around Cardiff.

Mike Hedges AM (Lab, Swansea East) called for more long-term and joined-up thinking on the economy. Skills within the economy department itself need to be improved to avoid poor due diligence when it comes to business support, and Wales needs to learn lessons from the likes of Dundee – an otherwise provincial city which has become a key hub for digital technologies and has supported a successful games development industry off the back of working with universities on developing specific degrees.

“….what I don’t want is a Government that stands by on the sidelines as a steel company goes to the wall; a Government that fails to invest in electrification of rail in Wales….that fails to recognise and invest in tidal technology; that puts obstacles in the way of public or not-for-profit ownership of rail or water….and to see a devastating indictment of a laissez-faire approach to the economy.”
– Huw Irranca-Davies AM (Lab, Ogmore)

“I think if we’d said to those in the Chamber who were here 20 years ago that rates of economic inactivity in Wales will be broadly comparable with the UK….we will have halved the proportion of working-age people with no qualifications….we’d significantly increase the proportion of higher education qualifications and more active enterprises than ever before….That we have now, in 2019, 300,000 more people in jobs than there were 20 years ago – I think they’d have thought that a reasonable achievement.”
– Deputy Minister for Economy & Transport, Lee Waters (Lab, Llanelli)

Of course, the Deputy Minister accepted that beneath the headline figures, problems remain – in particular, in-work poverty. AMs couldn’t ignore the fact that many of the main economic levers remain controlled by the UK Government, nor could they ignore the negative impact of austerity. The focus was now shifting on to maximising the value of jobs which are already here and rooted in local communities – known as the Foundational Economy. 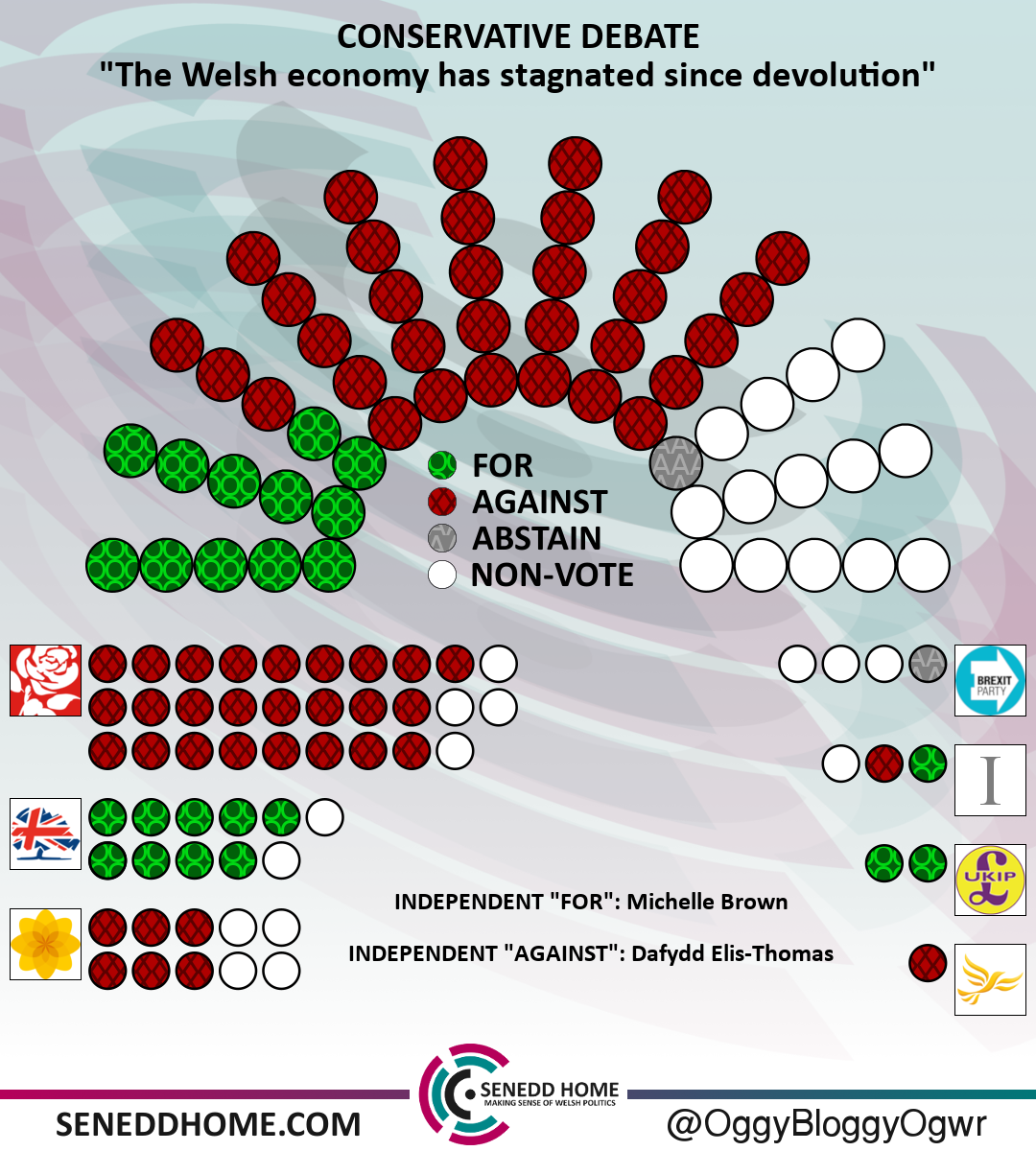