Delyth Jewell AM (Plaid, South Wales East) said an unambiguous clarity on the way forward on Brexit was needed as policies of the Westminster parties have been confused. The hardships people faced when considering voting Leave in 2016 were down to the UK Government, who were negligent towards disadvantaged communities on the one hand and targeted vulnerable people with cruel policies on the other hand.

Suggesting that a second vote would be undemocratic was contradictory “newspeak”.

“Those who advocated leaving the EU have had one opportunity after another to deliver on the result, but when it came to the crunch, they had nothing to bring to the table except empty rhetoric, so they resigned instead. They’ve had their chance and they’ve failed, leaving us with no choice but to revisit the original decision, but this time knowing what’s at stake….”
– Delyth Jewell AM

Llyr Gruffydd AM (Plaid, North Wales) argued that there were multiple versions of Brexit:

Helen Mary Jones AM (Plaid, Mid & West Wales) thought there was a plan too and she was prepared to accept the result, but there’s no consensus on the way forward and many people will have changed their minds.

Carwyn Jones AM (Lab, Bridgend) echoed that, adding that Brexit has become such an all-consuming matter it dominates everything to the point that nothing gets done, with the UK Parliament near paralysed as British industry faces another crisis.

Lynne Neagle AM (Lab, Torfaen) said her party had failed to grasp the nettle “on the most important issue of our times” and left the door open to “opportunists, zealots and charlatans”. She welcomed the First Minister’s newfound commitment to a second referendum. Alun Davies AM (Lab, Blaenau Gwent) later said consent has to be informed consent as evidence mounts that people were lied to and manipulated by the Leave campaign.

The people have spoken

Mark Reckless AM (BXP, South Wales East) accused Plaid Cymru of ignoring the views of the people and thinking they know best. The white paper they agreed with the Welsh Government made no reference to a second referendum. He called on whoever succeeds Theresa May as Prime Minister to leave the EU on October 31st 2019 as planned – deal or no deal.

“Although legally the referendum was non-binding, the Government to implement the result. The fiasco that followed showed that our politicians’ words are of no real value. Brexiteers are being blamed for the division that now clearly exists in the UK population, but it is the Remainers’ non-acceptance of the referendum that has caused the divide….”
– David Rowlands AM (BXP, South Wales East)

Shadow Brexit Minister, Darren Millar AM (Con, Clwyd West), pointed out this wasn’t the first debate from Plaid calling for a second referendum. The good performance of the Brexit Party at the European elections should send a clear message as to what people want to see happen.

Striking a more neutral tone, Hefin David AM (Lab, Caerphilly), said that while Remain was still a better option, you can’t assume that Leave voters are “wrong”. Democracy in the UK was fundamentally broken and putting the decision back to the people again could entrench divisions in society – as a result he’s a convert to proportional representation.

“….the point I’m making is our democracy is not functioning. The only way through right now, reluctantly, is a referendum. But we need to look at this. We need to think about how we can repair our democracy. There is a way forward, and that way forward is reforming our electoral system.”
– Hefin David AM

Prepare for a referendum now

Counsel General and Brexit Minister, Jeremy Miles (Lab, Neath), said that while the Welsh Government, working with Plaid Cymru, provided a detailed blueprint of Brexit going forward, the UK Government has wasted three years and the Conservates will waste more time on a leadership election.

“So, we are making clear now that we will campaign to Remain and we need parliamentarians of all parties to recognise the only way forward is to legislate for another referendum. The UK Government should be taking the necessary steps to prepare for another referendum, drafting the relevant legislation, consulting the Electoral Commission and seeking agreement to another extension to the Article 50 process.”
– Counsel General and Brexit Minister, Jeremy Miles 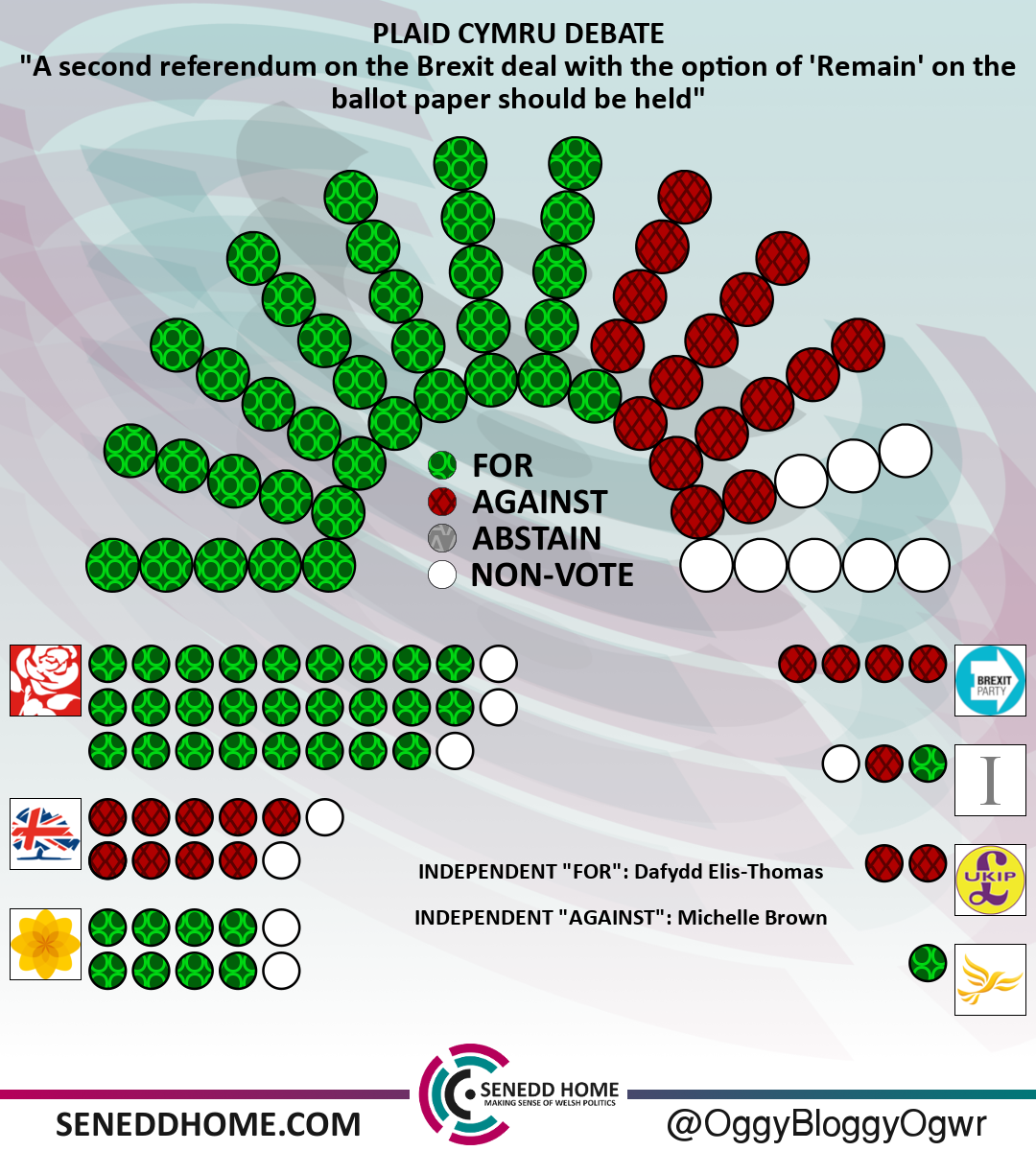