John Griffiths AM (Lab, Newport East) summarised many of the well-known problems facing people in poverty across educational achievement, life opportunities and housing. He highlighted criticisms of the Welsh Government’s prosperity strategy, as well as academic findings that welfare reform was one of the main drivers on an increase in poverty.

“Despite this alarming picture….the Welsh Government does not currently have an overarching poverty strategy as it did in previous years, and greater leadership is required. The most commonly used measure of poverty is the proportion of the population who live in a household whose income is less than 60% of median income, adjusted ….after housing costs. However, we still do not have a definitive definition of what poverty means that can be used by Government departments, local authorities and private and voluntary sector organisations.”
– John Griffiths AM

Shadow Communities Minister, Mark Isherwood AM (Con, North Wales), endorsed the general need for leadership but pointed to various statistics and reports which showed falls in absolute poverty and improvements to peoples’ sense of well-being.

Leanne Wood AM (Plaid, Rhondda) certainly wasn’t going to look on the bright side, saying Westminster’s policies “were killing people”. She wanted to see the people most affected by poverty being more involved in developing the policies to help them. Leanne also repeated calls for administration of welfare to be devolved.

Lynne Neagle AM (Lab, Torfaen) lamented the Welsh Government’s decision to drop a target to eliminate child poverty by 2020, but successive UK governments had made it impossible to achieve:

“The result is that, for a decade now, child poverty figures in Wales have stagnated….started to rise – an unparalleled failure of our economic model in the UK, the unjustifiable price of austerity, a trap for future generations. The most brutal truth of the Conservative record is….avoidable deaths associated with poverty….have risen through the age of austerity.”
– Lynne Neagle AM

Mike Hedges AM (Lab, Swansea East) noted the rise of in-work poverty and the number of people having to work multiple jobs to make ends meet. The roll-out of universal credit has reduced family incomes and the Welsh Government needed to do more to ensure employers receiving government support didn’t exploit their workers.

“….the Government needs to review its early intervention strategies and plans such as Flying Start. 44% of children living in poverty don’t qualify for Flying Start and we need to move the focus back to the creation of a national and local strategy in terms of early intervention.”
– Sian Gwenllian AM (Plaid, Arfon)

Rhianon Passmore AM (Lab, Islwyn) repeated words from a UN report which said the post-war consensus has been deliberately removed and replaced with “a harsh and uncaring ethos”. Jenny Rathbone AM (Lab, Cardiff Central) believed the free school meal system needed a review due to low take-up and complicated eligibility criteria caused by universal credit, while Huw Irranca-Davies AM (Lab, Ogmore) called for every local authority to designate a member responsible for eliminating food poverty.

“The bread and butter things”

Economy & Transport Minister, Ken Skates (Lab, Clwyd South), said the elimination of poverty was one of the reasons he entered politics. The Welsh Government’s approach to policy was, in his words, “focused on the bread and butter things” by providing universal benefits like free prescriptions.

A reminder that the vote is non-binding; all government AMs present in the chamber abstained. 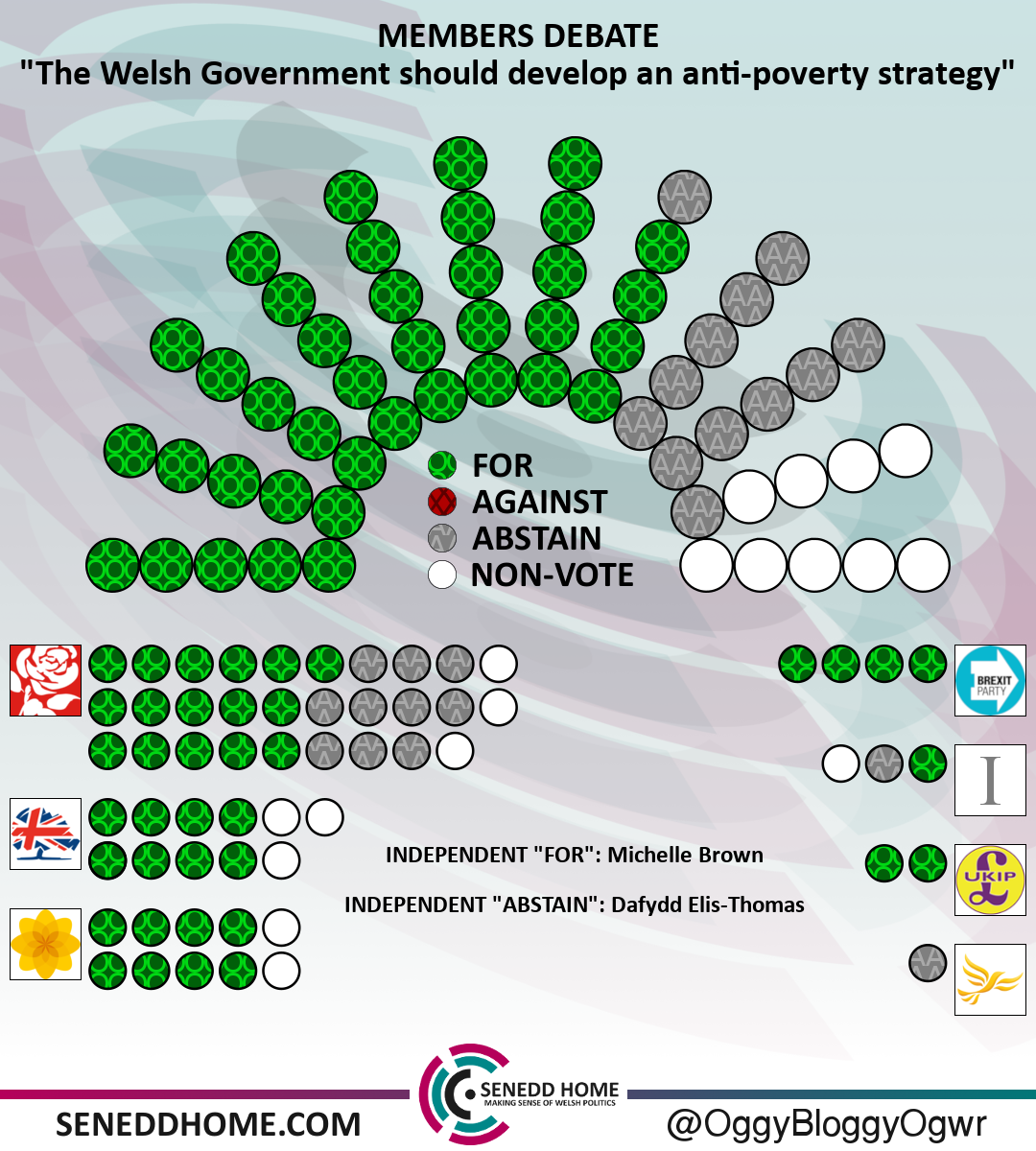