It seems plastic waste has been a high priority this week, with this Conservative sponsored debate taking place not long after the Environment Committee’s report. Hefin David AM (Lab, Caerphilly) also held a short debate on this earlier this year.

A duty to act

Shadow Environment & Rural Affairs Minister, Andrew RT Davies AM (Con, South Wales Central) said politicians now had a duty to act on plastic waste given the heightened public opinion against unnecessary plastic use. He said the word “ban” sends shivers down his spine, but we were reaching a tipping point.

Wales had to be more ambitious and despite being ahead of most of the world on recycling, we were behind on plastic waste – with evidence on a recent TV documentary that plastic waste from Rhondda Cynon Taf was being dumped in Malaysia.

Dr Dai Lloyd AM (Plaid, South Wales West) said plastic pollution was one of the planet’s greatest challenges. The recent Environment Committee report raised the issue of microplastics, which were everywhere and a potential challenge to not only wildlife but for human health too.

“I think the Government is sending the right signals, but….think you need to get a move on….I was pleased that a significant number of Members attended the event that I sponsored earlier this year when a deposit-return scheme machine was brought into the Senedd, and we all had a chance to see it in action. I think we were very impressed by how practical and effective it was….”
– David Melding AM (Con, South Wales Central)

David Rowlands AM (BXP, South Wales East) also raised the matter of little to no progress on deposit-return. Why was Wales able to introduce a charge on single-use plastic bags so quickly, but it’s taking so long to do this? Mandy Jones AM (BXP, North Wales) criticised the inconsiderate behaviour of people who litter on the expectation that other people will clean it up.

Janet Finch-Saunders AM (Con, Aberconwy) said that while plastic waste was a global worry, the local effects were just as bad – citing the amount of plastic picked up from beaches in her constituency. It was also worrying that recycling rates have stalled or have even started to fall in some parts of the country.

“I do think more emphasis should be placed on the manufacturers and producers that use plastic to stop doing so. Why should the public or local authorities – funded by public money – pay for the processing of waste that is produced purely and simply to help producers sell their products?”
– Michelle Brown AM (Ind, North Wales)

No room for complacency

Deputy Environment Minister, Hannah Blythyn (Lab, Delyn),  said while Wales has a decent record, the calls from young people, in particular, to deal with the plastic problem meant there was no room for complacency. £6.5million of a circular economy fund will be focused on plastic recycling.

“We’ve all heard about the UK Government plans to ban plastic straws, stirrers and cotton buds in England. I can tell Members that here in Wales we are committed to restricting or banning the availability of these products in line with the EU’s single-use plastics directive…. So, we will work with stakeholders and consult on our proposals for restrictions on plastic straws, stirrers and cotton buds and on a wider range of items such as balloon sticks, cutlery, plates and polystyrene food and drink containers.”
– Deputy Environment Minister, Hannah Blythyn

A joint Welsh-UK government consultation on a deposit-return scheme has been launched, though it was important to consider how it would fit with current household recycling.

Despite their amendments being accepted and speaking largely in favour of pretty much all that was said, Plaid voted against. I don’t know why. I somehow doubt that they suddenly hate turtles and dolphins and these things usueally come down to the precise wording of the amended motion, plus they would probably prefer Wales-only deposit-return schemes and restrictions/bans. 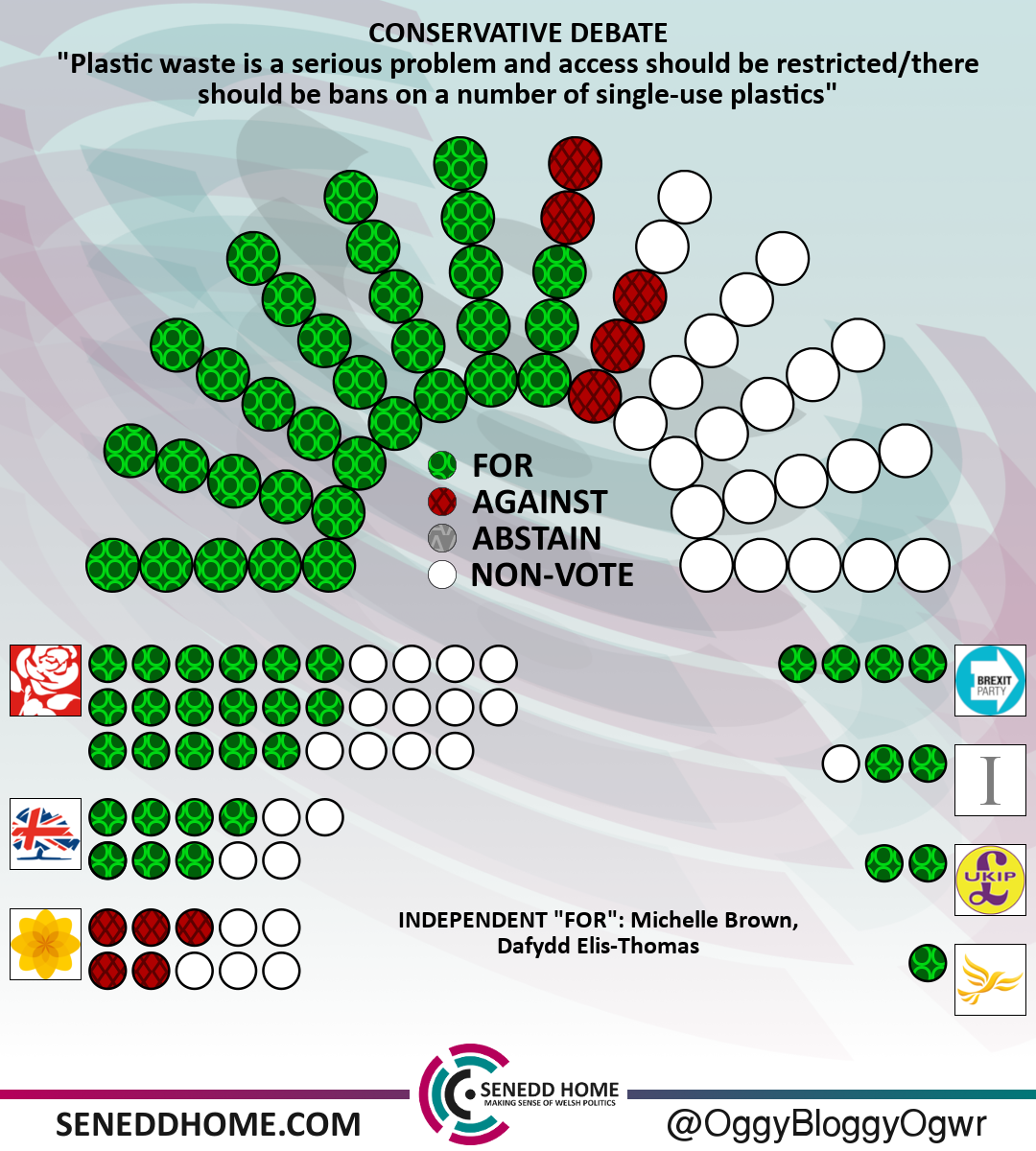