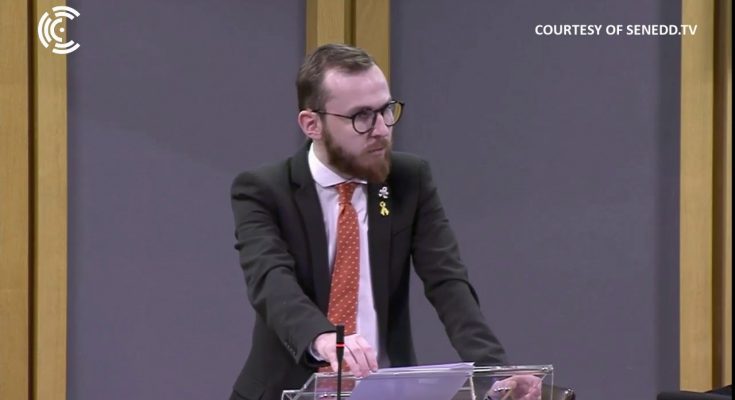 This week, it was the turn of Jack Sargeant AM (Lab, Alyn & Deeside) to lead a short debate.

“Empathy must be central to what we do”

Jack Sargeant said that despite many references to kinder politics in the Senedd chamber, it was time to turn words into action. Life isn’t a level playing field and empathy had to be central to what politicians do – seeing the world through the eyes of different people.

“We’ve seen a growing sense of isolation, dislocation, insecurity and the erosion of hope, the growth of unkind communities. So, to deal with these issues, we can either beat the fire with fire, using unkind solutions for unkind situations, which will only lead to a greater environment of blame and pain, or we can acknowledge the problems we have and seek to fix them with new solutions, kinder solutions.”
– Jack Sargeant AM

He’s been working with the Carnegie Trust on innovative new ways to promote kindness and wellbeing in everyday life. They found that, in Wales, when people experience kindness, they’re more likely to act the same way towards other people. Some may say that kindness may not work as a political strategy, but they’re wrong. Considering the number of challenges we face, stepping back to think might be the best option.

Darren Millar AM (Con, Clwyd West) read the work of the Carnegie Trust and was pleased that Wales was a kinder place than people think. Politicians don’t always get it right and sometimes have to disagree, but there was increased vilification of people with different political and religious beliefs.

Deputy Minister without portfolio, Jane Hutt (Lab, Vale of Glamorgan), believes Wales can and should be a place where we reject all forms of bigotry and prejudice. The Welsh Government is working to build bridges between different communities and has the ambition of becoming a “Nation of Sanctuary”.

While there had long been government support for measures on hate crime and involving the third sector, there were emerging issues which needed addressing such as online bullying and the tone of political debate.

“All politicians have a responsibility to line up to the values and principles that Jack Sargeant has raised today and on many occasions. But I think, finally, I’d say that Jack’s challenge is what he said to the powerful in our society. We have a responsibility, all of us, to speak up. Some of us have the power. We all have powers in our own way, as an agency, but those who have responsibility, as leaders, have got to take that power forward.”
– Deputy Minister without portfolio, Jane Hutt