There was mainly good news and some bad news in the latest round of OECD PISA test results – which were taken by 15-year-olds in 2018.

The tests are the gold standard by which education systems are compared nation-to-nation, having become something of a political football in Welsh politics over the last decade due to falling scores compared to the rest of the UK and some of the world’s major economies. Here’s my previous commentary on the 2012 and 2015 results.

The tests examine the practical application of knowledge gained in the classroom in reading, mathematics and science. 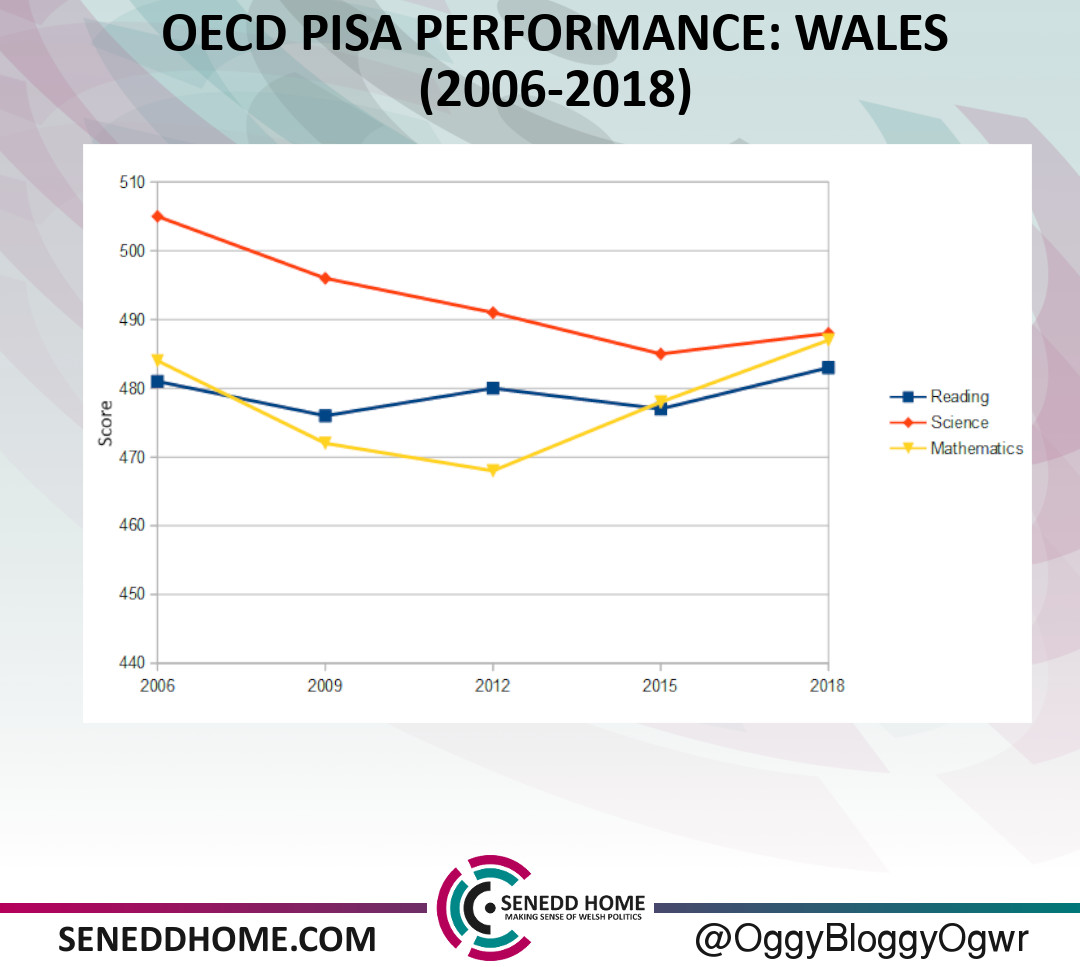 Welsh students achieved their best scores in mathematics and reading since Wales began participating in PISA in 2006. While science scores are way down on where they use to be, there’s still been an improvement. Wales’ scores have improved faster than the OECD average, building upon 2015’s turnaround. Everything’s heading in the right direction for once.

The gap with the rest of the UK has closed a little bit and Wales has caught up with Scotland and Northern Ireland on mathematics and science to the point where there’s little difference.

Of the 79 nations and regions taking part in the test, Wales would be ranked around 29th in reading (similar to Switzerland and The Netherlands), 31st for mathematics (similar to Italy and Luxembourg and ahead of the United States) and 29th in science (similar to Norway and Austria).

Across the board, Wales’ performance is near enough identical to the international average.

The gap in performance between the least deprived and most deprived students in Wales was also said to be low, meaning students from disadvantaged backgrounds are more able to overcome those disadvantages. Girls have closed the gap with boys in mathematics.

Being bang average is probably a good thing considering Wales’ performance since 2009, but it’s still what it is – not great, not terrible. There’s room for improvement.

In 2017, the target for Wales to achieve a 500-point average across all three subjects by 2021 was dropped. Despite the improvement in 2018 it’s likely that, at the current pace of developments, the target would’ve been missed – though not by much.

We also have some way to go to completely close the gap with the rest of the UK. The UK as a whole is ranked 14th of the 79 nations and regions taking part, driven mainly by the performance of English students, who out-performed Wales across the board. Wales also continues to lag behind Scotland and Northern Ireland in reading.

44% of Welsh students said they rarely or never read books, despite believing themselves to be more confident than the OECD average in being able to understand difficult texts (suggesting a big shift to digital reading).