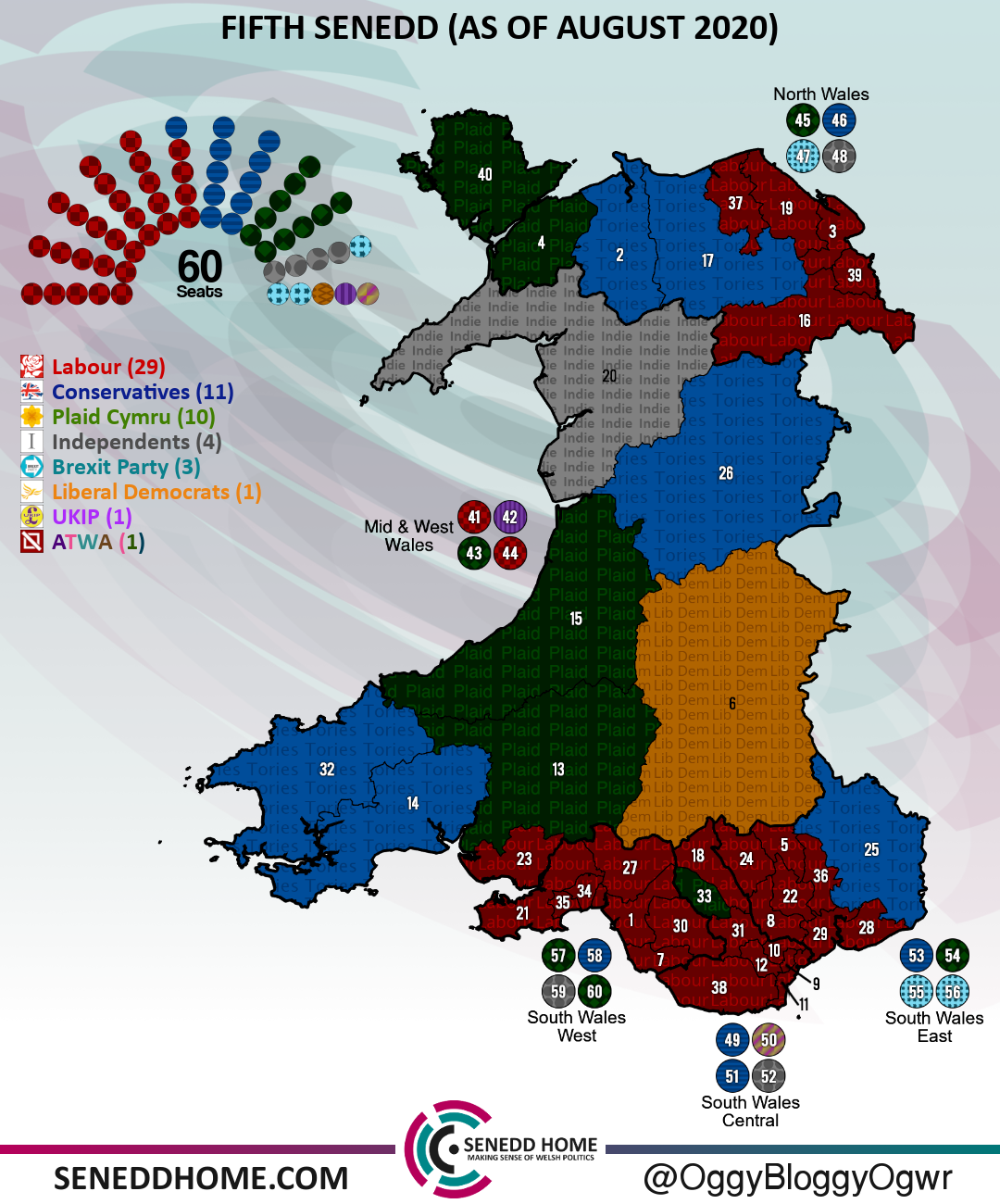 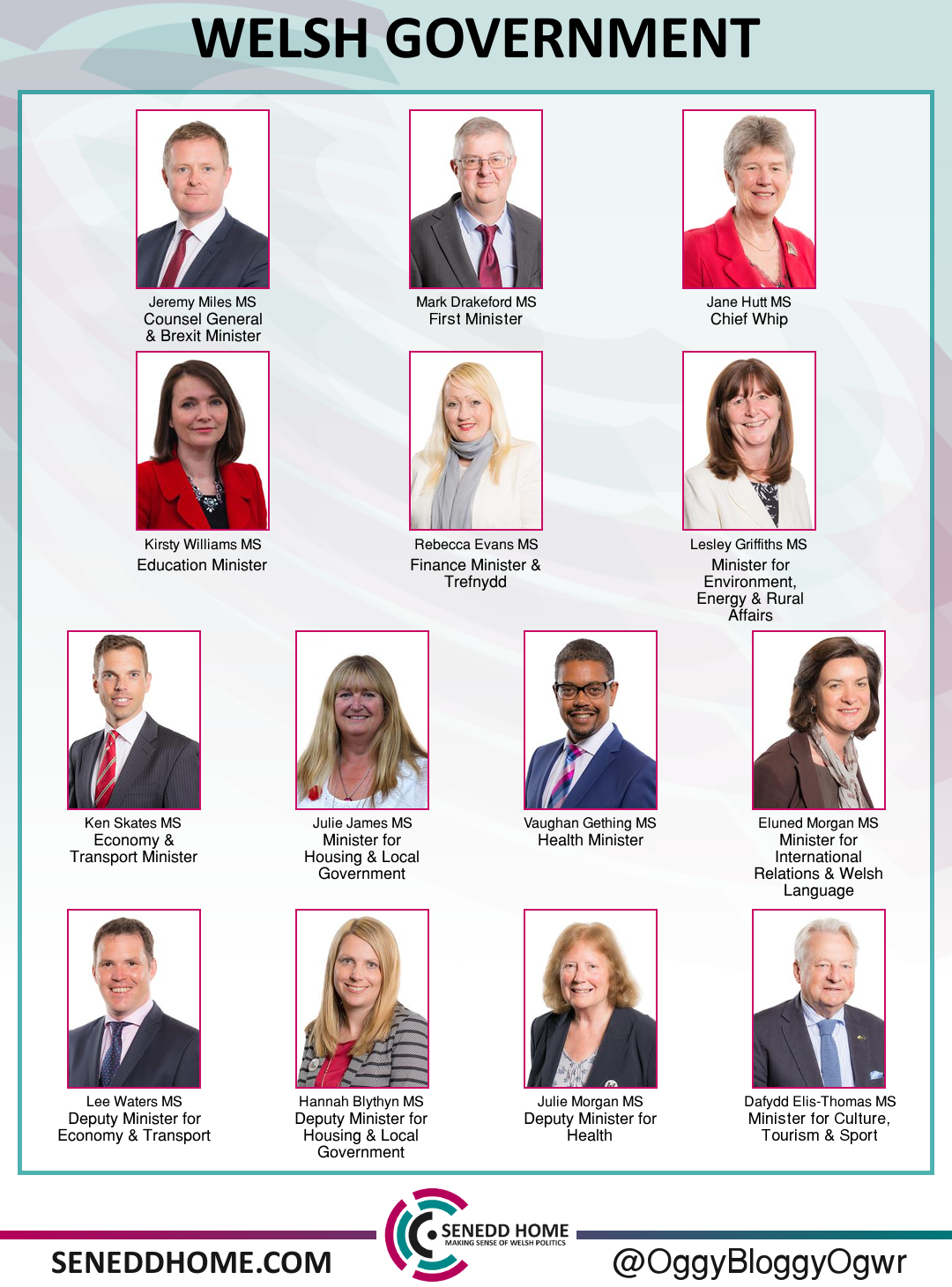 Parties are ordered by size of the group and MS are in alphabetical order by constituency or region.

Labour has dominated Welsh politics since the 1920s and have formed a government every year since the Senedd was established in 1999. With that comes criticism over the chronic underperformance of Welsh public services – particularly the NHS – but this hasn’t dealt a fatal blow to them yet, with Welsh Labour’s brand of paternalistic social democracy being dull and practical enough to hold off a threat from a divided opposition. After a long internal battle, the party have come around to supporting devolution (and extra powers for the Senedd) but oppose Welsh independence.

+ Elected via a by-election on February 6th 2018 following the death of Carl Sargeant on November 7th 2017.

The Conservatives in Wales have traditionally represented the English-speaking landed class and business interests, so it’s no surprise that a significant proportion of their MSs since 1999 have a farming background. Their support has gradually grown over the years following their tentative and pragmatic embrace of devolution under Nick Bourne – having initially campaigned against it. However, in heart and mind, the party are British nationalists whose senior elected representatives are perhaps more enthusiastic about devolution than their grassroots members.

Plaid Cymru’s support base lies mostly in Welsh-speaking rural areas, but since a big policy shift in the 1970s they’ve positioned themselves on the radical left, attempting to occupy space vacated by the (old) Liberal party and hold the Greens at arms length. They’ve struggled to make a significant breakthrough, attempting to mix democratic socialism and cultural conservatism with (until 2019) lukewarm support for Welsh independence – which has since entered mainstream discussion due to the efforts of Yes Cymru and affiliated organisations. In September 2018, they elected Adam Price as leader, ending Leanne Wood’s six years in charge.

The Brexit Party was founded in January 2019 by former UKIP leader, Nigel Farage – in part because of the shift by UKIP towards the far-right and with an eye on the 2019 European Parliament elections. The populist party/limited company appeals to voters who voted Leave in the 2016 EU membership referendum by promising a “No Deal Brexit”, despite having few other formal policies beyond that. On May 15th 2019, several former UKIP MSs announced they were to form a Brexit Party group in the Senedd.  The leader in the Senedd, Mark Reckless, has endorsed a policy which would see the Senedd abolished and replaced with sitting MPs and a directly-elected First Minister/Mayor.

As of February 2020, the Brexit Party has been placed behind and indefinite “cordon sanitaire” on Senedd Home – explained here in more detail.

Independents are not members of any party group. Independent MSs have been elected in the past but it’s a rare occurance. It’s far more likely for a MS to become an Independent following a dispute with their former party – or having been on the receiving end of a disciplinary procedure – than for political reasons.

Formed prior to the 2016 Senedd election by disgruntled former UKIP members, the party has a sole aim – to return Wales to direct rule from London. Around 20% of people in Wales support direct rule – similar numbers to those who support Welsh independence.  As of November 2019, Gareth Bennett remains behind an indefinite “cordon sanitaire” on Senedd Home – explained here in more detail.

It’s rare a party can say they’ve achieved their main goal, but UKIP did that with the successful “Leave” vote in the 2016 EU Referendum. Due to the lack of an intellectual base, they’ve been unable to set out a coherent policy vision beyond a populist anti-immigration and anti-foreigner platform. In August 2018, the party re-adopted its policy to abolish the Senedd and return Wales to direct rule from London.  They’re no longer an official party group in the Senedd, having been reduced from an original group of seven MSs elected in 2016 to just one.

UKIP/Neil Hamilton has been placed behind an indefinite “cordon sanitaire” on Senedd Home – explained here in more detail.

For most of the 19th and early 20th Century, the Liberals were the dominant force in Welsh politics. Following an ill-fated five-year coalition with the Conservatives at UK level between 2010-2015, the party’s influence has receded at an extraordinary rate; as of 2017 the party have no MPs in Wales and lost 4 MS in the 2016 Welsh General Election. Their position as a centrist, pro-EU party leans their support towards federalism, but they remain against Welsh independence.