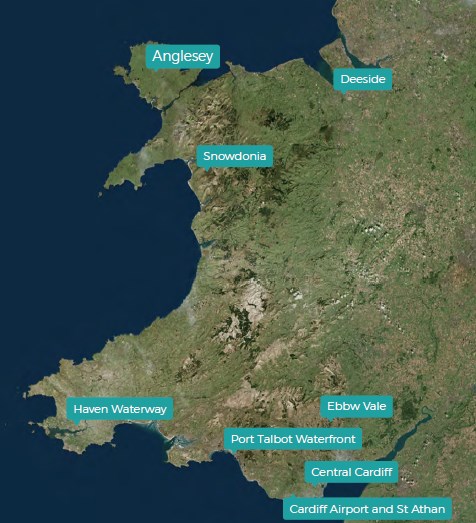 “Enterprise Zones have been a series of place-based experiments and will continue to merit further study as they continue over the coming years. The clear lessons –that there are real benefits to knowing your strengths and bringing together around a shared vision –are valuable in the new regional approach to economic development the Welsh Government is developing.”

1. Performance of the Welsh enterprise zones has been “mixed”

There are eight enterprise zones located around Wales. When the programme started in 2011 there were five, with Snowdonia and Milford Haven added in 2012 and Port Talbot added during the height of the steel crisis in 2016. The goal is, essentially, to create jobs and improve the attractiveness of the zones for further investment.

The total number of jobs created, saved or safeguarded has been 10,707 off the back of £221.1million worth of investment, working out on average as £20,655-per-job.

2. Businesses aren’t entirely interested in the incentives on offer

The Chair of the Port Talbot enterprise zone told the Committee that the incentives weren’t what attracted or enhanced businesses within the zone. What attracted and kept them was what was already on offer in terms of local skills, infrastructure, access to markets. Another Chair described the support on offer as “lightweight”.

3. Lack of business/industrial properties was a major concern

There’s a shortage of suitable units in many enterprise zones – “nothing” available on Anglesey – and a lack of modern floor/office space across all of Wales. There’s very little speculative development of industrial/business property outside central Cardiff.

Even in the south Wales Valleys, industrial properties are often at 95-98% occupancy. While this could be construed as “good news” it prevents the growth and expansion of existing businesses and makes it harder to attract inward investment.

The Chair of the Milford Haven enterprise zone described the lack of properties outside Cardiff as “a market failure”, particularly within the small and medium-sized business category. He said that if 500-600 starter units were built across south Wales the market wouldn’t be surprised.

The Committee recommended the Welsh Government look strategically at the availability of commercial and industrial properties and ensure local councils have the money to develop them where applicable.

4. Merging enterprise zones should be reconsidered

The Welsh Government are actively considering merging the Anglesey and Snowdonia enterprise zones. The Anglesey zone has been relatively successful compared to the others and if/when a definitive decision is made on the Wylfa Newydd nuclear power station it could boost the work further.

Snowdonia, on the other hand, has been less successful. While the Committee understands the appeal of a merger as both zones are involved in nuclear energy, they believe the board of the Angelsey zone has shown such commitment and focus it should be allowed to continue on its own at least until there’s a decision on Wylfa one way or another.