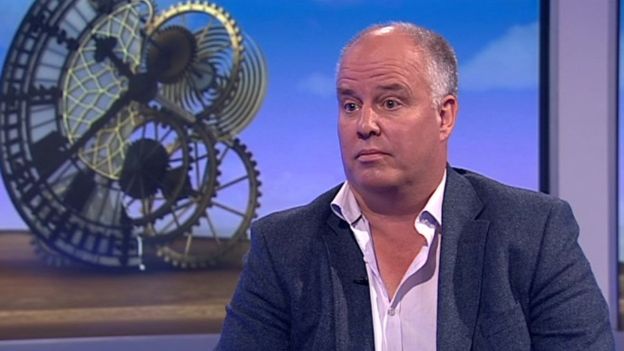 (Title Image: BBC Wales)
* Note – This was written before this morning’s announcement.

Tidal Lagoon aside, the other main talking point of the week is without a shadow of a doubt Airbus’ “threat” or “assessment” – depending on how you look at it – on its future in the UK in the event of a no-deal Brexit (where the UK reverts to World Trade Organisation rules and tariffs are imposed on goods and services traded between the UK and EU).

Airbus employs around 7,000 people across its wing-making plant at Broughton in Flintshire and EADS cyber-security centre in Newport, while the extensive supply chain and cross-border workforce at plants based in England (like Filton) make the company a significant player in the Welsh, UK and global aircraft industry.

There’s no point going over the announcement itself because it’s been well-summarised elsewhere, though you can read Airbus’s assessment for yourself here (pdf).

First of all, amidst the excitement, it’s worth saying it’s a “worst case scenario”.

It’s unlikely Airbus will shut up shop after Brexit – soft, hard or no-deal. The company won’t have invested so much time and effort in building up a highly-skilled workforce its entire plane-making business is reliant on (it’s pretty hard to fly a plane without wings) only to decamp elsewhere in a process that would cost them hundreds of millions of euros.

However, when it comes to making investment decisions in the future – maybe in the mid-to-late-2020s when new products and product lines are considered – that’s when Airbus may decide to give the UK a wide berth if too many barriers to trade have been placed between the UK and the EU. The same goes for other major companies with a branch factory in Wales like Ford, GE, Toyota, Tata etc.

This worst-case scenario could be avoided in the UK and EU reach some sort of trade agreement that benefits manufacturing, or there’s a “softer Brexit” where the UK stays either in the single market or the customs union.

I kept the EU referendum leaflets because I thought they would come in handy one day. Looking over them again underlines not only how crap the Remain campaign was, but also the lack of what we might consider reasoned economic discussion; Vote Leave concentrated on immigration, the £350million a week and sovereignty – though there was this pearl: 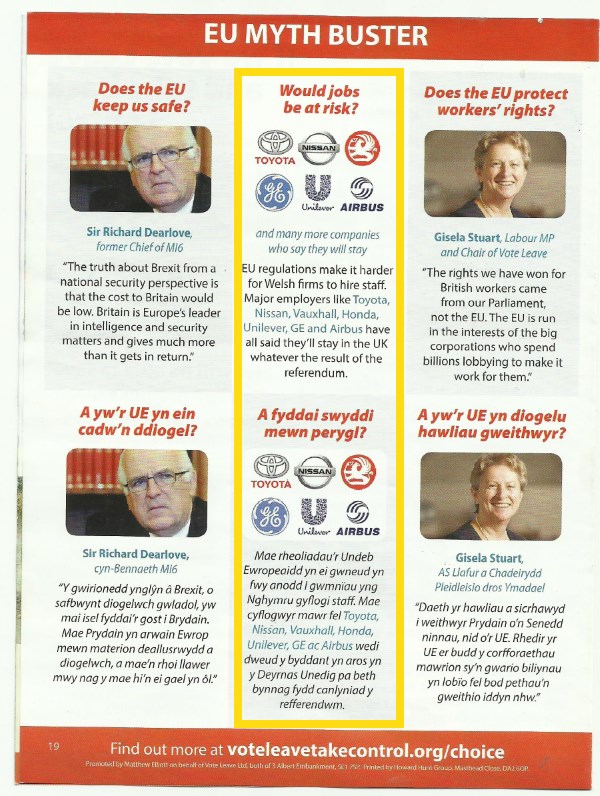 In some respects they were telling the truth. Airbus warned employees about future investment before the referendum but said they “wouldn’t cease….activities in the UK” – though that might’ve been based on the assumption there would be some sort of deal, or was the result of a complacent assumption that Remain would win and they wouldn’t have to think about it. Well, now they do.

The (soon to be former) Leader of the Opposition, Andrew RT Davies AM (Con, South Wales Central) – who announced his resignation as Welsh Conservative leader this morning – has come under fire for his characteristically blunt dismissal of Airbus’ assessment – but at least he’s consistent and he also accepts there may be trade barriers after Brexit (in his rebuttal he says “as free and frictionless trade as possible” not “free and frictionless trade”).

Another area Andrew has been consistent in is his failure both inside and outside the Senedd chamber to name one single tangible benefit of Brexit; vague ones about tailor-made farming policies certainly, but he’s never said what those policies should be.

He doesn’t have to justify his thinking because all those on the winning side “know” Brexit will work. A Tory criticising business is a lot like Plaid criticising Wales, the SNP criticising Scotland or Labour criticising trade unions – which demonstrates just how much of a leap of faith Brexit has been, and why it’s existing separately from reason. Andrew is going to die on that hill and knows it’s worth it – end of.

Lexit and pro-Leave Welsh nationalists aside, Brexit was won by romantic Anglo-British nationalism tied to arguments over sovereignty, not economics or the needs of distant, foreign-owned companies. It’s a bulldog on the cliffs of Dover, self-belief and “taking back control”….and I can understand where they’re coming from and why it’s going to be very difficult to get Andrew and others like him to start taking this a bit more seriously.

To underpin my point, let’s change the scenario. Let’s assume Wales had, in some alternate timeline, voted for independence in 2016 by a similar margin to Brexit.

The burden of proof that it would benefit Wales economically should lie on the winners – those of us who support independence/the Yes campaign. We would be getting it in the neck from Andrew and others if those plans weren’t watertight, would be proven to leave Wales materially worse off or if any “divorce deal” with England wasn’t progressing particularly well.

Supporters like myself would no doubt point to “Project Fear” and will have come up with a nickname to dismiss “their” arguments – “Brit Gnats” or something – as we roll our eyes with each doom-laden headline and press release. None of it will matter; the people have spoken.

Andrew could be pointing to every single setback as a reason to abandon independence. He could be wheeling out big businesses and getting anonymous briefings from inside major state-run departments, throwing facts and figures at us, to inform us all how awful it would be and how many jobs would be lost. He might even, in such circumstances, lead calls for a second referendum to either confirm or reverse the decision.

Would he be wrong in doing so, or just trying to appeal to reason in an argument that’s already been won by faith?

A blind faith in Brexit and Britain may be why Leavers won, but it also hands them a problem. In future campaigns like this, it won’t be a case of who’s got the strongest argument, but who’s willing to die on a hill based on a leap of faith.

One day Andrew and other mainstream right/Anglo-British Leavers might find themselves on “the other side”. We’ll all be looking back on what they’ve said and done over the last few years – however improbable it may seem now – and use that against them in a manner which could, in the end, permanently take away something that’s important to them.