Plaid Cymru leader, Adam Price AM (Plaid, Carms. E & Dinefwr), believes Brexit is becoming a “self-inflicted calamity”, caused by an exercise in democracy in which promises were made by politicians – on both sides – which were undeliverable.

“We’ve been witnessing, haven’t we, a car crash in slow motion? Well, it’s speeding up now and….the first imperative in a democracy is to be honest with the people….They were lied to, and they deserve the opportunity—now that they have the truth unveiled – to decide what they want to happen next.”
– Adam Price AM

He warned that trade deals would take much longer to do than expected, the UK would have to negotiate up to 50 separate deals at the same time, it would affect the ability for the UK to import radiological treatments for cancer (by leaving Euratom) and research has shown Brexit is costing the UK £500million a week.

Later on, Leanne Wood AM (Plaid, Rhondda) said the Brexit vote was at least partly the result of a yearning for a time when people weren’t so reliant on handouts and public money wasn’t spent on projects around them with little benefit to themselves.

“If we have a people’s vote on the final deal, then we need to learn the lessons of the 2016 referendum and address the underlying causes that led to the Brexit vote: poverty, disillusionment with our political system, and the despair felt by many of our communities. A people’s vote needs to be an exercise in further democracy, not seen as an attempt to overturn a democratic decision.”
– Leanne Wood AM

Leader of the Opposition, Paul Davies AM (Con, Preseli Pembs.) respectfully disagreed. Wales needs to embrace the opportunities of Brexit.

“I’m pleased the Welsh Government has launched the Business Wales Brexit portal—a website specifically designed to help businesses prepare for the changes and challenges….Similarly, for Welsh farmers, leaving the EU also presents opportunities to put in place bespoke Welsh policies that can better reflect the changing nature of the industry and help support Welsh farmers for the future.”
– Leader of the Opposition, Paul Davies AM

He accepted a number of “outstanding issues”, particularly Northern Ireland, but was confident they’ll be resolved. A second vote would only act as a “distraction” to the hard work that needs to take place after Brexit.

Other AMs were more combative.

“Today’s debate is certainly not about the people, it’s about politicians saying, ‘We know best’, ignoring the instructions given to us by the people. You’ve had your instructions: it was ‘leave’. Where does this end?”
– Mandy Jones AM (Ind, North Wales)

Helen Mary Jones AM (Plaid, Mid & West Wales) raised the point that younger people are increasingly angry over Brexit and, even if they wouldn’t all vote Remain, are victims of her generation’s gamble with their futures.

Lynne Neagle AM (Lab, Torfaen) pointed to three facts: Wales voted Leave; the promises in 2016 will never be delivered; there’s no majority support for a single Brexit plan at Westminster. The way out is for parties to co-operate, but there’s no chance of a fresh UK election happening and supported a “People’s Vote”.

Jenny Rathbone AM (Lab, Cardiff Central) raised the possibility of civil unrest next year as “passions are running so high” and “crashing out of the European Union is something nearly everybody in this Chamber would be appalled by”. We, therefore, have to prepare for the possibility of a second referendum.

“Now, I think Labour’s demand for a UK general election is for the birds, because the Conservative Party is never going to vote for a general election before 2022, and therefore this people’s vote….is actually the only way out of absolute political deadlock, which we have never seen in our lifetime.”
– Jenny Rathbone AM

When push came to shove, neither Jenny or Lynne voted for the “People’s Vote”.

Mick Antoniw AM (Lab, Pontypridd) thought there would be a new election because there’s no prospect of a referendum before March 2019 as it would require legislation that wouldn’t be passed in time.

“Do not play with people’s lives”

The First Minister was cautious about overturning a referendum on the drop of the hat because it’s a similar tactic used by devolution’s opponents. He didn’t think there could be another referendum with the same question as in 2016. People voted for an idea and weren’t given a clear plan of what would happen afterwards – unlike 1997 and 2011.

“With the stakes so high, I can’t see what objection anybody would surely have that, if the political process fails, if Parliament can’t agree, if there’s an election and there’s an inconclusive result, the people are asked the question, ‘What do you now think? You know what the circumstances are, you know what the stakes are—what do you want to do?’ And that’s democracy.”
– First Minister, Carwyn Jones

Most of the First Minister’s argument was framed around Northern Ireland – currently one of the major stumbling blocks in Brexit negotiations – and his personal experiences of conflict and peace (his wife’s from Ulster). He told AMs the Good Friday Agreement ended 300 years of conflict, not just The Troubles, and the EU played a huge role: “We play around with that peace deal agreement at our peril”. 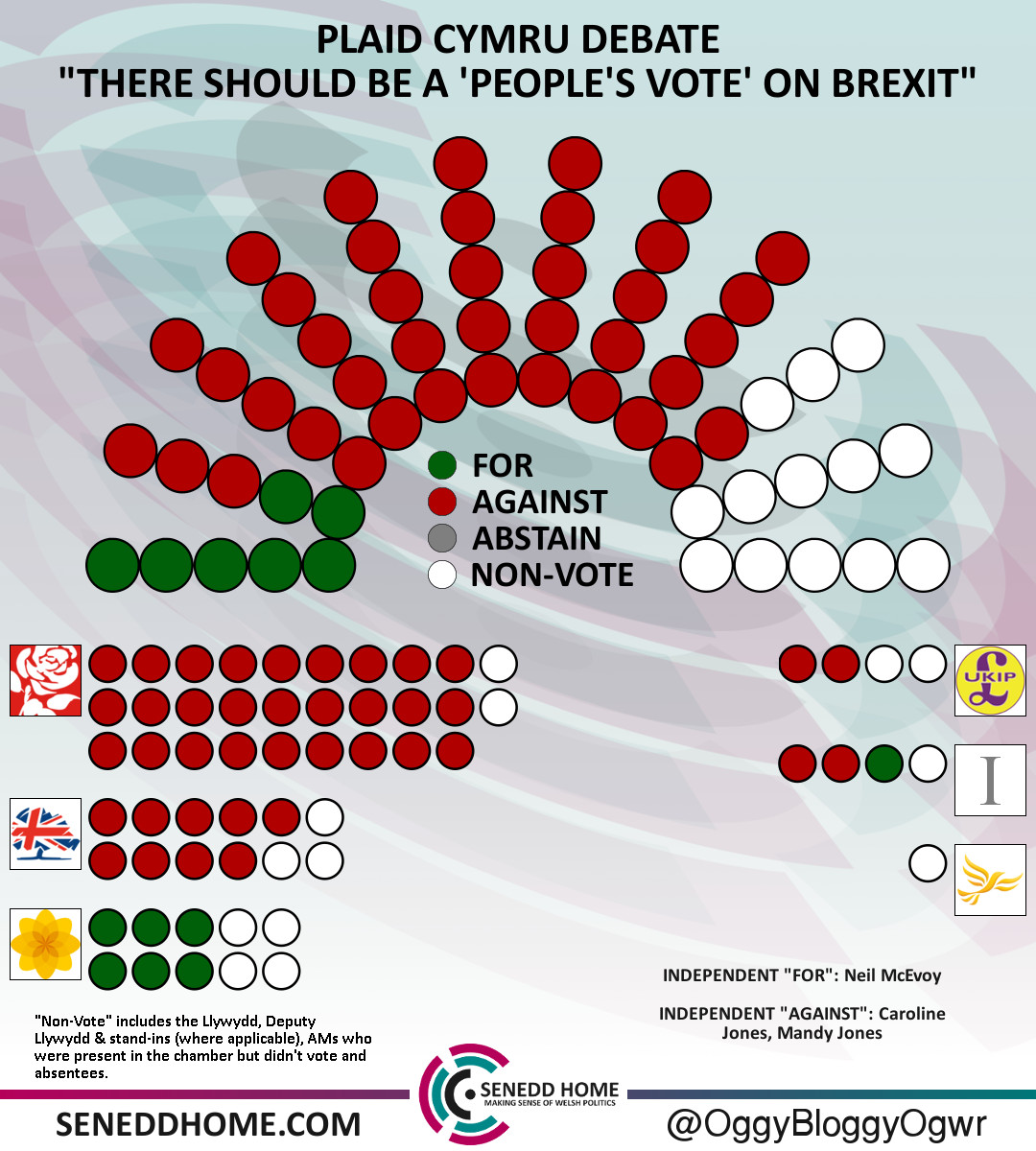 A Government-backed amendment – saying a “People’s Vote” should be kept on the table if the Prime Minister can’t negotiate a deal and no UK general election were subsequently held – was approved by 28 votes to 18.