Yesterday, a vote took place on whether to repeal the Law Derived from the European Union Act 2018 (aka. Continuity Bill), which – in effect – enshrined all current EU laws in devolved areas into Welsh law.

Following an agreement between the Welsh and UK governments over post-Brexit powers, the Welsh Government agreed to repeal the Act. The UK Supreme Court is due to rule on a nearly identical Scottish law soon.

“The Act has done its job, it’s time to move on”

One of the biggest arguments in favour of the Bill was that it would prevent a “power grab” by the UK Government in which they would have the ability to make laws in devolved areas as and when they liked.

The Finance Secretary, Mark Drakeford (Lab, Cardiff West) was convinced that the inter-governmental agreement meant this wasn’t the case and that areas already devolved remained devolved. Although a vote on repealing the Act has been delayed for several weeks, he told AMs it was now a matter of urgency:

“The reality is that we have obtained every drop of leverage….and now is the time to ask this Assembly to do what we as a Welsh Government committed to doing in the inter-governmental agreement—to repeal the Act. This is now urgent. As the Constitutional and Legislative Affairs Committee has noted, a programme of corrective statutory instruments is already under considerable time pressure. Repealing the Act will remove one hurdle that impedes the progress of UK secondary legislation, which, in turn, has a knock-on effect on our own programme.”
– Finance Secretary, Mark Drakeford

He later stressed that powers held at Westminster are “frozen” and all current arrangements will remain in place until the UK agrees on possible changes; no powers have left Wales.

Shadow Brexit Minister, Darren Millar AM (Con, Clwyd West), criticised the delay on the repeal vote as well as the use of emergency legislative procedures to pass the Bill in the first place.

“You said that you would repeal this Bill and I think everybody was expecting that it would happen much more quickly than the many months that it has taken before you tabled this motion today. But I think you’re quite right, Cabinet Secretary, to say that this Bill offers no leverage in the future to the Welsh Government or the National Assembly for Wales, in terms of squeezing anything more out of the UK Government in terms of respect for the constitutional settlement.”
– Shadow Brexit Minister, Darren Millar AM

He hoped that other parties would “act responsibly” and respect the decisions and agreements made by the Welsh Government and the UK Government.

The UK Government can’t be trusted

One of the leading proponents of a Continuity Bill, Steffan Lewis AM (Plaid, South Wales East), argued that the Bill was necessary but wouldn’t have been needed if the devolved nations were treated with respect.

“Like the Welsh Government, I would much rather there not be a need at all, or in the first place, for Welsh continuity legislation. It has always been my view that the UK Government, if they really cherished this Union, if they genuinely respected the nations of the UK, then from the outset the mechanics of EU withdrawal could and should have been negotiated between the nations of the UK before Article 50 was triggered.”
– Steffan Lewis AM

He was fearful that should the law be repealed, it could lead to lasting doubt over how the Senedd can make laws, and warned that the UK Government have form for breaking the Sewel convention (where the UK Government and UK Parliament ask permission before making laws in devolved areas) and can’t be wholly trusted.

Both Jane Hutt AM (Lab, Vale of Glamorgan) and Mick Antoniw AM (Lab, Pontypridd) – more reluctantly – hailed the inter-governmental agreement as a sensible compromise, while Dai Lloyd AM (Plaid, South Wales West) listed a number of examples where British interests have trumped Welsh interests.

While supporting repeal, David Melding AM (Con, South Wales Central) did, however, acknowledge some of the challenges now facing Unionists:

“….this is the point where I do recognise some of the reservations and concerns that Plaid Cymru has: we now start with a model of shared governance. It’s still a little clumsy—it’s being crafted—but, in our post-Brexit existence, which will come into play sometime next year presumably, the way the UK deals with its inter-governmental arrangements and the need for shared governance over key areas, which does involve all of the Parliaments of the UK—that will really test the strength of the Union”.
– David Melding AM 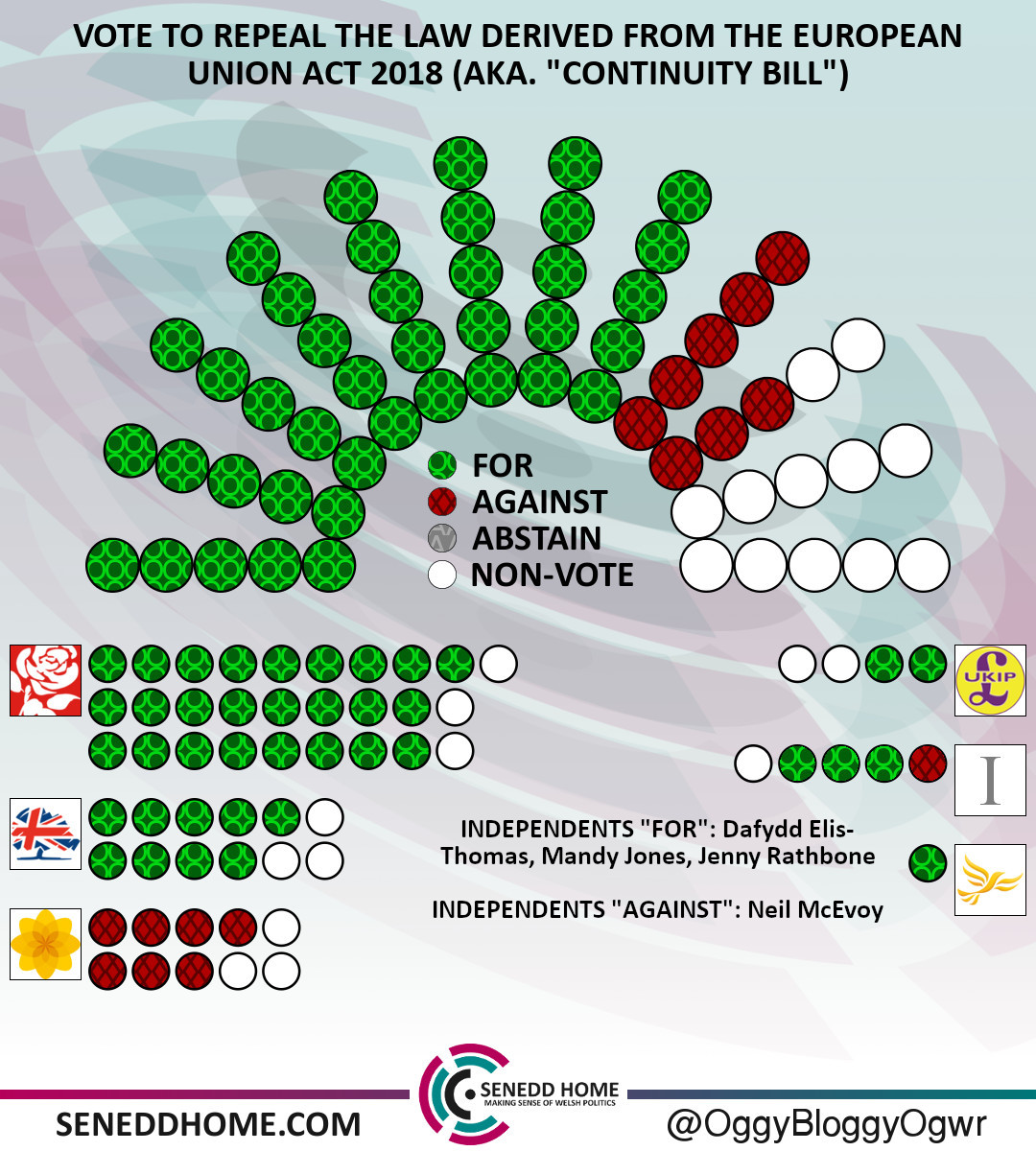