With Mark Drakeford (Lab, Cardiff West) officially sworn in as First Minister earlier today, his first task was to form a new Cabinet. 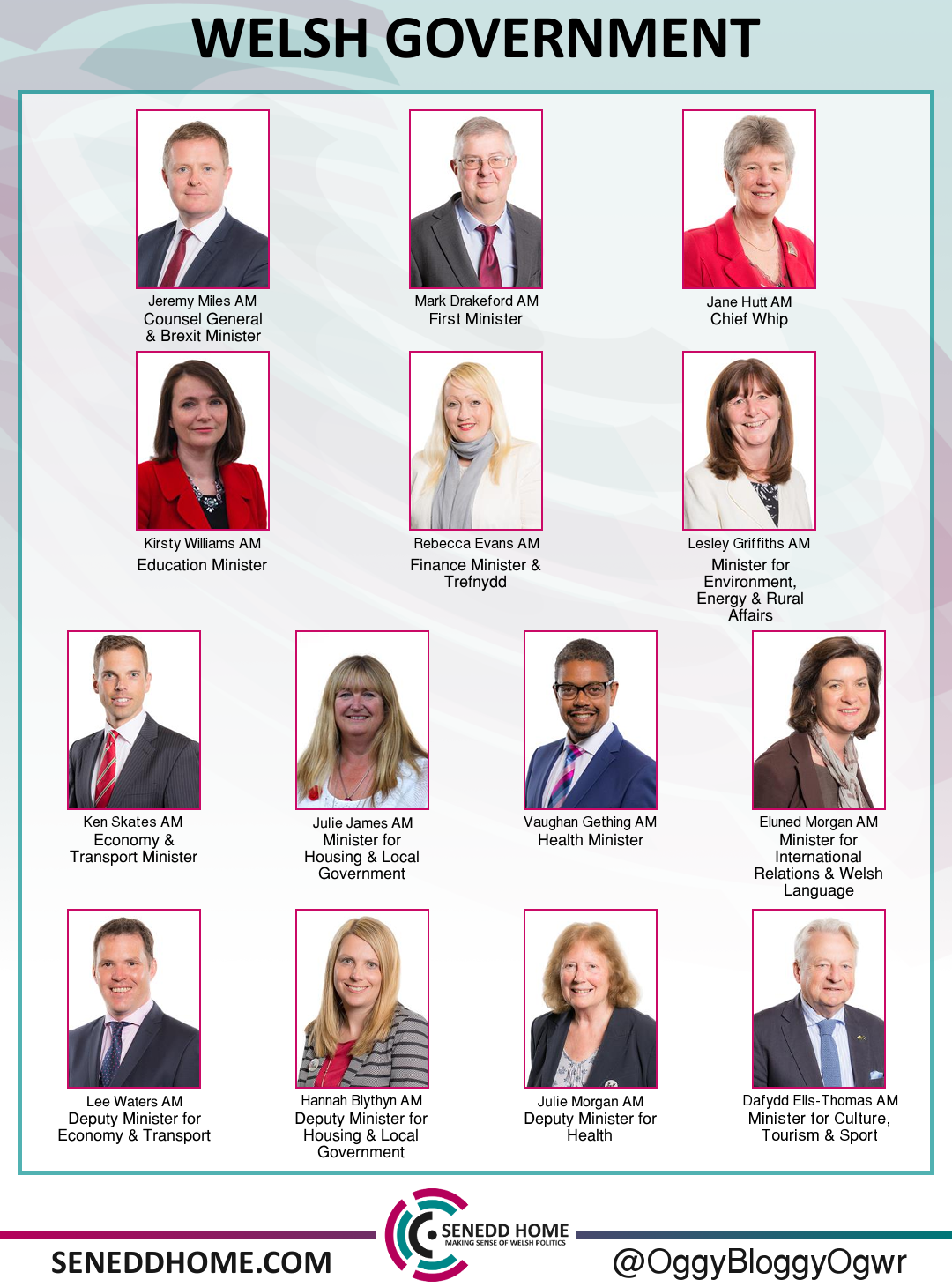 . Ken Skates has since confirmed he’ll be taking up ministerial responsibilities for North Wales. Also, the Welsh Government as a whole is gender-balanced 50:50 while the Cabinet alone (including the Chief Whip) is majority women.

In: Rebecca Evans AM (Lab, Gower)
Out: Mark Drakeford AM (Lab, Cardiff West)

A big promotion for Rebecca Evans. It’s one of the most important roles in the Welsh Government and is a clear sign of faith by the new First Minister. Mark Drakeford has opted for a Welsh title for what is known as Leader of the House (who arranges government business).

This is Alun Davies’ old job but re-titled. It’s effectively a promotion for Julie and is part of a commitment by Mark Drakeford to create a cabinet-level post for housing. Alun returns to the backbenches – where he’s traditionally been stronger – and hasn’t been able to hold down a government role yet again.

The Economy & Infrastructure Committee recently recommended that the Welsh Government create a cabinet-level post dedicated to external affairs and Eluned has got that job, whilst retaining her Welsh language responsibilities. It’s unclear as of yet what her international affairs role will entail. Will it be trade? Will it a semi-diplomatic role? Will it clash with Jeremy Miles’ Brexit portfolio?

In: Jane Hutt AM (Lab, Vale of Glamorgan)
Out: Julie James AM (Lab, Swansea West)

A surprise return to (near) the top of Welsh politics for Jane Hutt, who left government in the ill-fated November 2017 reshuffle. It’s unclear if this means she’s also the new Leader of the House as the press release said she also has an unspecified Deputy Ministerial role – maybe as a floating “Minister without Portfolio” or Deputy First Minister.

In: Julie Morgan AM (Lab, Cardiff North)
Out: Huw Irranca-Davies AM (Lab, Ogmore)

Considering the close relationship between Mark Drakeford and Rhodri Morgan, it’s perhaps not entirely surprising that Julie Morgan received a ministerial job – effectively taking over from Huw Irranca-Davies, who will be taking up a role with a post-Brexit regional policy committee.

In: Hannah Blythyn AM (Lab, Delyn)
Out: Rebecca Evans AM (Lab, Gower)

It was somewhat inevitable that Lee would get a ministerial position at some point, but this appointment has potentially big implications. Lee is one of the most outspoken critics of the M4 Newport bypass while his “supervisor/boss”, Ken Skates, has spoken out in favour of the bypass in principle. Will he compromise his principles and vote for things he doesn’t agree with to remain in post? Or will he help push policy – on transport and things like digital/automation – in his preferred direction?