It seems there was a strong housing theme to Senedd’s debates this week, culminating in the Conservative-led debate on homelessness yesterday afternoon – and there’ll be more on this at State of Wales next week.

Shadow Housing Minister, David Melding AM (Con, South Wales Central), said the motion was drafted to be as non-political as possible as he was sure there was a lot of consensuses that housing should be a basic human right despite different ideas on how to achieve a reduction in homelessness.

Citing good work undertaken by charities working with veterans and expressing support for repealing the much-criticised Vagrancy Act 1824, the main conclusion of the Conservative’s plan was a need for a cross-department approach to homelessness.

“….we need a more holistic approach and housing first is the best example at scale now of a holistic approach….It’s not good enough to say that housing is simply the answer to homelessness, because it’s a problem that spans across agencies, from health to education, housing to employment. So, we do need a holistic cross-agency approach, and that is why we chose as the title of our policy ‘More than a Refuge’. We reflected on the causes of homelessness, which are complex and overlapping, and I was impressed by the Auditor General’s analysis….He said it’s ‘much more than putting a roof over people’s heads.'”
– Shadow Housing Minister, David Melding AM

Neil McEvoy AM (Ind, South Wales Central) tabled several amendments and stood by a belief that property ownership was essential for wealth, criticising the ban on Right to Buy when some AMs own up to three properties yet deny working-class people a chance to own one.

Leanne Wood AM (Plaid, Rhondda) said this had to be put in a broader context of austerity and cuts to support for housing and the homeless – pointing to a recent report that 32,000 households in England and Wales have been abandoned by local authorities for supposedly losing contact. The time has come to stop talking and start doing.

The private sector has a responsibility too

“I think the private rented sector can and should contribute to relieving homelessness. We may need 40,000 new social sector homes, but that would take 10 years, even under a Conservative Welsh Government, so I think the private sector should also be an active agent of providing good-quality housing as well as being good partners. In Swansea, the Wallich and Dawsons estate agents have helped clients who had experienced homelessness find sustainable accommodation by offering guarantees instead of cash bonds to landlords, together with support through benefit delays and rent arrears, for example.”
– Suzy Davies AM (Con, South Wales West)

Mike Hedges AM (Lab, Swansea East) once again called for a ramping-up in council house building, while Mark Isherwood AM (Con, North Wales) warned that some people might not be included in homelessness statistics. He added that there had to be an ambitious house-building programme, but Labour has slashed social housing grants by 71% in the three terms since 1999.

Many AMs expressed shame that people were still living rough in one of the world’s largest economies, but there was one AM who had a more direct experience:

“I stand here today….as someone who was homeless for a short time as a young 15-year-old person. Due to a really bad home life, I needed somewhere to stay, so I lived in a caravan with friends in return for odd jobs with a travelling fair. Six weeks later, when I was assaulted and almost raped, I had no choice but to return home to further assaults from my stepmother. That went on and on. I was going round in circles for years. I didn’t know where to turn, so I think I was what we call today a ‘sofa surfer’.”
– Mandy Jones AM (BXP, North Wales)

Local Government & Housing Minister, Julie James (Lab, Swansea West), was heartened by the consensus on the need for urgent action, but didn’t understand the lack of comprehension at the root cause:

“The local housing allowance has been zero-rated since 2016. So, the result of that is that if you’re in the private rented sector, and you’re on universal credit, you are paying the difference between the local housing allowance and the rent in that sector. That is driving homelessness. That is a direct Conservative Party policy. I don’t know what’s going to happen next year, but if you have any influence on that, please try to bring it to bear.”
– Local Government & Housing Minister, Julie James

While the Welsh Government were doing what they could with the levers at their disposal – spending £20million alone this year increasing housing supply – the single biggest thing that would make a difference is reform of local housing allowance element of universal credit. 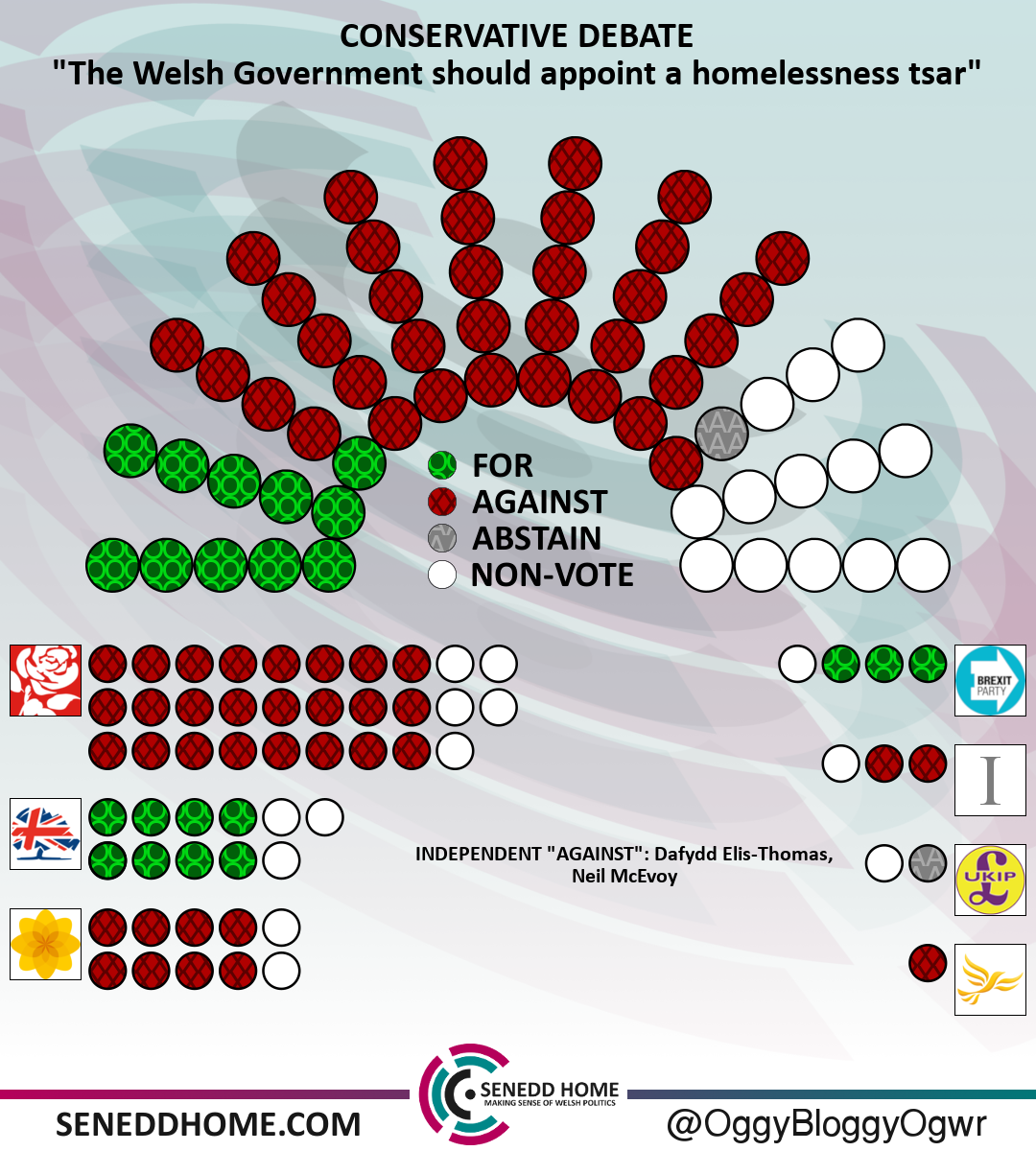