The state should intervene when the status quo is failing

Sian Gwenllian MS (Plaid, Arfon) described the forthcoming Curriculum Bill (set to be tabled next week) as one of the most important pieces of legislation in the Senedd’s history.

The Welsh Government has accepted that parts of the curriculum should be mandatory, but the absence of Welsh history (including BAME history) in the mandatory elements reduces opportunities to help eradicate racism and ensure children have a full understanding of their own history. Additionally, the inclusion of English as a mandatory element will mean all students will learn English until age 7, but this would have a knock-on impact on Welsh-medium immersion.

The Conservatives supported part of the motion, but Shadow Education Minister, Suzy Davies MS (Con, South Wales West), argument that the implementation of the new curriculum should be delayed.

“….just under half of schools said they were doing no (curriculum) development work at all, with the remainder only doing some. 76% cent of teachers told us that this period was having a negative effect on their preparation, with all planned work for the summer cancelled, and when asked the open question, ‘What support could Welsh Government offer at this time to support your curriculum development?’, by far the majority response was, ‘Delay its implementation’ – not its introduction, but its implementation.”
– Shadow Education Minister, Suzy Davies MS

Former teacher Neil McEvoy MS (Ind, South Wales Central) argued that language immersion courses should be freely available to students and teachers and also argued that modern foreign languages should be taught from the first year of school and that BAME history was a part of Welsh history, not separate from it.

Leanne Wood MS (Plaid, Rhondda) noted an inconsistency in how history was being taught, particularly Wales’ involvement in slavery. If making sex and relationship education mandatory was about protecting minorities, then surely it extended to history as well?

Jenny Rathbone MS (Lab, Cardiff Central) made a similar case for religious education as nationality and religion are the basis for discrimination in addition to race. Rhianon Passmore MS (Lab, Islwyn), however, thought it was provocative for Plaid to demand that English isn’t a mandatory element when there’s a clear aim for all students to eventually be fluent in English and Welsh.

Delyth Jewell MS (Plaid, South Wales East), however, argued that poor or absent teaching of Welsh history could rob children of their own sense of identity. Also, placing English-medium education as a pre-requisite for all children contradicts the Welsh Government’s aim of 1 million Welsh-speakers by 2050.

Estyn to lead review of BAME history in the curriculum

Education Minister, Kirsty Williams (Lib Dem, Brecon & Radnor) ran through what MSs could expect when the Curriculum Bill is introduced.

There won’t be a prescribed list of topics to teach, but Estyn (school inspectorate) will ensure their review of Welsh history takes into full account BAME history and culture. Under-representation of BAMEs in the education workforce was another area the Minister hopes to address.

“The humanities area of learning and experience will also provide opportunities for learners to learn about their heritage and sense of place through a study of Wales and their cynefin (“habitat”). Crucially, as has been mentioned a number of times this afternoon, it will allow learners to develop an inquiring and questioning mind, and will explore and investigate the world – past, present and future – for themselves.”
– Education Minister, Kirsty Williams

The Minister said Welsh-language immersion will be allowed to continue and to be given a legal footing – though she didn’t explain this further, although adding that she was open to further discussion on the matter with members.

(Owen: This graphic has caused a lot of controversy, but if you bothered to read any of the above you’ll realise it was 100% accurate – note the motion at the top of the page; that’s what the vote was based on. It was rejected.)

A version of the motion amended by the Welsh Government, which included support for Estyn to review the history curriculum and support for all learners to learn Welsh and English, was passed by 30 votes to 12 with 14 abstentions. 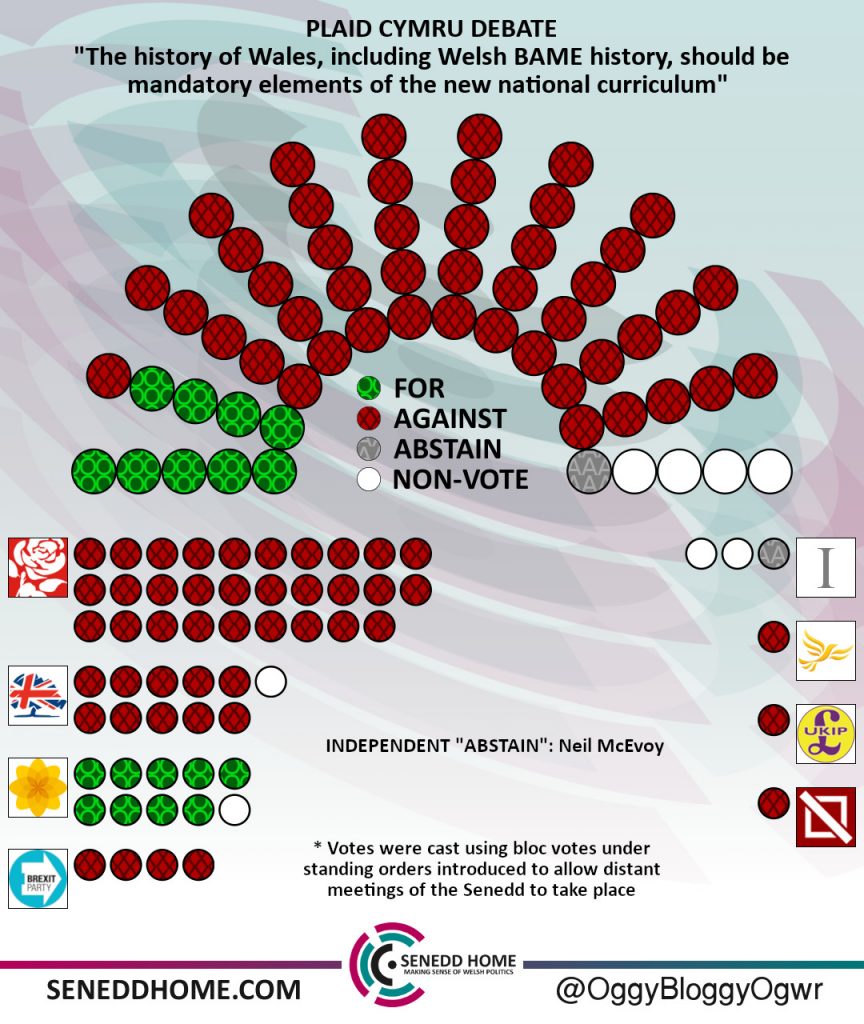