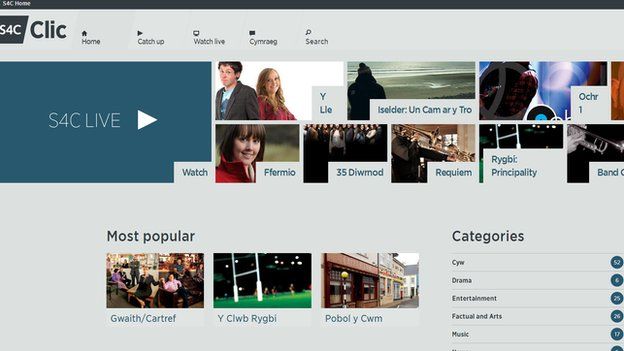 “S4C….has widespread support within Wales and has sustained and enhanced the way the Welsh language is used in a modern world and….media. However, it now needs a thorough, forward looking assessment of its role, remit and funding to help it ensure that it can continue its successes with confidence into the future.”

Broadcasting is non-devolved and a review of S4C by the UK Government was due to start in 2017 – though an announcement on that is yet to be forthcoming.

There were calls from witnesses for S4C’s remit to be modernised to take into account new technologies, not just be restricted to television, and its remit should also reflect high viewing figures outside Wales. There were even questions as to whether a TV broadcaster is a right medium for the Welsh language, with a move towards a greater emphasis on online and other digital platforms.

There’ve long been concerns about cuts to S4C, with funding falling from £101million in 2011-12 to just over £81million in 2016-17. There were more specific concerns about the deal S4C agreed to move to Yr Egin in Carmarthen, with S4C paying £3million in rent up front. However, the Committee did welcome the measure of stability in S4C’s funding via the new licence fee agreement which will run to 2021-22 and maintain cash levels as is.

It currently costs £10,800 to produce one hour of programming for S4C – said to be the “lowest it’s ever been”. S4C believe they need an additional £6million a year to provide content for a new digital platform without affecting its existing budget.

There was some disagreement on how S4C could exploit licensing its content to raise revenues; Tinopolis believe S4C should retain rights for Welsh language content and provide it for free, other production companies would prefer to retain rights for themselves, while former head of digital at S4C, Huw Marshall, believes rights should reflect online viewing.

S4C’s long-term vision is to become a public service media content provider, not just a broadcaster, with services provided across multiple platforms. This also means that S4C’s services will require greater visibility – equivalent to that of other public service broadcasters – on outlets like Youtube, Amazon Fire and Facebook that it currently doesn’t have.

In terms of governance, while the Welsh Government doesn’t support devolution of broadcasting it believes the governance arrangements for S4C should reflect “the reality of devolved government” – meaning local accountability (i.e. boards, Assembly scrutiny) without necessarily having local control. In practice, this means full Ofcom regulation, a service licence and the creation of a statutory S4C board to replace the (present) independent S4C Authority.

The partnership between the BBC and S4C should also be updated, with the possibility of more co-productions with other broadcasters like ITV. The Minister for Lifelong Learning, Alun Davies (Lab, Blaenau Gwent), told the Committee of his desire for S4C to offer tie ins with intellectual property for or about Wales by working with the Wales Books Council (i.e. making TV adaptations of Welsh language literature).