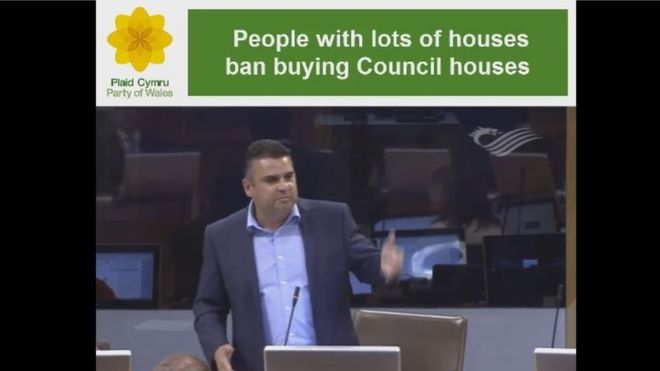 Depending on who you ask, Neil McEvoy AM (Plaid, South Wales Central) is either a breath of fresh air or another populist loudmouth. Based on his actions since 2016, he’s frustratingly inconsistent and somewhere in between – doing the Lord’s work one minute (Deryn/lobbying, land sales) but ruining it the next with a knee-jerk outburst or pursuit of personal vendettas, the latest resulting in yet another completely unnecessary suspension from the Plaid Assembly group.

Internal disagreements over policy are nothing new, but they become a problem when aired in public as it seeds disunity and displays a lack of discipline. Yet again, Neil has gone against the grain by coming out in support of Right to Buy (which is being phased out in Wales via a new Bill), saying it enables people on low incomes to buy a home….and he has a point, not that I necessarily agree with it as one of the big problems is a reduction in housing stock.

That’s not Plaid policy either as Communities spokesperson – and former partner – Bethan Jenkins AM (Plaid, South Wales West) was quick to point out politely but firmly over Facebook. The problem there is by doing so she made an internal disagreement public too, splitting Plaid supporters into “he said, she said” camps (again), turning Neil into a martyr ahead of conference season (again), just as it seemed speculation over Leanne Wood’s leadership and the direction of the party had subsided.

The underlying lesson from all this is a piece of ancient wisdom: “Don’t s**t where you eat” when it comes to relationships.

The second lesson (for Leanne Wood in particular) is that you could see a personality clash between the two coming a mile off and it’s clearly not entirely about policy. As the leader, Leanne will have to get them to wind their necks in and work alongside each other for the next four years; being two of the highest paid public officials in the country isn’t motivation enough it seems.

Cervical cancer drug ruled out for routine Welsh NHS use

A drug used to treat patients with terminal cervical cancer (Avastin) won’t be available to patients in Wales, despite being approved for use in Scotland and England.

Each dose costs around £242 but has some nasty side effects despite prolonging the life of patients by 26%. However, the All-Wales Medicines Strategy Group (which makes these decisions) rejected the drug’s widespread availability on the NHS, though doctors will be able to apply for their patients to receive Avastin on a case-by-case basis.

Last week, Education Secretary, Kirsty Williams (Lib Dem, Brecon & Radnor), launched a new “pocket guide” to help teachers reduce their workloads. It’s part of a wider £1.28million project to “reduce bureaucracy” as workloads are often cited as one of the most off-putting parts of being a teacher.

The Education Secretary said, “We are working closely with the profession to help teachers be the best they can be for the benefit of pupils. I want to get the basics right and let teachers get on with teaching so we can continue to raise standards.”

Severn Crossing tolls to be reduced (before being scrapped)

The UK Government confirmed that Severn Crossing tolls will be reduced (for apparently the first time ever) on January 1st, before being scrapped completely by the end of 2018 – as promised in the 2017 Conservative manifesto. Car tolls will be cut by £1.10, while lorries and coaches will pay £3.30 less.

The Welsh Government plans to cut the proportion of adults who smoke from 23% to 16% by 2020 in a new plan launched on September 19th.

Some significant progress has already been made with smoking rates standing at 19%, but new measures announced by Minister for Public Health & Social Services, Rebecca Evans (Lab, Gower) include expanding the number of public places where it will be forbidden to smoke, introducing a new licensing system for tobacco retailers and expanding/improving quit smoking services.

All measures build upon provisions in the Public Health Act 2017.

Decision on “Animal Abuse Register” due by July 2018