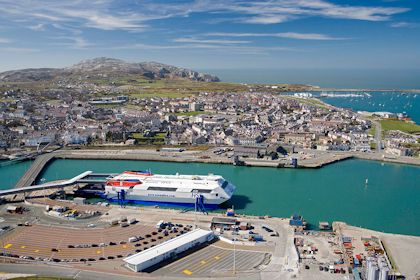 “Urgent action will be necessary if our worst fears – of lengthy delays at our ports, disruption to wider supply chains and tailbacks on our roads – are to be avoided….Furthermore, we are clear that the Welsh Government will need to clarify the timescales for work on technological solutions to future customs arrangements with HM Revenue and Customs and the UK Government. “

Wales has seven designated “major ports”, while all 32 ports in Wales support 18,400 jobs and contribute as much as £1billion to the Welsh economy. Around 11% of all UK trade (by volume) passes through Welsh ports every year.

Powers over ports and shipping policy are non-devolved, but Wales will have extra powers over smaller harbours as part of the Wales Act 2017.

In terms of Brexit, the major implication to Wales and its ports is the future of the UK-Irish border, Holyhead being the second largest roll-on, roll-off ferry port after Dover in the UK.

Most of the concerns stem from the idea that Northern Ireland could have a “soft border” with the Republic, while Wales will have a “hard border” (with full border controls and customs checks). This would put Welsh ports at a competitive disadvantage and mean freight to/from Ireland re-directs through Northern Ireland.

A solution may already be in place with the Common Travel Area, which allows passport free travel between the UK, Republic of Ireland and Crown Dependencies and predates the EU. The Committee believes this arrangement should be retained.

Problems associated with the reintroduction of customs checks could be solved through technology (i.e. pre-clearance/number plate recognition), but there are concerns such a solution may not be in place by 2019, neither have the costs or technological implications been fully laid out by either the UK or Welsh governments.

One of the major problems with heightened customs checks is the lack of capacity at Welsh ports to implement them. There simply isn’t the room available to check every vehicle, meaning the prospect of lengthy traffic jams in and around ferry ports, with one calculation estimating possible 5-6km queues on the A55.

Amidst the problems, there are opportunities from Brexit. 40% of Irish businesses are considering moving some of their production or processing centres to the UK and Wales would be well-placed to be a base of operations.

Academics from Cardiff University argued that Wales should also explore the creation of a Free Port – where VAT, import duties and other charges wouldn’t apply. It was suggested Milford Haven, Cardiff or Newport would all be suitable. This would be reliant on the UK government designating a Welsh port a Free Port – something the Welsh Government said they would lobby in favour of.

Wales, Scotland and Northern Ireland to be shut out of post-Brexit trade negotiations