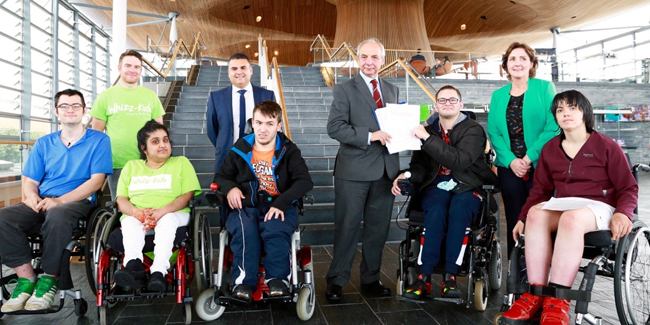 1. The “Orange Wallet” should be rolled out across public transport

The “Orange Wallet” is a Welsh Government-backed scheme which enables autistic passengers to tell transport staff what they need or want through written instructions. It’s currently accepted by most rail and bus services in Wales and transport staff are said to be fully aware of the scheme, but the Committee believes the time’s come for it to be rolled out on all forms of public transport including taxis.

2. The new rail franchise must improve disabled access to trains and stations

Whizz-Kidz Cardiff (who submitted the petition) said station design doesn’t help them, with ramps being available in one direction at stations, but not for the return direction. A number of Welsh railway stations have been improved, or are due to be improved, as part of the Access for All scheme while 93% of Welsh stations are said to be accessible.

However, the trains themselves are another problem, with lack of space for wheelchair users partly due to physical lack of space on the trains themselves or “competition” for space with prams, luggage and bicycles. Buses have had to be accessible since January 2017, but trains have until 2020 and there’s a risk trains used on the Wales & Borders franchise (not Great Western or Virgin Trains) won’t be ready in time – a “major cause for concern”.

3. Transport staff should be trained to understand the needs of disabled passengers

The petitioners want a “turn up and go” service like everyone else as the current service limits social and travel opportunities. Disabled passengers are advised to contact a station 24-48 hours before they travel if they need additional support, while staff are sometimes unavailable to help disabled passengers off a train. A major challenge is that the vast number of stations in Wales are unstaffed.

Petitioners complained about a lack of empathy from staff, suggesting they have an attitude of, “You’re used to it, just get on with it” with a reluctance by bus drivers, in particular, to leave their cab to help. There were calls for all rail, bus and taxi staff to have disability awareness training as part of their courses (like PCV licences), though it’s going to be mandatory for bus drivers anyway from March 2018.

4. More consistent standards for taxis should be introduced

Taxis are the most popular form of public transport used by disabled people, but there are a limited number of accessible vehicles available for hire and examples of poor behaviour by drivers. Taxi licensing and regulation is due to be devolved to Wales in 2018 and there have already been suggestions that all taxis could be disability accessible.

It’s likely a new law will be introduced in Wales laying out new national standards, but bodies representing taxi drivers believe the cost-per-vehicle could be up to £4,000 – which might need to be subsidised.

5. “Sneaky” extra charges for wheelchair-bound taxi passengers should be eliminated

Whizz-Kidz provided evidence that some taxi drivers start meters before disabled passengers have even been helped into the vehicle. The Committee said the practice was “unacceptable” and breaches equalities laws which strictly forbid taxi drivers from charging in this manner.