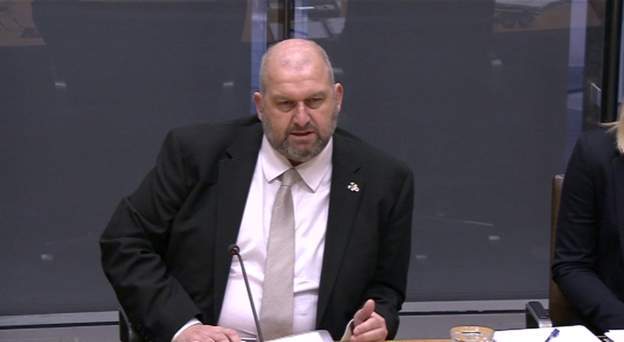 It’ll never quite be the same again, but the Senedd has resumed normal business following the death of Carl Sargeant. It was the first opportunity for his friends and colleagues to pay tribute publicly.

Before a minute’s silence was observed, The Llywydd, Elin Jones (Plaid, Ceredigion), said Carl’s death had “shaken us to our core and his absence….still pains us”. She offered her condolences to friends and family who were in attendance and later said, Carl’s legacy “will continue to touch the lives of many people across the nation for years to come.”

After Carl was elected to represent Alyn & Deeside in 2003, he and the First Minister became friends. Carl was “always full of advice” and played a critical part in Carwyn’s Labour leadership election. Carl was, “Well-liked and committed, jovial but determined, firm but fun, and he will be missed by his family, by those in this Chamber, and by the nation.”

Leader of the Opposition, Andrew RT Davies AM (Con, South Wales Central), said that for “a man from the factory floor” to pass so many difficult laws was a hell of a legacy. He wanted to remember the happier memories; “always a smile on his face, always a kind word to say, always a quip as well as you walked down the corridor.”

Leanne Wood AM (Plaid, Rhondda) paid tribute to Carl as never being able to be “accused of being out of touch” and someone who was rooted in his community as an authentically working-class representative.

Neil Hamilton AM (UKIP, Mid & West Wales) reflected some of the anger around the circumstances of Carl’s death. It was easy for the public to forget that politicians are human beings with families, having been on the receiving end of allegations himself. Nevertheless, Wales had lost “a devoted son”.

Carl’s political achievements and those campaigns close to his heart were marked out.

Joyce Watson AM (Lab, Mid & West Wales) said Carl was instrumental in promoting the White Ribbon Campaign, which encourages men to address domestic violence – something he took up having seen its impact in his area. Rhianon Passmore AM (Lab, Islwyn) said no other AM had been as passionate a champion for women’s rights and equality.

Carl was also instrumental in getting through regulations on domestic fire sprinklers – introduced by Ann Jones AM (Lab, Vale of Clwyd). Jane Hutt AM (Lab, Vale of Glamorgan) paid tribute to his work on regeneration in Barry, commitment to social housing and decisiveness in calling for a fracking moratorium.

AMs noted an afternoon – only a few weeks ago – spent on the streets of Cardiff with Bethan Jenkins AM (Plaid, South Wales West) selling The Big Issue was a sign he was willing to work with others who shared his values.

Simon Thomas AM (Plaid, Mid & West Wales) said the Wellbeing of Future Generations Act – which Carl oversaw – was “one of the crowning achievements of any legislature”.

Amidst the more formal tributes, we heard of Carl’s “cheekier” side. Several AMs noted he was one of the best hecklers in the chamber, while he was always DJ at the Labour Christmas party.

John Griffiths AM (Lab, Newport East) and Nick Ramsay AM (Con, Monmouth) paid tribute to Carl’s karaoke skills; the latter also saying Carl was once mistaken for a bouncer at his wedding.

During Carl’s visit to Ann Jones AM’s constituency when he was Environment Minister, she recalled him sliding down a muddy river bank towards the water, holding onto her saying, “Come on, come on we’re together on this!” She replied, “No we’re not!”

Lesley Griffiths AM (Lab, Wrexham) said Carl was renowned for his “legendary banter” and liked to play practical jokes (such as replacing normal sweets with chilli sweets)….but he had a sensitive side too and took up crocheting baby bonnets.

Alun Davies AM (Lab, Blaenau Gwent) said Carl wore his responsibilities lightly and you would never assume he had achieved what he did; he used to try and make Alun laugh by sending text messages during serious meetings.

Then there were those who perhaps knew him for a longer time than others.

Carl’s former researcher, Rebecca Evans AM (Lab, Gower) said working for him was “a joy”; he was someone who never got caught up in his own importance and she knew him as “the big man with a big heart”.

Not that there was a competition, but the most poignant tribute came from Ken Skates AM (Lab, Clwyd South) who knew Carl since the 1990s and said he, “probably possessed a greater degree of emotional intelligence than most of us in this Chamber today” and if there’s one lesson we can learn from Carl it’s to be kinder to each other.

He added, “there is only one more door you must knock on, but, on behalf of all of those people whose doors were opened, and whose hearts were opened to you—Carl, you take care.”

As you might expect, there were a large number of speakers. Although I wish I could cover all of them to do it justice, I had to be selective for sake of space and time.

Obviously, all I know of Carl is his work – maybe that’s enough in itself – but based on the tributes the impression I get is of a warm, likable guy, a bit of a “fixer” with an under-estimated intellect, well-respected and loved by his peers and someone who made a lasting and noted contribution to Wales.