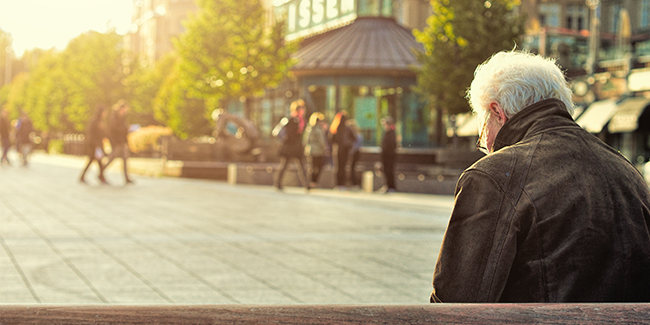 “Loneliness and isolation is something that affects many people across Wales and the UK. You can feel isolated in a big city, as well as in a rural community. A person can also feel lonely in a room full of people.

There is evidence to suggest that loneliness and isolation can have a significant impact on physical and mental health. Reducing the number of people who experience these issues should, therefore, help to reduce demand for health and social services.”

1. Loneliness and isolation are different concepts

25.3% of older people said they were lonely, while 26.9% said they were socially isolated. However, while 75% of women aged 65 and over live alone, only a third of men do but loneliness and isolation are more likely to negatively affect men than women due to male “emotional illiteracy”.

Experiencing persistent isolation and loneliness is statistically as bad for a person’s health as smoking 15 cigarettes a day and is linked to dementia and early death as people who feel lonely may not take regular exercise and it also increases the risk of suicide.

2. Many of the contributing factors are due to the physical environment

One of the key factors that lead to loneliness and isolation is a low population density – 20% of people in Wales live in communities of less than 1,500 residents compared to 10% in England. If you live in these places and have any other contributing factor like living alone, mental health problems, being a carer etc. you’re far more likely to develop a problem than anyone else.

Also, the type of housing may contribute; tightly packed terraces on steep streets may lead to many people with mobility issues becoming housebound.

3. It affects the young and disabled (of all ages) as much as the old

Young people aged 18-24 are more likely to experience loneliness than older people, with loneliness cited as a common reason for people contact the Samaritans. People who have their daily activities limited – such as the disabled, veterans and carers – also experience higher levels of loneliness and isolation.

People with mental health problems are also seriously affected, as are those who’ve just undergone a major transition event in their lives such as a relationship break-up, retirement, bereavement or a partner moving into residential care.

Absolutely anybody can be affected by isolation and loneliness if certain policy decisions are taken such as cutting bus services to rural villages; there are innovative schemes designed to solve this like the much-lauded Bwcabus system.

4. Loneliness and isolation puts pressure on public services (for a sad reason)

People who feel these are more likely to make unnecessary GP appointments, become hypochondriacs, attend A&E and even make more unnecessary 999 calls because they want someone to talk to and often the only people they come into regular contact with doctors and other NHS staff.

This also means that GPs, in particular, are well-placed to spot people who may be at risk.

Research by The Eden Project (yes, that Eden Project) suggests that loneliness and isolation cost Wales £2.6billion a year, with £427million falling on the NHS and £1billion being a result of lost economic productivity.

5. There’s no “One Size Fits All” solution

There are different approaches depending on the needs of the individual, including: