Normally this would be carried out by a Senedd committee, but as AMs voted to treat it as an emergency Bill, the work was done in the Senedd chamber.

To their credit, the Constitutional & Legislative Affairs Committee did manage to put together a report prior to the debate (pdf), so I’m going to use that as the basis for this post and include some of the comments made in the chamber.

It also comes as the First Minister said “time was running out” for the UK Government to reach an agreement with Scotland and Wales on appropriate amendments to the Brexit Bill; further talks are taking place in London as I post this.

1. The Continuity Bill “is needed”

The Constitutional Affairs Committee agreed that until appropriate amendments are made to the Brexit Bill then the Continuity Bill was needed in order to protect the devolution settlement and could be “one of the most important Bills ever scrutinised by the National Assembly”.

Nevertheless, they acknowledge that the preferred option would be for a deal to be reached with the UK Government.

2. The Welsh Government should confirm how it intends to use EU laws after Brexit

One of the key recommendations of the Committee report was for the Welsh Government to clarify how its power to make regulations in relation to EU laws (retained by Wales after Brexit) would work in practice.

The Member in Charge – Finance Secretary, Mark Drakeford (Lab, Cardiff West) – clarified that the power could only be used to make sure the retained EU laws “still worked as originally intended” (Assemblese: “I can confirm….that the power in section 4 to make modifications or further provision can only be used to ensure the effective operation of the restated enactment.”).

3. The Charter of Fundamental Rights should still apply

The Committee believes the Charter of Fundamental Rights should still apply to UK law after Brexit (and has been included in the UK Brexit Bill). They welcomed that the Continuity Bill makes reference to it with regard EU laws (retained in Wales) and any future regulations made in relation to them.

4. Powers to align Welsh and EU laws (in devolved areas) after Brexit via regulations should be curtailed

The Committee wanted an explanation as to why the powers under Section 11 (for Wales to maintain regulatory alignment with the EU after Brexit) couldn’t be done on a case-by-case basis via Bill and Acts (primary legislation) instead of doing it via regulations as proposed; was this justified?

The Committee recommended this power should have a sunset clause after five years, unless AMs vote otherwise and after review by a Senedd committee.

The Finance Secretary told AMs it was justified due to the sheer volume of regulations the Welsh Government are likely to face. Basically, if AMs were tied up with every single regulatory change they would probably have little time for anything else – though he didn’t rule out doing it through primary legislation in the future.

5. Regulations made under a future Continuity Act should be properly explained and justified

The Bill proposes creating new scrutiny procedures for regulations made under any future Act: standard (which requires the approval of AMs and is how most regulations are made in Wales), enhanced and urgent.

The controversy surrounds the urgent procedure because, even though the regulations would automatically lapse after 30 days unless AMs agree otherwise, AMs wouldn’t be presented with a draft version of any regulations.

The Committee recommended the Bill be amended so that, in an explanatory memorandum: the use of the urgent procedure, any changes made by the regulations, what consultation has been undertaken and its impact on equality and human right are properly explained and justified.

In defence, the Finance Secretary said the new procedures “provide for the highest levels of scrutiny that has ever been contained in an Act of the National Assembly. Not only does this highlight the unusual circumstances that we find ourselves in, but it also demonstrates our continued commitment to the essential role that scrutiny plays in ensuring that the best possible legislation is created here.”

The Constitutional Affairs Committee report was opposed by one member of that committee – David Melding AM (Con, South Wales Central). He didn’t believe this was an emergency – citing the low number of AMs in attendance – nor that the Bill was required, describing it as “bogus”.

He argued there hadn’t been “full and proper scrutiny” by the Committee. The proper process is the LCM process (where AMs vote on the UK’s Brexit Bill), not this way which has seen the Welsh Government shifting towards the position of the Scottish Government, whose primary concern is nationalism not the integrity of the UK.

The Tories won’t table any amendments when the Bill moves to the Stage 2 next week as he didn’t want to engage in the “parody that would inevitably follow”, which would almost certainly lead to the Supreme Court.

Of all people, Neil Hamilton AM (UKIP, Mid & West Wales) took exception to David’s contribution, saying, “This is not a bogus Bill, and if there is a constitutional crisis looming, it comes about because something that was entirely predictable has happened because of the neglect of the UK Government to take this process seriously. We’ve been waiting for three months for amendments to this EU withdrawal Bill, and nothing had arrived until the last few hours.”

Mandy Jones AM (Ind, North Wales) said she supported the principle of the Bill but was concerned that AMs hadn’t had the opportunity to discuss it in depth. Gareth Bennett AM (UKIP, South Wales Central) joined the Conservatives in voting against the Bill at Stage 1. 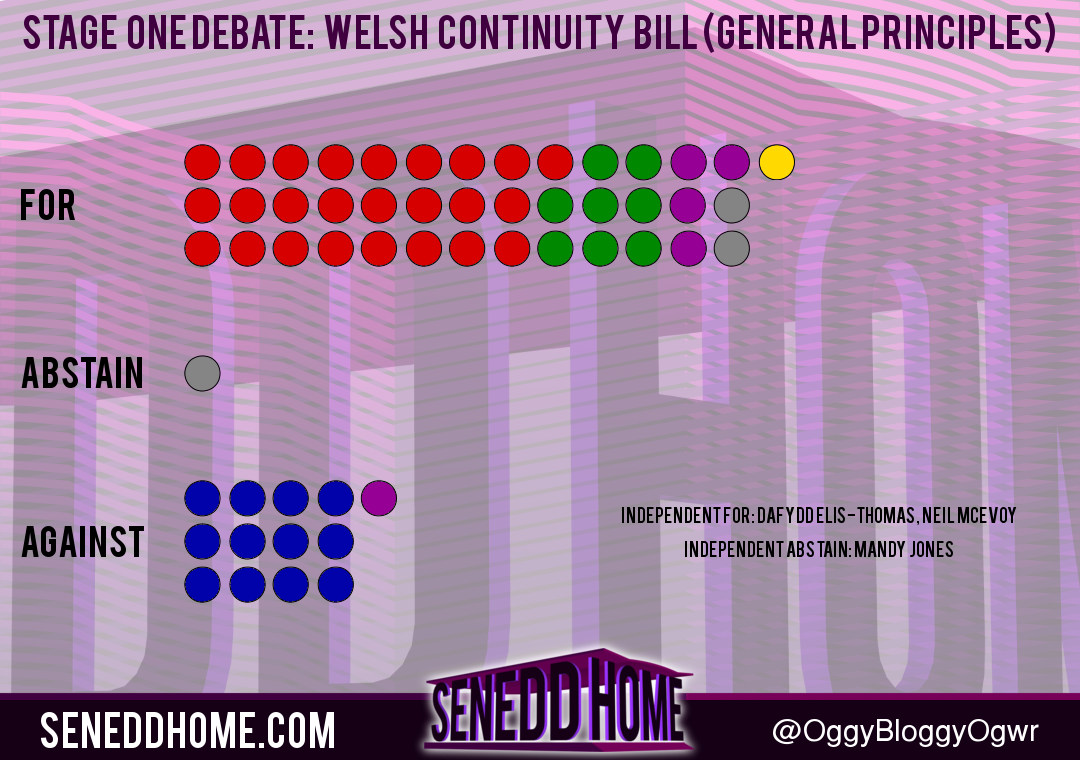