Over the last few months, two backbench debates have taken place on leaseholds and unadopted roads – both resulting in AMs giving very strong views on the matter and backing calls for reform and greater regulation.

Hefin David AM (Lab, Caerphilly) has brought forward a proposal to introduce a new law on “the missing piece of the jigsaw”: the rights of freeholders who live on managed estates.

The Guardian describe it as “fleecehold” – residents who hold a freehold on their property but have to pay unaccountable and excessive estates management fees. Residents are “trapped” in these contracts, with very little oversight of the management companies which are often majority-owned and staffed by major housing developers.

Leaseholders have statutory rights when paying ground rent/service charges, but this doesn’t extend to freeholders.

Suzy Davies AM (Con, South Wales West) believes rent charges are being used “creatively” on large housing estates where, as a result, there are chronic problems with unadopted roads and communal areas. Suzy described it as a “developer’s dream”: completely unregulated, no obligation to consult, no obligation to demand reasonable charges, no rights for rent-payers to either see documents or access a tribunal – it has to be done through the courts.

Bethan Sayed AM (Plaid, South Wales West) bemoaned the poor standard of new-build estates – which has already been discussed by AMs. The fact people could potentially lose their home over unpaid charges is “appalling” and it wasn’t right to ask people to pay twice for the upkeep of a property or neighbourhood (when they pay council tax too, despite their roads being unadopted).

Gareth Bennett AM (UKIP, South Wales Central) said it was a pity that all these issues relating to arbitrary property charges – leaseholds, unadopted roads and “fleeceholds” – couldn’t be wrapped up in a single piece of legislation, but it was correct that rights for freeholders are the same in Wales and England.

David Melding AM (Con, South Wales Central) said this was an area of law “screaming out for regulation or an update” as these sorts of practices were unheard of 10, 20 or 30 years ago. Research from Which? and the UK House of Commons suggests unnecessary service charges and excessive leaseholds could top £1.4billion. The “outrageous” business model housebuilders use where they develop entire housing estates that are unadoptable “has to stop”.

On behalf of the Welsh Government, Housing & Regeneration Minister, Rebecca Evans (Lab, Gower) told the chamber that while a number of measures were announced a few weeks ago in relation to leaseholders, it’s right the situation of freeholders was addressed too and their concerns tend to be similar.

There was no firm commitment to supporting a new law, but the Minister “won’t shy away” and is engaging with the Law Commission to look at property/residential law. Also, a task and finish group will be set up to advise her on what else can be done to professionalise and raise standards of conduct in the property and estates management sector.

In reply, Hefin raised the possibility that several AMs could submit the same Bill for selection in a future ballot to increase the chances of a law being brought forward. 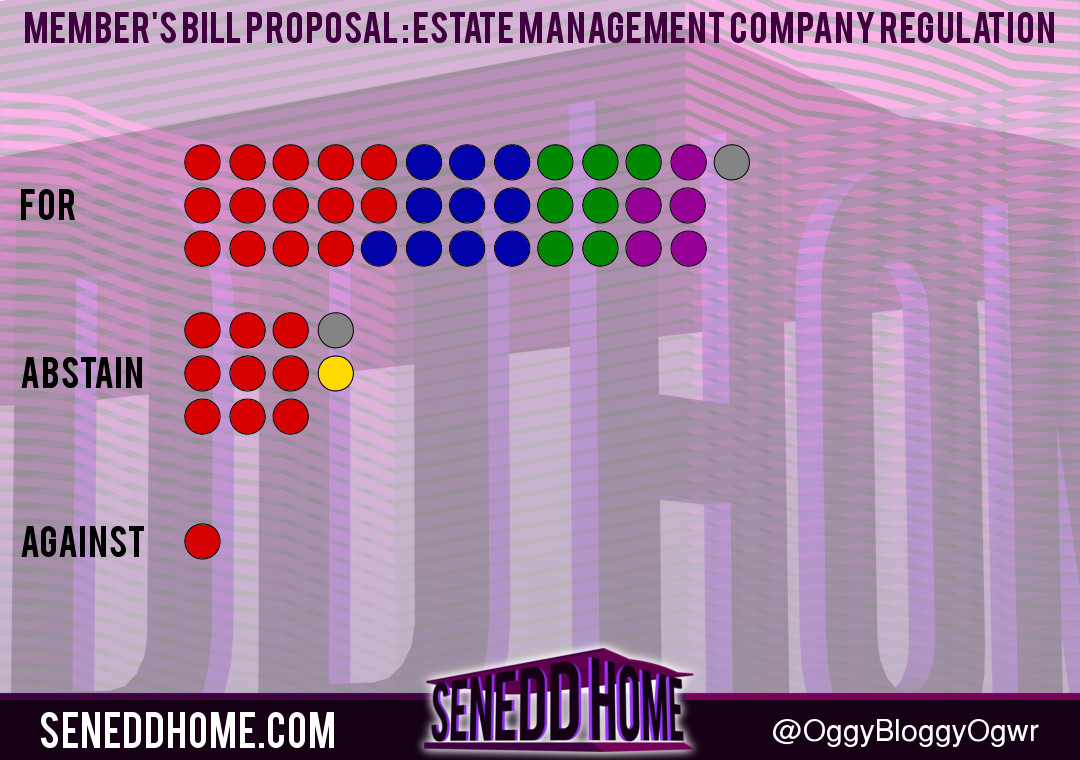 While the Welsh Government abstained, Dawn Bowden AM (Lab, Merthyr Tydfil & Rhymney) was the sole objector; I’m assuming by accident.