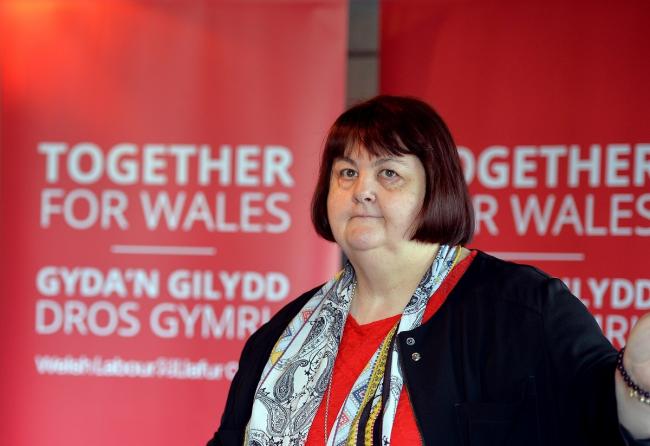 At a WLGA meeting in Cardiff on March 23rd, he was told by the organisation’s leader, Cllr. Debbie Wilcox (pictured), that councils had done “all the heavy lifting” on cuts and the WLGA issued a statement saying the latest announcement, “has caused disquiet and confusion. It has arrived midway through the Assembly term and following recent Welsh Government assurance that no re-organisation would occur for 10 years.”

The Secretary said, “I was pleased the leader of the WLGA accepted that 22 local authorities are not sustainable and was willing to take up my challenge to come forward with alternative proposals….if the WLGA did not like the options in the Green Paper.”

At their spring conference, Adam Price AM (Plaid, Carms. E & Dinefwr) said a Plaid Cymru-led government would hold a multi-option referendum on the constitutional future of Wales, including an option of independence if they win two consecutive terms in office.

It comes as party leader, Leanne Wood AM (Plaid, Rhondda) called for the membership to remain united amidst bad headlines surrounding the 18-month expulsion of Neil McEvoy AM (Ind, South Wales Central) and internal rows within the party’s Llanelli branch.

Natural Resources Wales determined that dredged mud from Hinkey Point nuclear power plant, which is due to be dumped off the coast of Cardiff, poses no risk to human health, with radiological measures “within acceptable limits”.

Samples taken from the site were re-tested independently. Neil McEvoy AM – who led calls for the samples to be re-tested – contested the reporting of the story and demanded a re-think.

“Biggest ever” deficit in health board budgets

Wales’ health boards will have over-spent by £163million in the 2017-18 financial year according to BBC Wales – the biggest ever single-year deficit in the Welsh NHS’s history.

The Welsh Government said, “Investment in our NHS is at a record high and Wales already spends considerably more on health and social care per head than in England. We are also investing an additional £550m over the next two years, including £100m to help transform the way health and social services are delivered.”

111 service to be rolled out nationally

A new non-emergency NHS phone service – which has been piloted in south-west Wales – will be rolled out nationally.

The freephone 24-hour 111 number – which will replace NHS Direct and out-of-hours GP call handling – has been received very positively by users during the pilot, with 95% being satisfied or very satisfied. It’s said that the service may have contributed to a 1% decline in A&E attendances as well as a decline of up to 25% in non-urgent ambulance transport.

Health Secretary, Vaughan Gething (Lab, Cardiff S. & Penarth) said, “People can help make a difference by using our health service sensibly. The 111 service will support people to receive the most appropriate services for their needs, at the right time and in the right place.”

Wales “needs to do more” to increase STEM subject uptake

Minister for the Welsh Language & Skills, Eluned Morgan (Lab, Mid & West Wales) warned that more needed to be done to boost the numbers of pupils – particularly girls – gaining qualifications in science, engineering and maths subjects at a higher level.

Only 12% of women in Wales take a STEM subject at university, compared to 27% in the Baltic countries and Finland. There’s an estimated 40,000 shortfall in skilled workers for STEM-related roles in the UK.

The Minister said, “The lack of women in STEM matters for their individual life chances. They risk missing out on many well-paid jobs and rewarding jobs. More broadly, it limits the talent available to our science base and to businesses….and is, therefore, a constraint on our wider economic prosperity.”

The controversial emergency Continuity Bill – which was passed by AMs just before the Easter recess – has, as expected, been referred to the Supreme Court by the UK Government.

The Welsh Secretary said the move was to provide legal clarity, though the Welsh Government said they would defend the Bill “to the full”.

Discussions are still ongoing between the Welsh, Scottish and UK governments over the impact Brexit will have on devolved powers, with hope still remaining that a deal could be reached.