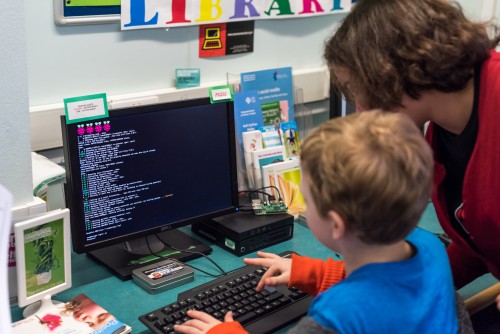 Describing it as a “national mission”, Education Secretary, Kirsty Williams (Lib Dem, Brecon & Radnor), provided an update to AMs on what the government were doing to ensure students have the digital skills necessary to take advantage of new technology.

In fact, the first element of the reforms to the national curriculum has already been introduced in the form of the digital competence framework, which provides learning material for both students and teachers. In addition, last June a scheme worth £1million – in partnership with Code Club UK and the likes of Sony – was launched to improve coding skills. As of March 2018, there were 473 coding clubs in Welsh schools – an increase of 173 on the previous year.

£5million has been made available to improve broadband in schools. In addition, Cardiff & Swansea universities will receive £1.2million to fund “Technocamps” which will provide teachers and students with coding experiences, as well as school liaison activities.

Shadow Minister for Skills, Mohammad Asghar AM (Con, South Wales East) said, while the announcement was welcome, many of the goals set down by the Welsh Government were vague, without timescales and therefore difficult to monitor. Estyn has raised concerns that pupil progress in digital skills hasn’t kept pace with technological changes, with skills often limited to a narrow range of applications. There’s also been a decrease in the number of pupils studying IT to A-Level and there remains a gender disparity with more boys than girls studying IT.

In reply, Kirsty said it was vital IT was embedded throughout the curriculum and not just as a separate class.

Llyr Gruffydd AM (Plaid, North Wales) repeated concerns of the Education & Young People Committee that teachers aren’t wholly aware of what’s coming with regard the new curriculum, and a lack of confidence amongst teachers in delivering digital aspects. He wanted to know if the additional £1.2million was per-year or for the remainder of the term? Kirsty didn’t answer that as far as I can tell.

David Rowlands AM (UKIP, South Wales East) was pleased the scheme has the support of businesses and universities but stressed that programmes that are relevant now may not be relevant in the near future as technology changes so it was important the scheme includes transferable skills that will be useful for the long haul. He also believed it was an opportunity to use coding as a springboard to “traditional” university courses such as logic, pure mathematics and philosophy.

Lee Waters AM (Lab, Llanelli) didn’t believe the statement provided an honest enough assessment of the scale of changes needed. In particular, he was concerned that two-thirds of primary schools fell short in IT skills and that the code clubs may be engaging a “trivial” number of pupils. The lack of confidence amongst teachers in IT skills and lack of vision was also a “damning indictment of the state of school leadership”.

David Rees AM (Lab, Aberavon) echoed that by saying it was often the case that pupils often had better IT skills than staff, who often learned off them; however, he believed staff shouldn’t be frightened of that. He also repeated that more needed to be done to encourage girls into IT, citing Microsoft’s DigiGirlz scheme, which pupils in his constituency recently took part in.