“Time is running out”

“Time is running out to make the changes to our way of life, how we produce and use energy, how we travel around this earth, how we build and warm our homes, how we use our natural resources. Because the trajectory that we’re on in terms of global warming means that unless we change our ways then the implications will be damaging and extreme….”
– Llyr Gruffydd AM (Plaid, North Wales)

The stark message from the outset was due to the aforementioned UN report which says the world is now on the brink of irreversible change unless urgent action was taken. Plaid Cymru’s motion was based mainly on the findings of the Environment Committee’s report which showed the Welsh Government were nowhere near meeting its targets for 2020.

While there’s now a moratorium in place on fracking, with the powers devolved, Llyr was now calling for an outright ban – something the Welsh Government was moving towards but not quite there yet. The decision on the Newport M4 bypass was described as a “litmus test” for the Welsh Government’s commitment to reduce carbon emissions.

Neil McEvoy AM (Ind, South Wales Central) tabled an amendment calling for opposition to nuclear power. Wylfa B is “unaffordable” and nuclear power is far from environmentally friendly as the “carbon cost” was front-loaded in the construction of new plants. In the end, he was the only person to vote for his amendment with 8 abstentions and 41 votes against.

A broad range of measures needed

Shadow Environment Minister, David Melding AM (Con, South Wales Central), thought Plaid’s table of measures was too prescriptive despite broadly agreeing on the fundamental principles – and he rejected Neil McEvoy’s amendment from the outset, whilst also expressing support for alternative methods of fracking.

Perhaps a prelude to the problems the Welsh Government might have in the future vote, Jenny Rathbone AM (Lab, Cardiff Central) said the Newport bypass would be impossible to square with Welsh Government targets to reduce carbon emissions. Nuclear power was also a non-devolved issue so it didn’t matter what AMs thought – though she was willing to see nuclear used as a back-up to renewables. Mike Hedges AM (Lab, Swansea East) said he was a “convincible sceptic” on the Newport bypass.

“A report from the Institute of Welsh Affairs on decarbonisation of transport in Wales states that Wales is more dependent on the car than any other nation or region in the United Kingdom. That states clearly that we do have to do something about this and we do have to seek that modal change. We do talk a lot about it, but we are not making enough progress on it in terms of getting to grips with the problem that we are trying to tackle—in the most fundamental way, getting people out of their cars and onto their bikes or on foot.”
– Rhun ap Iorwerth AM (Plaid, Ynys Mon)

As a brief aside, when he’s on form, Lee Waters AM (Lab, Llanelli) is hands down one of the best backbench AMs there’s ever been in the Senedd and a genuine asset to Labour.

He also, frustratingly, occasionally does or says something that sends him plummeting towards the bottom of the rankings; this time making an odd, bemoaning speech which didn’t address the substance of the debate and decrying the fickle nature of politics whilst playing that game himself.

“I think today’s debate and the motion before us would make a very good case study in what is wrong with the way we do politics, because I look at Plaid Cymru’s motion and there’s nothing in it I disagree with, and yet, this afternoon, I’ll be voting against it….which is presumably why Plaid Cymru have tabled this motion today, to try and trip us up.”
– Lee Waters AM

He said there were times to pick your moments and fight your battles – with a specific gripe over Plaid’s inclusion of the M4 bypass in their motion – and that issues like these are never black and white.

Energy, Planning & Rural Affairs Secretary, Lesley Griffiths (Lab, Wrexham), said the UN report was a sobering reminder. New targets for carbon emissions will go before AMs in December and she has already an “ambitious” target of generating 70% of Wales’ energy needs from renewables (currently standing at 48%).

She outlined a number of actions the Welsh Government were taking such as the new rail franchise, home energy efficiency (Arbed) and renewable energy targets – which were added to the original motion as amendments.

The Welsh Government-backed series of amendments kept a significant chunk of the Plaid motion in place but removed all reference to fracking ban or the Newport bypass (a vote on which is due to take place later this year anyway) – though it retained the reference to disinvestment from fossil fuels. This version was approved by 37 votes to 10 with 3 abstentions.

Here was the vote on the original, unamended motion as outlined earlier. Eluned Morgan AM (Lab, Mid & West Wales) is recorded as voted in favour, but I’m going to assume that was an accident: 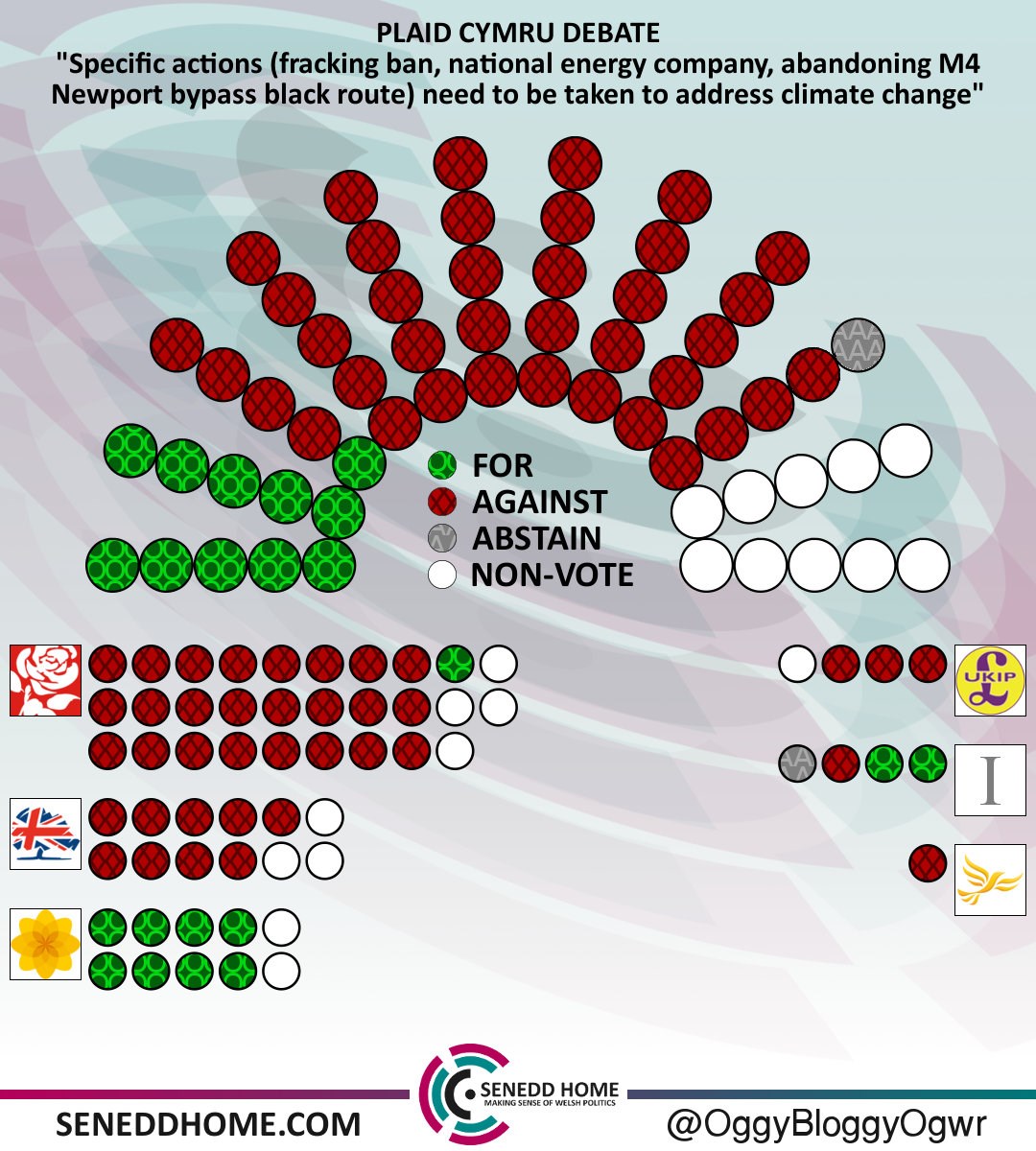