Motions for cross-party backbench members debates are, more often than not, approved unanimously even when the Welsh Government disagrees with many aspects of what’s tabled. Until yesterday….

“The key to unlocking the potential in the Welsh economy “

Bethan Sayed AM (Plaid, South Wales West) said the FE sector has been looked down upon for too long and has been a persistent target for cuts – which need to be reversed.

“….the rising demand for further education and lifelong learning opportunities has been noticeable, as it should be. It’s part of the Welsh Government’s strategy to upskill our economy and to do so, they indicate to us, to equip our citizens with the skills they’ll need to be successful in a modern economy. Yet, the truth is the funding and vision have not been forthcoming.”
– Bethan Sayed AM

There are clear choices to be made in the proposed Welsh budget and the “flexibility” within college budgets is being “stretched to the limit”. It was perhaps coincidental – and welcome – that an announcement of £8million to ensure pay parity between FE lecturers and teachers was made just before the debate, but staff are already considering strike action over pay and workplace pressures.

“Funding for part-time courses has dropped by 71 per cent over the same period….The number of part-time learners at further education institutions fell from over 85,280 in 2014-15 to just over 65,345 in 2015-16—this is a decline in numbers of nearly a quarter.”
– Shadow Skills Minister, Mohammad Asghar AM (Con, South Wales East)

In perhaps the first sign that the Welsh Government were in a spot of bother on this, Vikki Howells AM (Lab, Cynon Valley) spoke up strongly for the FE Sector, citing a ColegauCymru report which says FE’s contribution to the economy was as much as £4billion.

“In ‘Prosperity for All’, the Welsh Government sets out how it will build an economy based on strong foundations, focusing on the industries of the future and empowered regions, and how inclusive growth will be used to narrow ingrained inequalities as our wealth and well-being improves. But….for the Welsh Government to build an economy that works for everyone, the FE sector must be at the heart of this agenda. And it’s easy to see that in terms of a whole range of challenges Wales faces, the FE sector provides the answers and solutions.”
– Vikki Howells AM

Vikki called for the sector to be adequately funded – and there were signs of the Welsh Government’s commitment to this through the development of new campuses like the one in Aberdare. However, staff in the sector need to feel valued.

Dai Lloyd AM (Plaid, South Wales West) raised the important work FE colleges often do with marginalised youngsters and those with conditions like autism and the further challenges they’re likely to face when EU funding dries up.

Minister for Lifelong Learning & Welsh Language, Eluned Morgan (Lab, Mid & West Wales) said the FE sector in Wales was much stronger than in England despite austerity. However, it wasn’t exclusively down to the Welsh Government to upskill workers – employers had to put their hands into their pockets too.

“Our message is clear: we are committed to providing the very best education system we can for learners of all ages. But as a Government, we’ll be voting against this resolution because it fails to note that funding cuts have been caused by Tory austerity. Secondly, we don’t accept extra pressure has been put on FE colleges as a result of the employability plan. We’re suggesting that they reprioritise the provision they’re offering to respond to labour market demands. Thirdly, we’re pleased that we’ve been able to support FE staff, both lecturers and support staff, in terms of their pay claims, and we hope that this will help to avoid industrial action.”
– Minister for Lifelong Learning & Welsh Language, Eluned Morgan

Before anyone gets too excited, the vote carries no weight and isn’t binding on the Welsh Government. However, losing the vote will have been embarrassing.

Is this a sign of Labour backbenchers flexing their muscles Westminster-style?

I suspect it’s a one-off, but with key votes coming up (like the one scheduled for the Newport bypass) as well as a change in leadership, I suspect Labour will want to maintain discipline going into the Christmas recess even for the most innocuous vote. 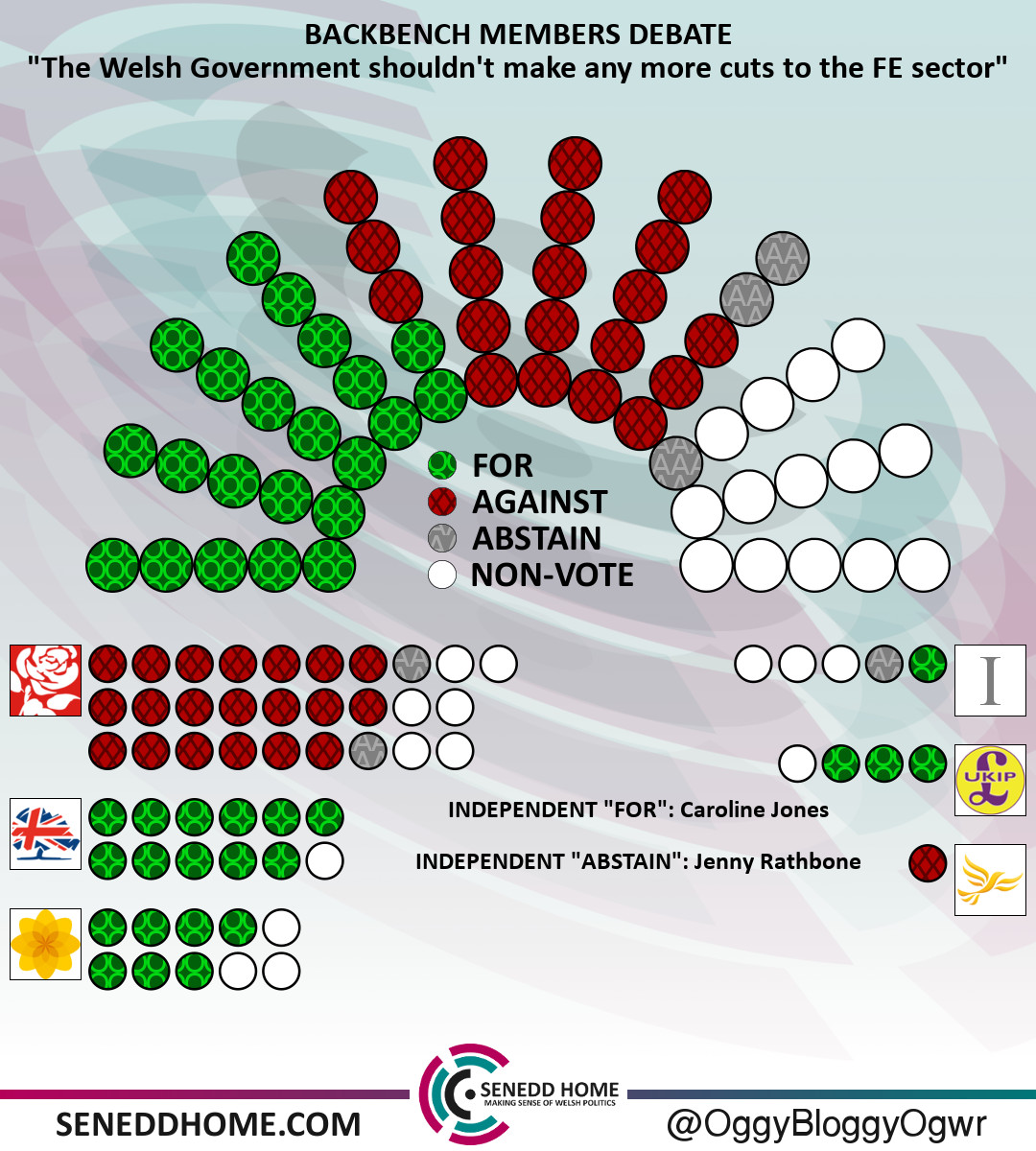