The Secretary said there was a particular opportunity to develop Wales’ marine energy sector, while an increase in the amount of carbon emitted from Wales’ energy sector was a result of hosting 20% of the UK’s gas power generating capacity but only using 5%.

“We need to think about whether we are content to host new gas generation in Wales and, if so, how we can ensure it is compatible with carbon capture and storage. I’m keen to hear Members’ views on whether Wales should only generate electricity for our own needs, or whether we should continue to be a net exporter.”
– Energy, Planning & Rural Affairs Secretary, Lesley Griffiths

The Welsh Government are undertaking an “energy atlas” as part of an agreement with Plaid Cymru, while they are also supporting Swansea University proposals to develop a centre for low-carbon buildings.

A fair chunk of the debate was around nuclear power’s place in a low-carbon Wales.

Neil McEvoy AM (Ind, South Wales Central) tabled an amendment calling for a rejection of nuclear energy. He argued that just because it’s not devolved it doesn’t mean the Assembly can’t have a position on it, and opposition to nuclear power was stronger amongst the public than Senedd votes suggest. His amendment was rejected by 40-1 with 8 abstentions.

The Conservatives took the opposite line, tabling an amendment in support of Wylfa Newydd (which was accepted by the Welsh Government). Shadow Environment Minister, Andrew RT Davies AM (Con, South Wales Central) thought Wales was well placed.

“One thing that Wales has is an abundance of natural resources that if harnessed correctly, could help the energy footprint, not just of Wales, but of the rest of the United Kingdom. I did note that the Cabinet Secretary said that is a question we should pose to ourselves: should we be exporting our energies or should we be generating enough for Wales as a country? I would argue that we are well placed to help the rest of the United Kingdom meet its energy requirements. Indeed, it is very desirable for us to do that, with the host of energy generation that we could put to best use.”
– Shadow Environment Minister, Andrew RT Davies

The Tory amendment calling for greater community involvement in energy planning permissions – with the controversial Hendy wind farm in mind – was, however, rejected.

“Why aren’t we leading the world?”

Plaid Cymru tabled amendments calling for the devolution of all energy powers to Wales and the establishment of a community/publicly-owned National Energy Company.

Llyr Gruffydd AM (Plaid, North Wales) cited the low levels of community energy ownership and relatively slow increases in the proportion of renewable energy as arguments for their amendments.

“As we’ve already heard, we do have the natural resources, we have the natural capital in Wales, to be a world leader in terms of renewable energy. The question, therefore, is: why aren’t we leading the world? What’s holding us back?”
– Llyr Gruffydd AM

If responsibility for energy were devolved, the Swansea tidal lagoon might’ve been taken forward, while community-based energy production and consumption would emulate what’s happening in Germany, Denmark and the Netherlands – all of which have some of the highest renewable energy rates in the world.

“We need to move to all electric and hydrogen-fuelled vehicles a lot sooner than the UK Government’s target of 2050. Because of Wales’s geography, public transport will never replace all demand for personal transport. We, therefore, have to ensure that we replace the car, the lorry and the van with clean alternatives.”
– Caroline Jones AM (Ind, South Wales West)

Plaid Cymru voted against presumably because their amendments calling for the creation of a national energy company and devolution of energy powers were rejected. 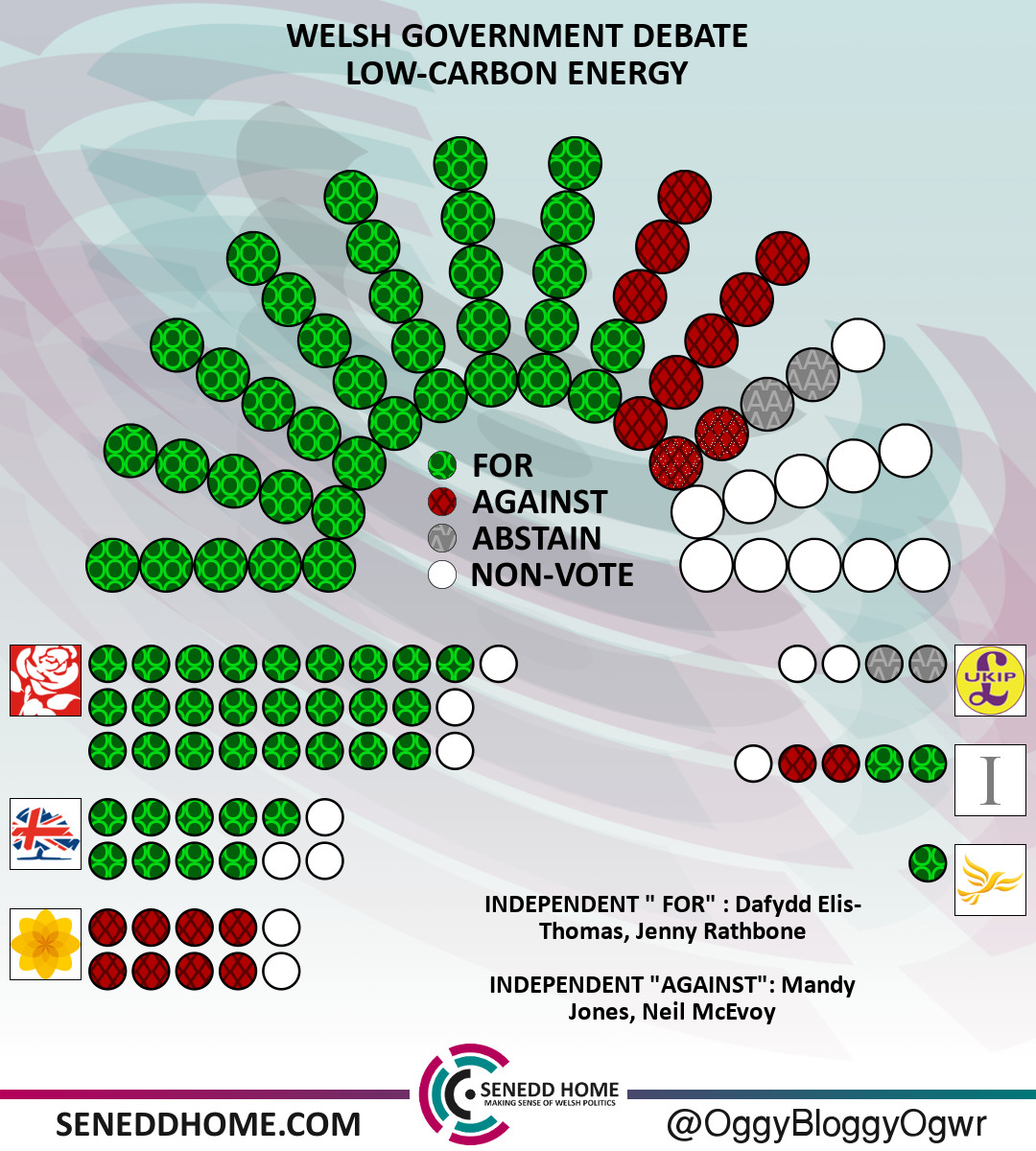