To absolutely nobody’s surprise, the Finance Minister, Mark Drakeford AM (Lab, Cardiff West), was nominated as the next First Minister of Wales by the Senedd this afternoon. 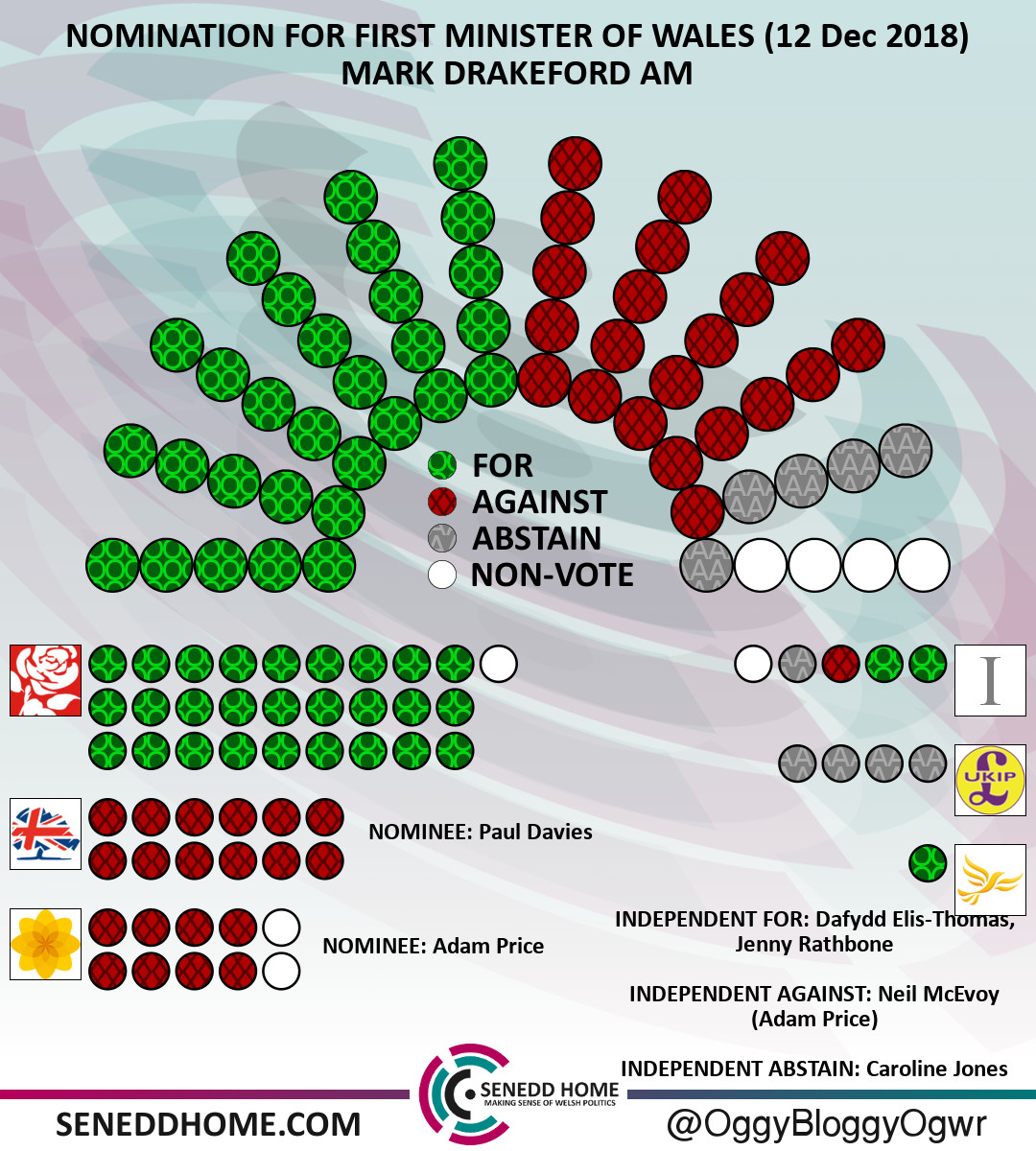 Thanking his predecessor, Carwyn Jones AM (Lab, Bridgend), and party colleagues he said he was conscious of the opportunities and responsibilities that come with the position of First Minister.

With that in mind he couldn’t help commenting on the present chaos at Westminster:

“Dirprwy Lywydd, when I was elected as leader of the Labour Party last week, I said that I wanted to be a beacon of hope in a darkening world. Today is not a moment for partisan remarks, but the skies around us have darkened even further in the days that have followed.

“A species of madness has descended on the Conservative Party, in which significant numbers of its MPs appear to believe that our country’s future is best secured by heaping a leadership contest onto the burning platform that Brexit has become. I really do believe that here, in a much newer and very different institution, things really are done differently and almost always that things are done better.”
– First Minister Designate, Mark Drakeford

He spoke of the need for a “kinder sort of politics” where old and discredited ways of doing things are cast aside. He held up the debate on the Human Transplantation Act 2013 as an example of that, with contributions motivated by wanting the best possible outcome. It’s now gone on to make a real difference to people’s lives.

He paid tribute to his former mentor Rhodri Morgan – to whom he was a special adviser. He first visited the Senedd chamber in that capacity while it was still under construction in the 2000s – “knocking up the new lean-to” as Rhodri described it.

He admitted the prospect of First Minister’s Questions didn’t appeal to him, remembering what it was like to prepare Rhodri Morgan for that and trying to figure out “what trouble the opposition would make” later in the day.

“Despite all of that meticulous preparation, how easily it could all go wrong. Like the Llywydd, I have not intention of writing any memoirs, but if I did, then the Tuesday when the BBC started reporting in the One O’Clock News, and with less than half an hour to go before FMQs, that a group of Welsh Government civil servants had been ‘discovered’, as the BBC put it, at a bonding session in a sauna in Llandovery remains seared in my memory.”
– First Minister Designate, Mark Drakeford

Under such circumstances, Rhodri Morgan would quip, “Tin hat on” and set off to the chamber – Mark dropping hints to family in the gallery as to what would make an ideal Christmas present. With that, he wished AMs a Merry Christmas and looked forward to the first session in 2019.

Depending on whether the official email has been caught up in the Queen’s spam filter, you would expect Mark Drakeford to be sworn in later today or tomorrow, with the new Cabinet likely to be announced tomorrow as well – though it’s already been confirmed Kirsty Williams (Lib Dem, Brecon & Radnor) will remain Education Secretary.

Full details as and when they emerge.