In another non-binding and largely symbolic vote, Plaid Cymru used their allocated time yesterday to debate the way forward on Brexit.

“This agreement….is a good sign that there is an emerging understanding in this place that we must face together the problems that are crowding around Wales and the Welsh economy that threatens a perfect storm. There can be no doubt that the many challenges facing in particular, for example, Welsh manufacturing, and not least the redundancies announced at Ford in Bridgend and at Schaeffler in Llanelli, either flow from—or, at the very least, are being exacerbated by—the continuing uncertainty around Brexit. The most immediate thing that we can do to lessen that uncertainty is to take the threat of ‘No Deal’ off the table.”
– Adam Price AM

If on March 30th the UK crashes out, Adam told the Senedd that we could expect a worsening of these trends with echoes of 2008 – though he also accepted that domestic-focused businesses are unlikely to be hit as hard. He welcomed the Welsh Government’s support for extending Article 50 but time was running out for the Westminster Labour party to press for it as well.

Shadow External Affairs Minister, Darren Millar AM (Con, Clwyd West), was disappointed the deal was voted down in London as it was an opportunity to put differences aside and “act in the national interest”. He didn’t think it was wise to rule out a “No Deal”.

“I would rather we left the EU with a deal….However, what I don’t think you can do is completely rule out the possibility of no deal, because if you do that, what you do is you give all your bargaining chips away to the EU and say to them, ‘No matter what you give us, we will take it because we are not going to rule out no deal.’ So, it’s not a good negotiating strategy.”
– Shadow External Affairs Minister, Darren Millar AM

Unsurprisingly, the Conservatives wouldn’t support the motion; it was more important for the devolved administrations to work with the UK Government and come up with a deal and orderly transition.

Mick Antoniw AM (Lab, Pontypridd) said it was “absolute rubbish” that the UK could simply fall back on World Trade Organisation rules – the UK would be the only country trading solely on that basis.

Mandy Jones AM (Ind, North Wales) said existing trade deals would be “grandfathered” and just require a UK signature, but Mick replied by saying it was a myth – there are lots of restrictions.

“I remember going across the road, on that secretive day when we had to put our mobile phone in a box so we couldn’t take photos of the UK Government’s own projections of the effects of Brexit. It was horrifying reading, even those ways of leaving the European Union that were controlled.”
– Rhun ap Iorwerth AM (Plaid, Ynys Môn)

“A ‘No deal’ Brexit is an unacceptable result, this is our stance as a party here and in Westminster. It would be the worst possible outcome and the United Kingdom Prime Minister has wasted two years repeating that, ‘No deal is better than a bad deal’ when she should have been developing a practical strategy and trying to engender support for it across parties.”
– Counsel General & Brexit Minister, Jeremy Miles (Lab, Neath)

The Brexit Minister confirmed that a request has been made by the First Minister for a Joint Ministerial Committee meeting “as a matter of urgency” and for an agreement that a “No Deal” should be taken off the table. He did have concerns that the Prime Minister hasn’t asked for an Article 50 extension since the deal was voted down.

In an extraordinary development, the Minister confirmed plenary business after FMQs next Tuesday (22nd January) has been rescheduled to focus on No Deal preparations, with statements due from individual Cabinet Ministers on the possible impact of a No Deal on devolved policy areas. 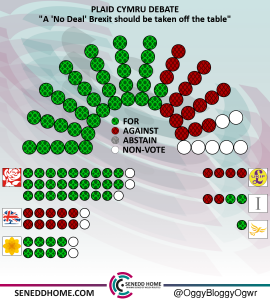