Yesterday, the Conservatives used their time during plenary to debate their plans for housing.

Shadow Housing Minister, David Melding AM (Con, South Wales Central), opened with a quote from the Home Builders Federation sayingWales was heading for a housing crisis unless urgent action was taken. The quote came from 2004.

“The need for a holistic and cohesive strategy to tackle this issue has never been clearer, and the need for a cross-party consensus has never been more needed. All of us in public life have been part of the problem. Now we must join together and build a policy to solve the crisis. This, Llywydd, is what today’s debate is all about. Today I urge all Members to support our motion, which puts on record that this Assembly recognises that we simply haven’t done enough and we need to do much more.”
– Shadow Housing Minister, David Melding AM

The UK Government has set a target of building 300,000 new homes a year and it was time for Wales to follow suit with at least 100,000 new homes over a 10-year period. Based on a report from Shelter, he would support programme of additional housebuilding backed by public borrowing – a rough calculation of which, based on English figures, was put at £190-270million a year for Wales.

Nick Ramsay AM (Con, Monmouth) said the shortage of housing was driving prices up to 6 times average salary and not enough was being done to bring empty houses back into use. Suzy Davies AM (Con, South Wales West) later suggested this could be done through Help to Buy as it currently favours large construction firms.

Mark Reckless AM (Con, South Wales East) spoke of the positives of Bristol overspill in south east Wales, such as higher salaries and tax take despite a reported 10%+ increase in houses prices in the region.

The gap is in social housing

Leanne Wood AM (Plaid, Rhondda) railed off a number of figures on housebuilding, but her key point was that the issue of supply isn’t in the private/market sector, but in social housing.

“Between 1997 and 2007, just 825 new units of social housing were built each year, and that only increases to 850 each year in the last 10 years. But the Public Policy Institute for Wales estimates that we need between 3,300 and 4,200 additional units of social housing every year, yet just 850 homes when we need over 4,000. That gap is absolutely staggering.”
– Leanne Wood AM

Vested interests need to be managed as too often the “need for more houses” is used to water down planning laws and railroad through inappropriate developments. The decision to cut back on social housing was, in effect, handing responsibility for providing shelter – a basic human right – to profit-seeking companies.

“The number of private houses being built has always stayed roughly similar—it’s gone up and down a little, but it’s been fairly similar. Because, let’s be honest, if you were a major house builder, why would you want to build surplus? If you build a surplus, house prices will come down; you’ll have empty properties. You want to keep demand high.”
– Mike Hedges AM (Lab, Swansea East)

Hefin David AM (Lab, Caerphilly) spoke of the partisan campaigning that often comes with major housing developments which made it difficult to have reasonable conversations on the issue. The wider problem, however, was the dominance of an oligopoly of as few as five major housebuilders who do as much as they can to meet demand and make profits but little to meet housing need – particularly in the northern Valleys.

Local Government & Housing Minister, Julie James (Lab, Swansea West) said that while there was a lot to agree with in the Tory white paper, there was disagreement on methodology.

“Unlike the UK Government, we’ve never lost sight of the need to support the most vulnerable and the most in need, and that’s why homes for social rent make up the biggest proportion of our 20,000 target. It’s also why we’ve taken action to end the right to buy, which has seen so many homes in all parts of Wales lost from the affordable housing sector. I won’t get into this again, but I have to say that I disagree with much of what was said on the Conservative benches about this.”
– Local Government & Housing Minister, Julie James

Recent changes to planning policy in Wales changed viability considerations in order to encourage smaller housebuilders and smaller developments – including self-build. An innovation programme is also seeing the first new modular housing being developed, while the government remains committed to bringing 5,000 empty homes back into use this term.

An amended motion, which essentially boiled down to saying the Welsh Government were doing a lot on all of the issues discussed, was passed by 30 votes to 21 with 3 abstentions. 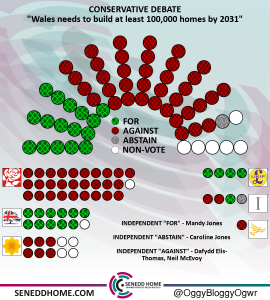 Public toilets set to be exempt from business rates