For the second week in succession, a proposed law from a Conservative AM has fallen at an early stage. This time it was the turn of Darren Millar AM (Con, Clwyd West) who won a ballot to introduce a Bill to protect the rights of older people.

Yesterday, he (unsuccessfully) sought the Senedd’s permission to start work on the Bill itself.

A proud track record, but more to do

Around one in four people living in Wales is over the age of 60 and while Wales was the first UK nation to introduce an Older People’s Commissioner and enshrine young people’s rights in law, Darren believes the time has come to do the put the rights of older people on a more formal footing.

“Many are frequent users of public services; they can be more dependent on the care of others and they may be—and often are—subject to age discrimination. Older people can be disproportionately impacted by the closure of facilities such as public conveniences, banks, libraries, post offices, hospitals or the withdrawal of public transport such as bus services. And at a time when more and more key services are only available online, more than half of adults, we must remember, over the age of 75, have never ever used the internet. “
– Darren Millar AM

Wales also has a high proportion of older carers and the highest prevalence of elder abuse in the UK (according to Action on Elder Abuse). Negative stereotypes of older people remain common.

Darren told the chamber that nearly all major charities associated with the elderly supported his proposed Bill, proving that there was some demand for it.

Challenges that we face

Helen Mary Jones AM (Plaid, Mid & West Wales) said Plaid would have a free vote on whether to support introducing a law – the main question being whether this proposed Bill would actually make a difference?

Janet Finch-Saunders AM (Con, Aberconwy) said that if such a Bill became law it would immediately improve the lives of over 800,000 people in Wales – using an example of a number of reports which have flagged up failures in residential care homes. It would ensure that when decisions are made – such as the closure of libraries, withdrawal of bus services or closure of public toilets – the needs of older people will be properly considered.

Some AMs were more sceptical:

“I suppose I need to declare an interest as well: as a grandmother twice over, I have to probably be in the category of an older person, and we all face that music in due course. I think some of the statistics that Darren Millar has produced are, of course, very sobering. The fact that 75,000 people feel lonely most of the time is a wake-up call for all of us. But I really do wonder how this legislation would address that.”
– Jenny Rathbone AM (Lab, Cardiff Central)

Support for the sentiment (but not for the Bill)

Deputy Minister for Health & Social Services, Julie Morgan (Lab, Cardiff North), agreed with the sentiments behind the Bill but didn’t agree with taking what she described as a “piecemeal” approach to legislation.

Older people’s rights were already enshrined in law via the Human Rights Act 1998, but in light of the potential for this Act to be weakened or repealed after Brexit, the Welsh Government have commissioned work to see how these rights can be retained in Welsh law:

For the record, Bethan Sayed AM (Plaid, South Wales West) and Jenny Rathbone AM abstained. 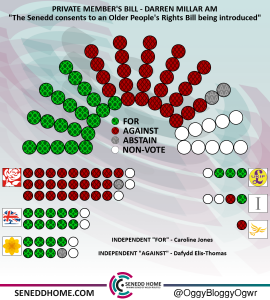