Solidarity with the Kurdish people

Delyth Jewell AM (Plaid, South Wales East) went straight to the point, saying there was a life at stake “not 15 miles away from us”. Imam Sis’s hunger strike was nearing 100 days, but Leyla Güven is close to death. Regardless of devolved powers, it was important for the Senedd to acknowledge the part that a Newport resident was playing in promoting human rights abroad:

“I’ve written to Leyla (Güven) and to the secretariat for the European Committee for the Prevention of Torture, and my letter called on them to review their investigation….Unfortunately, they do not have the necessary powers to ensure Mr Öcalan’s human rights are enforced, which is why those campaigning for him have resorted to extreme measures to try to secure (sic) that his legal rights are honoured.”
– Delyth Jewell AM

Bethan Sayed AM (Plaid, South Wales West) contested claims the PKK were terrorists; they were, in fact, used as a boogeyman to justify Turkey’s poor human rights record. Kurdish politicians have been harassed and innocent people imprisoned, when all they were doing – after centuries of conflict – was looking for somewhere to call “home”.

Leanne Wood AM (Plaid, Rhondda) said it was hard to describe how far Imam Sis has deteriorated, but she remembers him as a committed anti-racism campaigner. International pressure on Turkey needs to increase and the Welsh should have sympathy with “a people subjected to all kinds of denial, annihilation and assimilation policies.”

There was support from the Labour backbenches. Jenny Rathbone AM (Lab, Cardiff Central) said we all had to reflect on why people were desperate to get their cause heard. Mick Antoniw AM (Lab, Pontypridd) said there was plenty of blame to go around:

“…the plight of the Kurdish people is one we should be ashamed of, because over decades….our governments have been complicit in turning a blind eye to the abuse of basic human rights, just as we have of the Palestinians. It seems that we are forever to put our economic and vested interests ahead of the basic rights of the Kurdish people and the undemocratic and increasingly oppressive actions of the Turkish (Iranian, Syrian and Iraqi) Government…. It seems that yet again oil speaks louder than human rights.”
– Mick Antoniw AM

A good use of the Assembly’s time?

The Conservatives opposed the motion from the outset. Shadow International Affairs Minister, Darren Millar AM (Con, Clwyd West), said many would find it distasteful for AMs to debate a motion which sympathises with a convicted terrorist. He recognised the sincerity behind the hunger strike, and Turkey’s actions against the Kurds weren’t without question, but the PKK aren’t cuddly freedom fighters:

“….the PKK has been accused of being involved in the narcotics trade, child smuggling, tax evasion and counterfeit-money production. As recently as 2016, Human Rights Watch alleged that groups affiliated to the PKK have recruited boys and girls to be soldiers in their cause.”
– Shadow International Affairs Minister, Darren Millar AM

Mohammad Asghar AM (Con, South Wales East) said it would open Pandora’s Box and set a precedent for similar causes; citing Northern Ireland, he said things can change and Kurds, Turks and other nationalities in the region can learn to live together peacefully.

Öcalan “isn’t in total isolation, has access to counsel”

Replying on behalf of the government, Minister for International Affairs & Welsh Language, Eluned Morgan (Lab, Mid & West Wales), said she condemns all forms of persecution and violence, but in this case:

“I’ve spoken to the Turkish ambassador (to the UK)….where I raised the concerns of Welsh citizens about the worsening condition of Imam Sis and….his hunger strike. The ambassador asserted that in March 2018, the European Committee for the Prevention of Torture published a report that highlighted that the conditions under which Öcalan was being held had materially improved since their previous visit in 2013. He also suggested Öcalan’s brother had been to visit him in January this year, and as far as he knows – and I think it’s probably worth checking this – Öcalan has access to lawyers.”
– Minister for International Affairs & Welsh Language, Eluned Morgan

The government expects Turkey to ensure prisoners’ rights were upheld, but the Welsh Government has no authority to issue statements on foreign policy. While Ministers couldn’t support the motion, Labour backbenchers were given a free vote.

Former First Minister, Carwyn Jones AM (Lab, Bridgend), and most of the ministers and deputy ministers abstained – the exception being Deputy Economy Minister, Lee Waters (Lab, Llanelli), who voted in favour. UKIP’s David Rowlands also broke ranks and supported the motion (whether by accident or not, I don’t know). 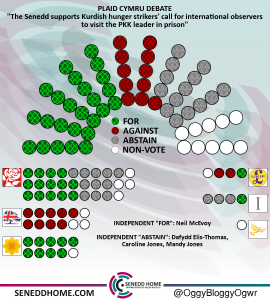