Yes, AMs held another debate on Brexit – I think the fourth in as many months. It was tempting to skip it but I wouldn’t for a moment suggest something as vulgar as the Senedd pissing into the wind.

The big difference this time was that the debate was held concurrently with the Scottish Parliament.

Counsel General & Brexit Minister, Jeremy Miles (Lab, Neath), warned we were heading for a “cliff edge”, with the Prime Minister keen to placate hardliners in the Tory party. The UK Government were ill-prepared for what was coming:

“By their own assessment, only two-thirds of the UK Government’s most critical ‘No Deal’ projects are on track. Fewer than a quarter of the businesses that currently export to the EU have applied for the documentation they will need to continue to do so in a ‘No Deal’ situation. On trade, the trade Secretary’s assurances that all existing EU trade agreements would be in place by 29th March lie in tatters.”
– Counsel General & Brexit Minister, Jeremy Miles

Mick Antoniw AM (Lab, Pontypridd) believed the only option facing Westminster was an Article 50 extension. While the “solidarity” between Wales and Scotland was largely symbolic, it was “a bond of unity that has grown out of common interest”.

Carwyn Jones AM (Lab, Bridgend) compared the situation to lemmings – their migratory instinct is so strong they’ll jump off a cliff thinking there was a clear path ahead. The Leave campaign didn’t campaign on the basis of a “No Deal”, while they also argued a free trade deal would be the easiest in history – all proven false.

David Rees AM (Lab, Aberavon) warned of the possible damage WTO rules would have on Welsh agriculture; while Irish beef would face tariffs, they would be trading on the same basis as the US, Argentina and Brazil.

“….I had been in Brussels and in Paris last week holding St David’s Day events. I was taken aback by the extent to which people who are friends of the UK said the Prime Minister’s decision to vote for the Brady amendment had punctured whatever credibility she still had. Here was a Prime Minister who struck a deal with the EU and then was prepared to vote against the deal that she herself had struck.”
– First Minister, Mark Drakeford (Lab, Cardiff West)

For the motion; for a “People’s Vote”

As the motion was jointly tabled by both the government and Plaid Cymru, Adam Price AM (Plaid, Carms. E & Dinefwr) said it would have his party’s backing. However, Plaid tabled an amendment calling for a second referendum. If Article 50 is extended the EU will expect a reason and there was no better reason than a “People’s Vote”.

Lynne Neagle AM (Lab, Torfaen) spoke in favour of Plaid’s amendment; she had been calling for a second referendum for months and had to vote in favour as a matter of principle.

The only fresh take on this came from Delyth Jewell AM (Plaid, South Wales East), who at least tried to channel a sense of urgency. She spoke of the “opportunity cost” – costs resulting from actions which haven’t been taken due to Brexit:

“….of prevarication; of promises not delivered; all the reams of legislation; the funding we might have raised; operations that haven’t happened; the drugs we haven’t been able to purchase; the lives of European friends who might have lived among us; the kinship, friendships and relationships we might have developed with people who’ve either left these islands or have chosen never to come; the could and would and should; and the might-have-beens that haven’t been, because Brexit has taken all our attention.”
– Delyth Jewell AM

Delyth added that the question had to go back to the people to put a line under it and to enable politicians to address the underlying issues that led to the 2016 vote, such as economic stagnation.

David Melding AM (Con, South Wales Central) accepted the authority of the 2016 referendum – which shouldn’t be overturned. The best option on the table was the Prime Minister’s deal:

“Mrs May’s deal is enough of a Brexit to make it….something that can shape our future trading policy to some extent, however limited, and buttress an ongoing relationship with the EU. On that basis, I fully support it.

“If I quickly look at the clearest alternatives, a Hard Brexit based on WTO rules and possibly then a free trade agreement with the EU, either initially as a ‘No Deal’ Brexit as some sort of managed break, I do accept is coherent. But the shock therapy and the risk attached to it would be very considerable, and it would create real jeopardy for the poorest in society.”
– David Melding AM

Mark Reckless AM (Con, South Wales East) implied that rejecting a “No Deal” outright would play into the EU’s hands and let them dictate the terms of the UK’s withdrawal.

Plaid Cymru’s amendment calling for a second referendum was rejected by 11 votes to 39. Lynne Neagle AM and the Education Minister, Kirsty Williams (Lib Dem, Brecon & Radnor), voted in favour from the government benches. 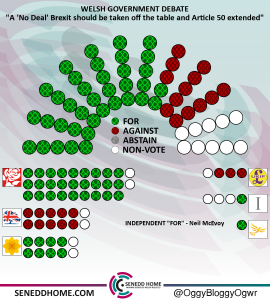