“The evidence was so damning”

Shadow Rural Affairs Minister, Andrew RT Davies AM (Con, South Wales Central), said that when NRW was first founded, some leading figures questioned it; Jon Owen Jones – the chief of the Forestry Commission at the time – said the business case didn’t stand up.

He ran through a catalogue of issues at the body, but focused on the views of staff who were demoralised and highly critical of poor leadership:

“In 2016, the organisation actually stopped printing the outcomes of staff surveys because the evidence was so damning. We as politicians obviously owe it to the staff to make sure that their voice is heard and, ultimately, that the improvements and the safeguards are put in place. And as recently as 2018, in a major consultation with the staff, NRW did not believe that the reorganisation that was going on in the staffing structures would provide a basis for taking the organisation forward.”
– Shadow Rural Affairs Minister, Andrew RT Davies AM

He said he would be more than happy to see NRW flourishing, but called for a separation between the commercial element of the body and the regulatory element.

Mohammad Asghar AM (Con, South Wales East) said incompetent leadership and the loss of experienced commercial expertise has led to NRW costing the Welsh taxpayer millions and put the future of the Welsh forestry industry at risk. Mark Reckless AM (Con, South Wales East) saw the development of a Wales-only rural support policy after Brexit as an opportunity to help farmers cede land for forestry creation.

“I think it’s been some of the other more general issues that have, perhaps, undermined our faith that they were really moving on, and the issues relating to forestry, in particular, have been grave because they’ve repeated. Let’s not forget that this wasn’t a one-off; it happened again. And I do think the Welsh Government has to take more responsibility.”
– David Melding AM (Con, South Wales Central)

You can’t say the whole organisation is flawed

Llyr Gruffydd AM (Plaid, North Wales) tabled amendments which criticised a systemic failure and didn’t believe that the whole organisation was flawed. It was hard enough for NRW to manage when they’ve faced a 35% budget cut since it was established. He did, however, agree that questions should be asked about the organisations’ independence:

“Certainly, whatever your view as to whether the decision to ban pheasant shooting was correct or not, I think that the process, when it was unanimously agreed not to introduce a prohibition in the first place, and then, as we’ve discussed here in the past, the Minister at the time wrote a letter and expressed a clear view and in no time at all the view had changed—in my view, that does raise fundamental questions. But, simultaneously, of course, the Government was hiding behind NRW on the issue of the nuclear mud dumped off the Welsh coast.”
– Llyr Gruffydd AM

Neil McEvoy AM (Ind, South Wales Central) said he would support the Conservative motion, based on the flawed way – in his eyes – NRW approached the “nuclear mud” issue (they couldn’t give him basic answers) as well as flood protection work on the Roath brook in Cardiff. He also accused NRW of beaching data protection by briefing another (unnamed) AM about details of a phone conversation.

“….we believe the period of uncertainty proposed by the opposition is absolutely the last thing the staff of NRW need. Opposition parties call for an independent inquiry, for more discussions to take place. What we want is that change to happen now. The Senedd has both the remit and ability to provide robust, independent scrutiny of NRW’s progress. I welcome and commend the reports produced by the Assembly committees. Their recommendations have been accepted and are being implemented.”
– Energy, Environment & Rural Affairs Minister, Lesley Griffiths AM (Lab, Wrexham)

The Minister went on to say that having a single organisation responsible for natural resources provided operational efficiencies and a threat to break it up would undermine its cross-cutting work on issues like climate change, biodiversity and flood protection. 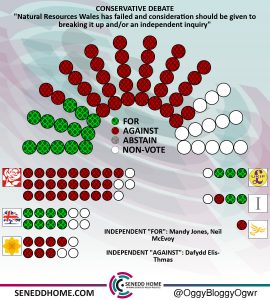