Having been trailed on social media for a week, yesterday Bethan Sayed AM (Plaid, South Wales West) used her short debate to discuss whether the Oath of Office for AMs should change – from swearing allegiance to the monarch (and their successors) to pledging allegiance to the people of Wales.

Believing in the Oath of Office is crucial

Bethan said it was crucial that from the very start of their term in office, elected representatives honour their beliefs and, subsequently, that the people who elected them believe what they say. From their very first act, AMs may be forced to pledge allegiance to something they simply don’t believe in.

“This is what people say at the moment: ‘I, (name of the AM), pledge that I will be faithful to Her Majesty Queen Elizabeth II, her heirs and successors, in accordance with the law. So help me God.’

“Well, I don’t believe in that statement. I am a republican. I am very proud of that fact. I do understand that not everyone is a republican and, of course, they could disagree. I respect that. That is the true meaning of democracy. But that respect should work both ways.”
– Bethan Sayed AM

Forcing people to swear allegiance to an institution they don’t believe in in order to take their seats showed that the UK places a higher value on outdated traditions, giving undue deference to an institution that lacks any democratic legitimacy. As the row over the Severn Crossing name change proves, people in Wales aren’t “prepared to blithely accept something simply because it has a royal proclamation attached”.

Replying on behalf of the Assembly Commission, the Llywydd, Elin Jones (Plaid, Ceredigion), struck a cautious tone and suggested change would be very slow, but possible.

She said the Oath of Office was currently non-devolved but could be devolved to the Senedd either via an Order or via a Bill at Westminster which would require the approval of both Houses of Parliament. Afterwards, it would require a Bill in the Senedd to become law.

“My advice, therefore, to any Member who wishes to implement a change of this kind or any other change on any issue, is to hold positive discussions among Members and the people of Wales, and across parties, of course, and to garner the support of a majority. Everything is possible, but only through garnering support.”
– Llywydd, Elin Jones

On behalf of the Welsh Government, Deputy Minister & Chief Whip, Jane Hutt (Lab, Vale of Glamorgan), said that while the Oath was an important a memorable part of becoming an AM, it wasn’t really a matter for the government – all but agreeing with the Llywydd’s advice. 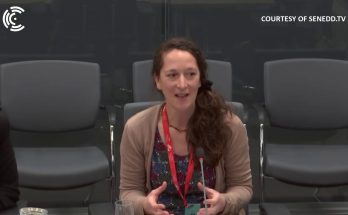