In May, the Welsh Government tabled regulations which would expand the obligations primary care providers (GPs, dentists, pharmacists etc.) have towards Welsh-speaking patients.

These were tabled under the “negative procedure”, meaning they came into effect automatically – in this case on 30th May 2019 – unless there was a vote to revoke them.

The Culture Committee complained they didn’t have adequate time – 21 days, including the half-term recess – to properly scrutinise the regulations and “called them in”. Following a short inquiry, they published a report last week (pdf). Whilst not specifically recommending the regulations be revoked, they concluded they should be revised with proper consultation.

“No rights, no expectations, no change”

Dr Dai Lloyd AM (Plaid, South Wales West) said it was crucial that some vulnerable people – particularly those with dementia – are able to access services in their first language. The regulations were nothing more than window dressing which would see a few additional Welsh language signs, but not much else.

“….we are here today looking at regulations that don’t provide any statutory rights, or even half a statutory expectation, of receiving face-to-face services through Welsh for patients. At best, over time, we will see a few new Welsh signs….There is nothing here: no rights, no expectations, and no change.”
– Dr Dai Lloyd AM

He added that the Health Minister refused to provide additional evidence or enter into discussions on a way forward. The explanatory memorandum wasn’t translated into Welsh despite it being only five pages long.

Suzy Davies AM (Con, South Wales West) said the Conservatives would support revoking the regulations, mainly due to the scrutiny role of the Senedd being ignored. The regulations themselves are easy to adhere to and it was “embarrassing” they were needed at all.

Chair of the Culture Committee, Bethan Sayed AM (Plaid, South Wales West), told AMs the Committee were reassured several times they would have more than 21 days to scrutinise the regulations, but they were tabled without warning and with the minimum available time to scrutinise them.

While also criticising the length of time available for scrutiny, Caroline Jones AM (BXP, South Wales West) said it was important to get a balance between meeting needs of patients and not reinforcing perceptions that working in the Welsh NHS required Welsh-speaking skills.

“But the real problem is that you’re setting a level of standards without scrutiny here….Primary healthcare services are the most direct ones that we receive, and where we would really want to see effective Welsh language rights being championed.”
– David Melding AM (Con, South Wales Central)

Chair of the Constitutional Affairs Committee, Mick Antoniw AM (Lab, Pontypridd), said there were very real issues raised by the government’s handling of these regulations and a “warning shot” was needed:

“There are those of us who fell short of supporting annulment, but primarily because of the damage we felt it might do, or the implications of not proceeding with regulations that seek to advance the….Welsh language. But that should not mean that there isn’t a warning shot across the bows of Government, that if procedures are not properly followed, if there is not a proper opportunity for scrutiny, then the issue of annulment is one that is taken seriously….by our committee structure.”
– Chair of the Constitutional Affairs Committee, Mick Antoniw AM

Health Minister, Vaughan Gething (Lab, Cardiff S. & Penarth), took all the points on board and expressed a “genuine and sincere regret” that a Welsh version of the explanatory memorandum wasn’t tabled. As the regulations have already come into effect, revoking them would mean starting the process all over again.

“I do believe that these duties are a significant step forward in promoting and supporting Welsh language services in primary care. And I am pleased that representative bodies of independent primary care providers, despite raising some challenges, have agreed on the approach that we’re taking.”
– Health Minister, Vaughan Gething 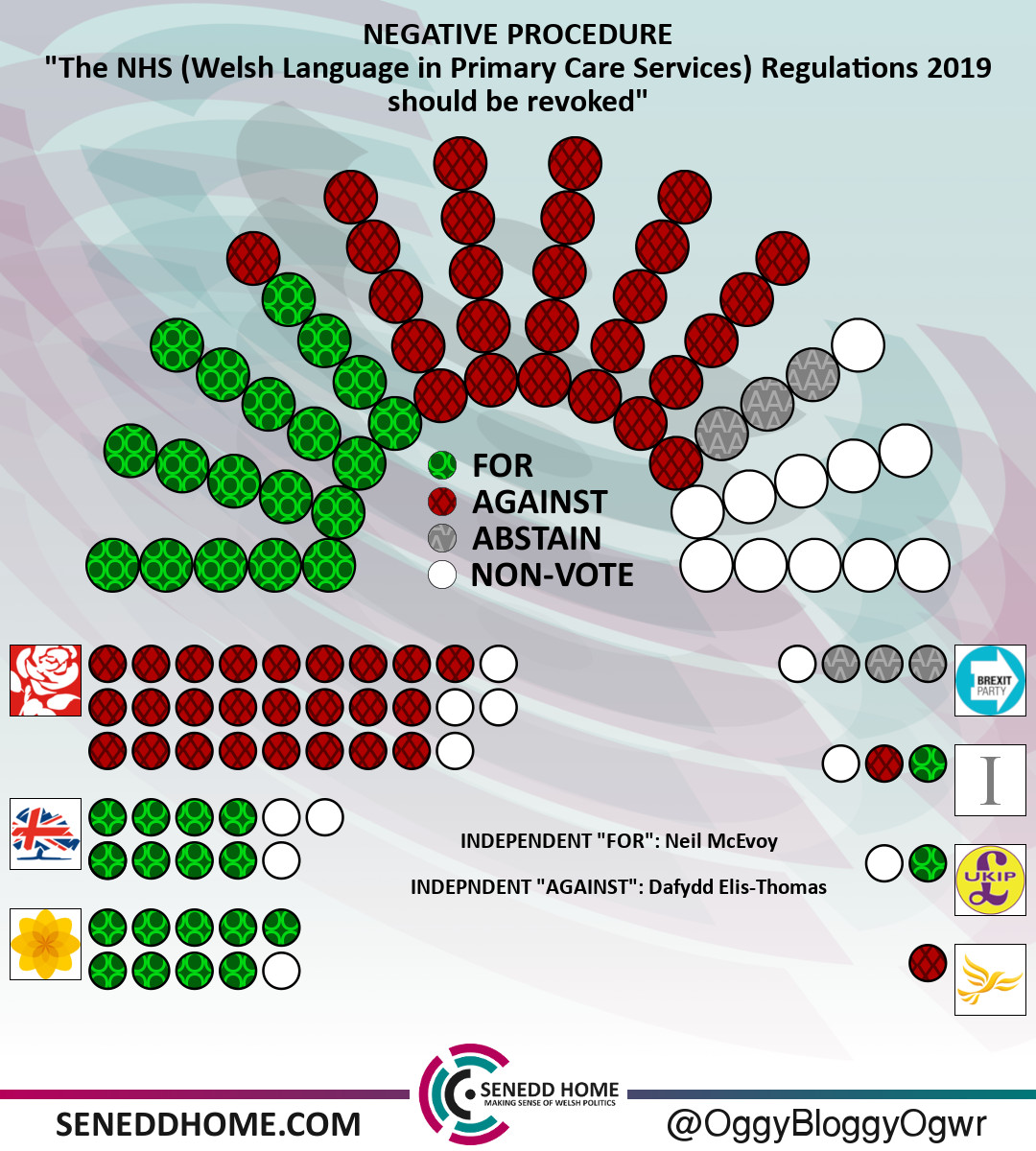