Shadow Communities Minister, Mark Isherwood AM (Con, North Wales), said people born with ASD see the world differently and do so for their entire lives. While he acknowledged some improvements to autism services, a review found a postcode lottery and the Welsh Government hadn’t made any commitments towards implementing the findings of the review. Some of the issues can be easily fixed; for example, better communication training.

“Many regional autism services do not comply with all the national standards. Presiding Officer, I still believe that we need statutory backing to protect the rights of autistic people and raise awareness of a complex condition. The Welsh Government must implement the recommendation contained in the plan as soon as it is practical.”
– Mohammad Asghar AM (Con, South Wales East)

Leader of the Opposition, Paul Davies AM (Con, Preseli Pembs.), said his rejected Autism Bill has at least put autism towards the top of the agenda in the Senedd. Some of the key problems were demand for assessments, access to funding for third sector organisations supporting ASD people, as well as uncertainty over the continuation of services beyond the current action plan.

Plaid Cymru supported measures to ensure neurodivergence (which has a wider net than ASD) should be a protected characteristic. Helen Mary Jones AM (Plaid, Mid & West Wales) said that some neurodiverse people are protected by disability laws, while others aren’t. Some people may also keep their neurodiversity a secret so they’re not discriminated against.

“The Equality Act 2010 requires proof that a behaviour or circumstance would discriminate against a typical person with that condition, and that’s difficult to enforce for neurodiversity as each condition affects an individual in a unique way. Labelling something as learning difficulties….is not helpful…and many neurodivergent workers, for example, do not struggle to acquire new skills or under new concepts. Furthermore, there is no duty to make reasonable adjustments if the employer did not know or could not have reasonably been expected to know that a person was disabled within the meaning of the Act.”
– Leanne Wood AM (Plaid, Rhondda)

Government has to take notice

Alun Davies AM (Lab, Blaenau Gwent) has been on the government’s side by voting down the Autism Bill, but that didn’t mean that there weren’t problems with autism services. His casework has numerous examples of long waiting times for education referrals or even responses from the relevant local government departments.

Jenny Rathbone AM (Lab, Cardiff Central) struck a more positive tone and noted lots of progress in her area, but called for more child-friendly autism testing.

A few AMs said their relatives had been diagnosed with ASD. Hefin David AM’s (Lab, Caerphilly) daughter was diagnosed in February this year. He was disappointed by the politicisation of the topic, quoting abusive comments about AMs who voted against the Autism Bill posted on the National Autistic Society’s Facebook page. He believed the organisation hasn’t done enough to present a strong case for a law.

“The integrated autism service is funded to at least 2021. I’ve made that decision with a risk against future budgets, and during that time we’ll continue to support and monitor its development. I will be in a position to consider future funding once we do have some clarity from the UK Government on our settlement for 2021 and beyond.”
– Health Minister, Vaughan Gething

The Minister confirmed that a draft code of practice for autism is due to be put out for consultation by the end of 2019. 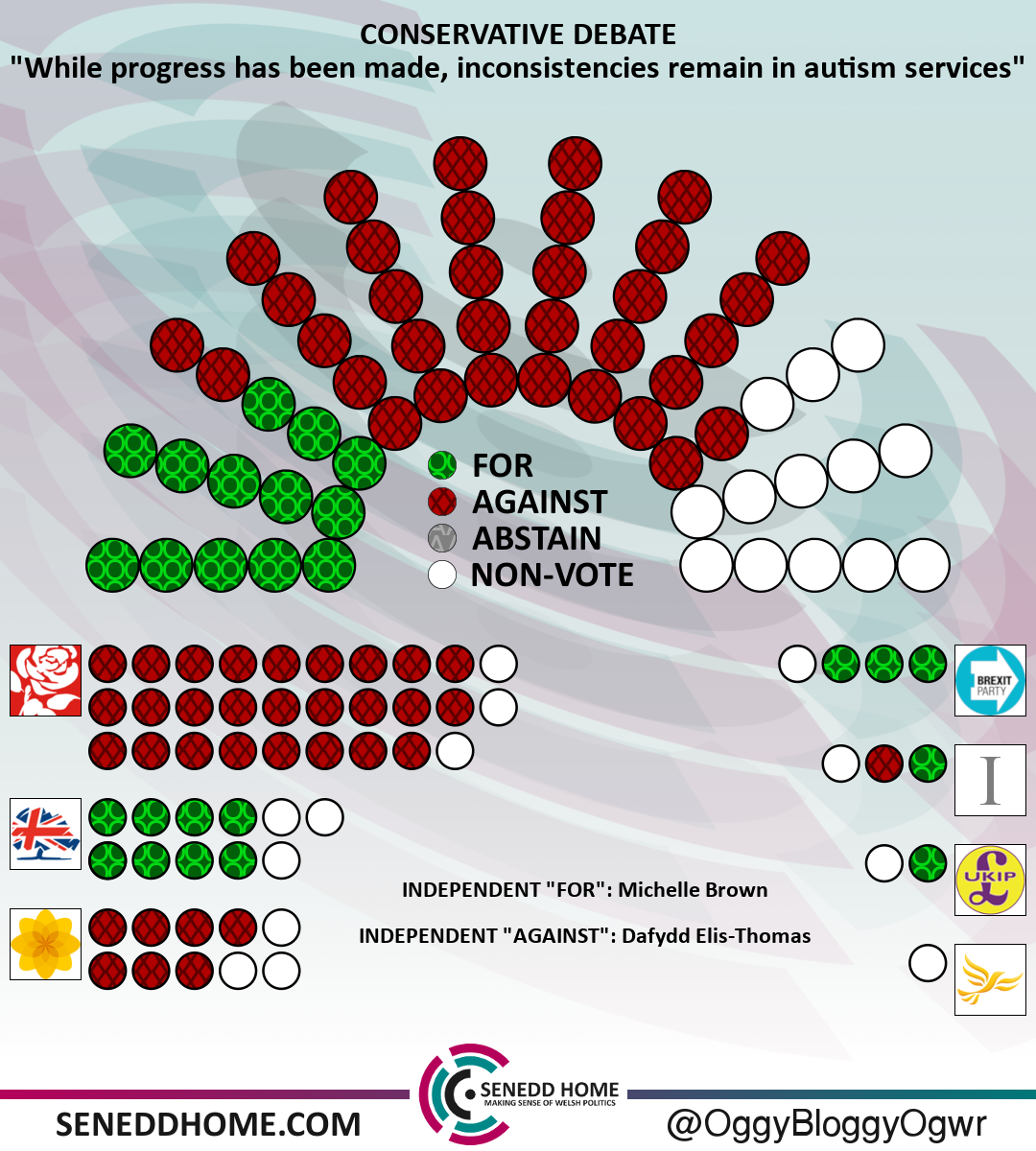