Shadow Health Minister, Angela Burns AM (Con, Carms. W. & S. Pembs.), outlined the stark figures facing Wales on sight loss (mentioned in the motion), adding that sight loss costs the Welsh economy £268million a year – while the wider cost including health and wellbeing was as much as £1billion. Of course, beyond the money there’s a deeply personal impact.

While treatments for cataracts and glaucoma have improved, clinics have effectively become victims of their own success:

“A government initiative….in the fourth Assembly concerning glaucoma was very successful but led to extra pressure being placed on clinics. And I’ve heard it’s not unusual for patients to be left waiting over four hours when attending their appointments. And it’s not just the waiting time for appointments that were raised, but cancellation of appointments. A freedom of information request to Betsi Cadwaladr highlighted that, over the last five years, that health board has cancelled close to 40,000 ophthalmology appointments; 7,900-odd were in the last financial year.”
– Shadow Health Minister, Angela Burns AM

Helen Mary Jones AM (Plaid, Mid & West Wales) said members of her own family have had experience of long waiting times for ophthalmology clinics dating back to the 1990s. Sight loss can seriously impact a person’s quality of life and dignity and there was a need for common sense too – sending appointment notices to people with sight problems which aren’t accessible to them will make issues surrounding missed appointments worse.

“Last October, the Wales Audit Office reported that NHS Wales follow-up waiting lists have increased substantially with ophthalmology the second-worst of all disciplines. In April, the Welsh Government published the first health board performance data against the new eye care measures for NHS out-patients….the April data showed that not a single health board is yet meeting the new Welsh Government targets.”
– Mark Isherwood AM (Con, North Wales)

Janet Finch-Saunders AM (Con, Aberconwy) raised the impact of staff shortages and an over-reliance on locum doctors to fill vacancies in ophthalmology, while Jenny Rathbone AM (Lab, Cardiff Central) called for direct referrals from high street opticians to specialists – not via a GP.

Bethan Sayed AM (Plaid, South Wales West) revealed how some ophthalmology services have been outsourced to private companies, with a company in Preston managing appointments in the Cwm Taf health board.

Not good enough, but improving

“There are people in Wales waiting too long for their initial treatment, and I recognise that is not good enough. However, despite increases in the number of people needing our services, we have seen significant improvements in referral-to-treatment times over recent years. At the end of March 2019, there were 218 people waiting longer than 36 weeks for their first appointment, and that’s the best position since March 2012 and a 93% improvement since the low point of March 2015….”
– Health Minister, Vaughan Gething (Lab, Cardiff S. & Penarth)

The Minister went on to say that the new targets are much harder to “massage” and are more honest, while he openly acknowledged that private companies were used to address long waiting lists, saying that if the NHS didn’t make use of resources outside the NHS, waiting times might be longer.

I’m assuming Plaid Cymru voted against the wording of the motion, which was amended by the Welsh Government to be a bit more positive than it originally was. 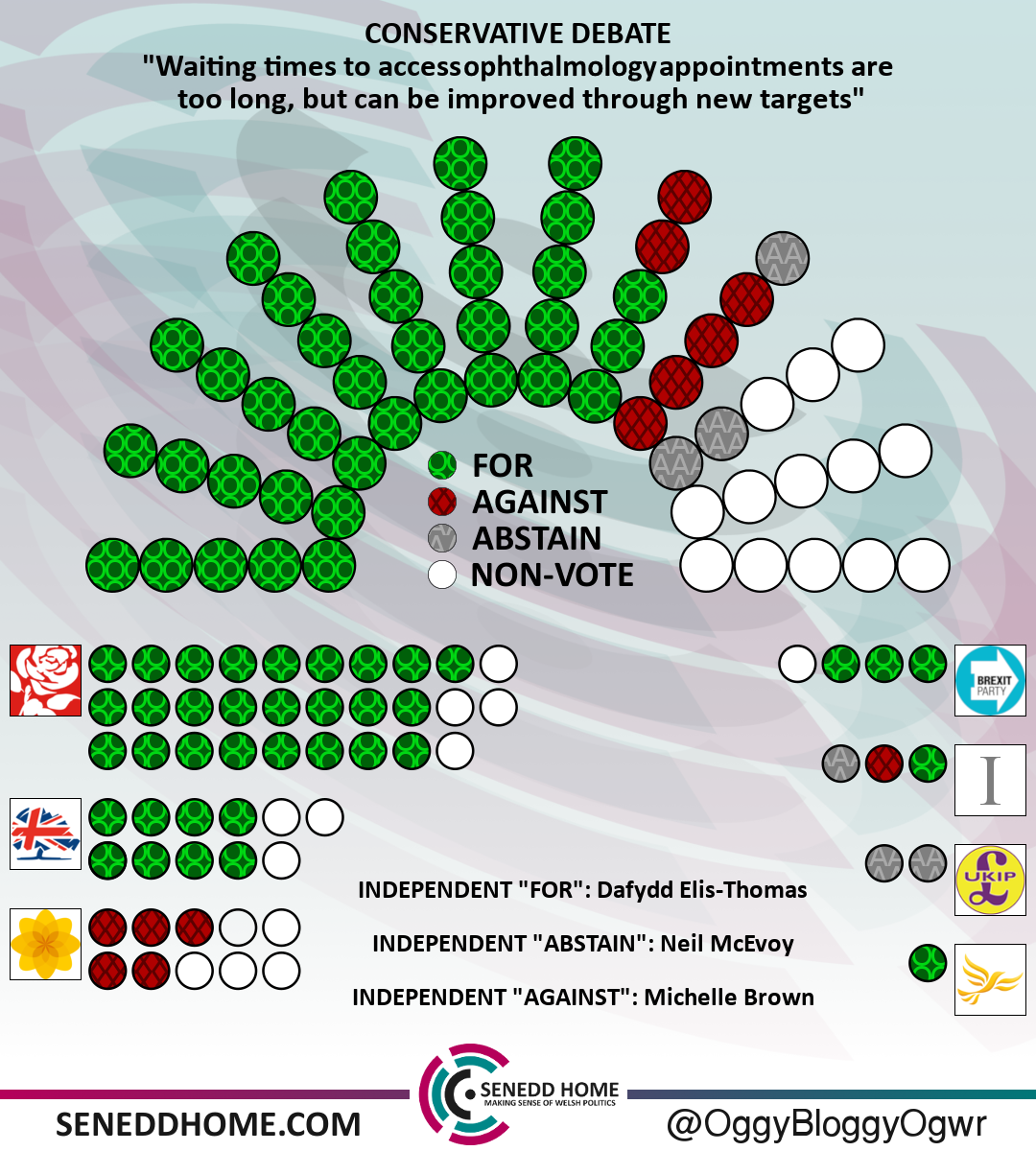