Adam Price AM (Plaid, Carms. E. & Dinefwr) said that while the powers available to the Senedd have increased, when those powers can’t be used effectively it results in “the worst of all worlds”. A Finance Committee of 6 people cannot effectively scrutinise £2billion worth of taxation powers. Also, once officeholders are discounted, Wales has 44AMs, the Scottish Parliament has 113MSPs and the UK House of Commons has 522MPs.

“We are the only nation in the world….where the council chamber of the capital city has more members than the national Parliament. The average size of national Parliaments for countries like ours, with between 1 million and 6 million citizens, is around 140 Members. Indeed, if you applied the famous cube root rule….that the largest legislative body of a national legislature tends to be the cube root of the population….then the Senedd would have around 140 Members.”
– Adam Price AM

Rhun ap Iorwerth AM (Plaid, Ynys Môn) called for the Senedd to demonstrate “courage” by taking this argument out to people in order to improve scrutiny.

In the five months Delyth Jewell AM (Plaid, South Wales East) has spent in the Senedd, she’s seen for herself how limited AMs are in their ability to scrutinise the government due to the number of different roles AMs have to play. Scrutiny of legislation and regulations was often dependant on backbench AMs with huge time constraints and there was no “safety net” of a revising chamber.

Speaking in her capacity as Chief Whip, Jane Hutt (Lab, Vale of Glamorgan), said Labour’s position was that more AMs were needed but there was disagreement over electoral reform. No changes should be introduced without a manifesto mandate.

Hefin David AM (Lab, Pontypridd) was persuaded by the need for single transferrable vote from his experiences at the 2016 election, where he saw how the current election system creates two tiers of AMs. He would prefer the electoral system change before there are any changes to the number of AMs.

“The majority of Assembly Members here work exceptionally hard and diligently….But, we are underpowered, not in effort but in simple numbers. We can say this confidently in light of comparisons with other regional Governments and Assemblies across Europe and the wider world. I say this confidently as a former member of the UK Parliament too, who has served as a backbencher and a Minister, a parliamentary aide, a Committee Chair, and more in Westminster.”
– Huw Irranca-Davies AM (Lab, Ogmore)

Mick Antoniw AM (Lab, Pontypridd) stressed the importance of “carrying people with you” when making major constitutional changes. While there was general agreement on a need for more AMs, there were “half a dozen different ideas” on what that would look like and how they should be elected.

Alun Davies AM (Lab, Blaenau Gwent) wanted electoral reforms that provide “equality of membership” instead of the divide between constituency and regional list members. He believed Plaid should withdraw the motion as it would cause division and there instead had to be a complete consensus.

Mark Reckless AM (BXP, South Wales East) was one of the few dissenting voices, saying there was no public appetite for more politicians. He hinted his party would be willing to look at this issue again once the number of Welsh MPs is reduced to 29 and MEPs lose their posts after Brexit – a net loss of 15 politicians.

Leader of the Opposition, Paul Davies AM (Con, Preseli Pembs.), agreed that the increased workload has strained the Senedd’s resources, but the people have to be consulted properly before there’s any move to increase the number of AMs. The Tory position was that any increase in AMs had to be funded by a decrease in politicians elsewhere.

On behalf of the Assembly Commission, the Llywydd, Elin Jones (Plaid, Ceredigion), believed there needs to be common ground on an electoral system which can win a supermajority of support before anything can change – but it was becoming increasingly impossible to argue against change.

“Our powers continue to increase, as we’ve heard: on taxation and on Brexit. The commission on justice is also expected to report in the autumn. With the case in favour of increasing the Assembly’s powers in that area also increasing, there’s a real possibility that we need to establish a justice committee to scrutinise the resulting work.

“That is a likely flavour of what is to come in future – more responsibilities, more expectation to scrutinise, but the same number of Members and hours in the day. But there is a better way that could be chosen that is more representational.”
– Llywydd, Elin Jones

For the record, the solitary Plaid vote against the amended version of the motion came from Helen Mary Jones AM (Plaid, Mid & West Wales). 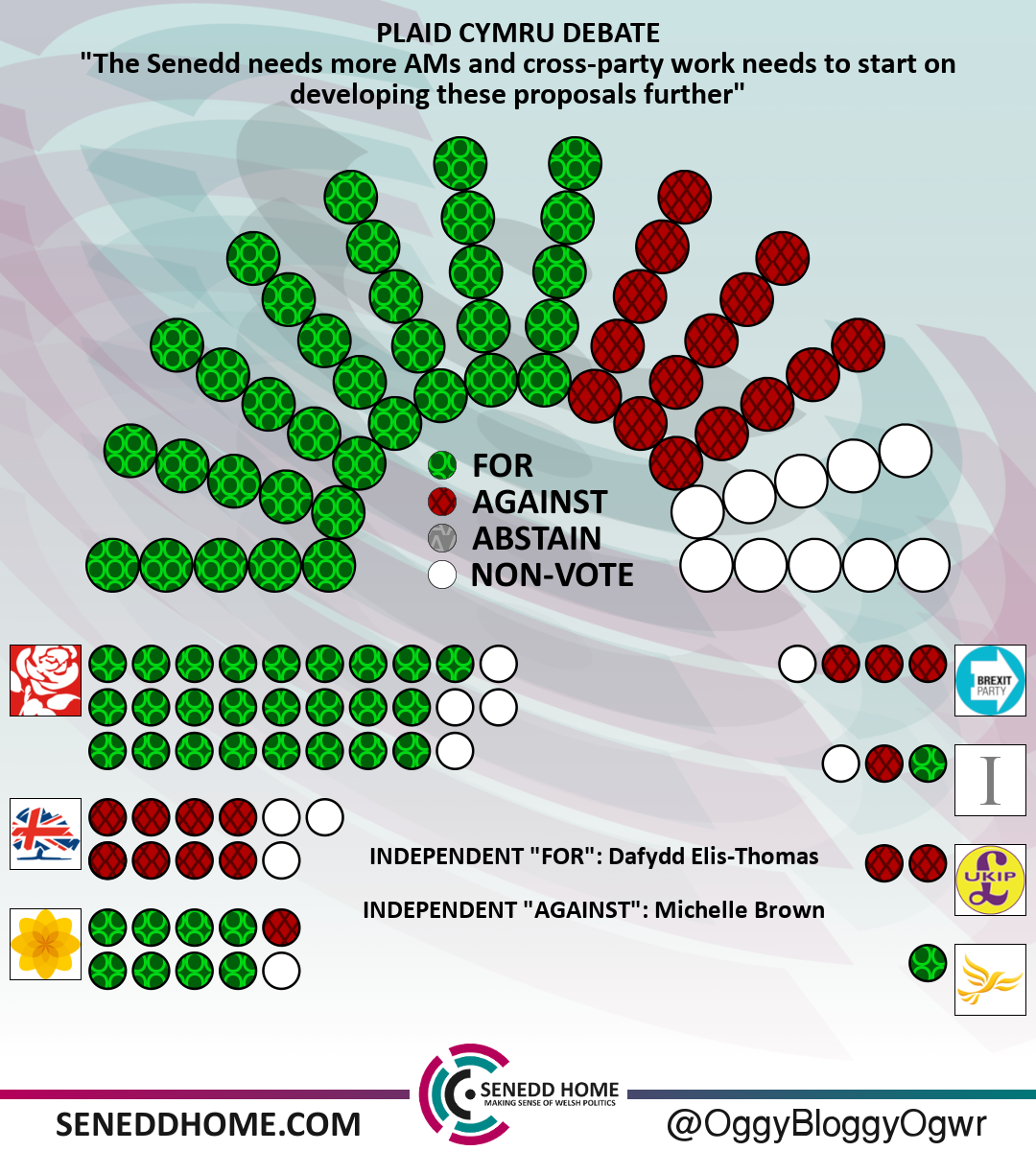