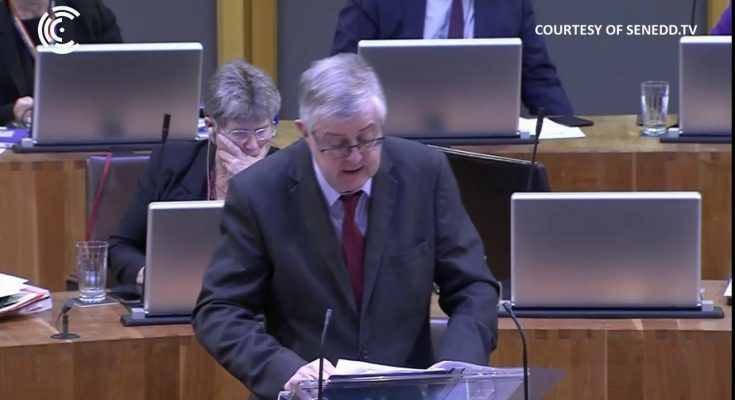 Earlier this week I summarised a new Welsh Government report outlining their desired reforms to the Union, as well as a brief assessment of its contents.

Yesterday afternoon, AMs had a chance to offer their opinions.

The First Minister ran through the key propositions in the report, adding that he told Boris Johnson that the Union was under greater threat than ever before, though the response to that has been “just silence”.

“We want to stimulate an urgent debate, but we do not claim to have all the answers. So what we have put forward is a set of propositions, and we want the UK Government, and of course others, to engage with them. It is the proper purpose of politics to argue out competing propositions and different views of our futures. In this document, we say, ‘Here is our version of how that future should be saved.’ To others here in Wales and in other parts of the United Kingdom, we say, ‘Please let that debate begin.'”
– First Minister, Mark Drakeford (Lab, Cardiff West)

Leader of the Opposition, Paul Davies AM (Con, Preseli Pembs.), said it was right to recognise that devolution was a fundamental part of the UK’s constitution. There were a “wealth of discussions” to be had on how the UK should function after Brexit and even offered his support for a needs-based funding formula.

Nonetheless, people are likely to be more concerned about the quality of public services – though he wasn’t opposed to some form of constitutional convention to set out a vision for the UK without compromising the Union itself.

Adam Price AM (Plaid, Carms. E. & Dinefwr) said there was much to welcome in the report even if Plaid disagreed with the final destination of Wales’ constitutional journey. He picked out the devolution of criminal justice, fair funding and an end to parliamentary sovereignty. He suggested that Welsh Labour should embrace the spirit of popular sovereignty in the report and become a separate party – which the First Minister rejected.

Mick Antoniw AM (Lab, Pontypridd) didn’t believe there was any chance of major constitutional reform in the UK without reforms to parliamentary sovereignty. He called for a Speaker’s Conference as the first step towards starting a wider debate.

Huw Irranca-Davies AM (Lab, Ogmore) added that debates on this have been too Westminster-centric and sometimes continue to do so. He suggested that outreach work starts with Scotland and the directly-elected English mayors to encourage collaborative work.

Mark Reckless AM (BXP, South Wales East) found the report more convincing when it outlined the specific problems the Welsh Government have had when dealing with the UK Government, but it would be difficult to argue that the nations of the UK were truly equal:

“….the document as a whole emphasises a convention, equality, and you speak from general principles. And I think that is much harder when you consider that the UK Government and UK Parliament are not just the equivalents of the Welsh, the Scottish and the Northern Ireland institutions, but speak both for a nation, England, which constitutes over five-sixths of the population of these isles, and also for a UK Government that has all those non-devolved functions….I just wonder as to how realistic it is as an approach to demand equality from first principles….”
– Mark Reckless AM

David Melding AM (Con, South Wales Central) offered a note of caution on the definition of sovereignty and how it’s applied as outlined in the report:

“I do not share David’s concerns about sovereignty. Sovereignty is exercised, of course, by the cantons in Switzerland, and they do so in an effective way to ensure the self-governance of that confederation. We will, over the years, look at different models and seek inspiration from different ways of governing ourselves to ensure that we reach where we wish to be, and in doing so, we do, I hope, also unify the country.”
– Alun Davies AM

Sacred cows need to be sacrificed or this won’t work

Hopefully, with the report’s publication and the debate, I can shelve constitutional navel-gazing for now and get back to bread-and-butter issues, but it’s worth a brief bit of further commentary.

My concern, having gone through the report and debate, is we’re going to get bogged down in discussions about sovereignty and top-down grand constitutional structures (federalism, confederalism, confederal-federalism) which ignore the issue of where power over specific areas of public policy should lie. It’s a bit like the Williams Commission ending up being more about the local council map and less about the most effective division of powers at different tiers of government.

Decide where powers should lie first then fit the constitutional structure around it, not the other way around – or it’s just going to end up in permanent cyclical arguments over why we have powers over X and no powers over Y.

Playing Devil’s Advocate for a moment, I would argue it would be much harder to campaign for independence from a weaker UK with limited centrally-held powers over things like defence, monetary policy and foreign affairs because there would be fewer points of grievance and some of the most difficult situations that would arise regarding independence wouldn’t have to be faced. The question for Unionists is “What powers would you be willing to give up from the centre to save the Union?”  For nationalists it’s “What form of Union is at least a little bit palatable?”

If you don’t put on the table all general direct and statutory services to people, property and places (like energy, water, broadcasting, criminal justice, welfare and a whole host of minutiae reserved in the Wales Act 2017) then you’re going to have a problem getting consensus and we move a few steps closer to the Soviet Union and Yugoslavia scenarios I mentioned last time.